I hope one is right. There are a lot of situations going on in the wrestling world at the moment and the crowd problem is one of the biggest. With WWE not being allowed to have regular fans in their arena for the most part, it could be a long time since we are going to be back to normal. WWE is trying a few small things though, even if one of them might not be the most acceptable idea in the world.

At this week’s Monday Night Raw, WWE allowed a handful of fans into the arena to stand with the NXT wrestlers who have been serving as a makeshift audience. This is the first time that regular fans have been allowed at a WWE event since March. However, it was not exactly the smoothest situation in the world, though what happened is not exactly clear so far.

According to Wrestling Observer Live’s Bryan Alvarez, WWE would not allow the fans to wear medical face masks at Monday’s event. This included WWE executive Kevin Dunn telling people that they were not real fans if they wore a mask. However, according to MyNews13’s Jon Alba, fans reported to him that WWE did NOT say they were not allowed to wear masks at the television taping. Alba made it clear that he was not discredit Alvarez’s report but was only reporting what he was told.

I also want to make clear, to all of those tagging @bryanalvarez in my thread:

WWE has also released a statement on the situation, courtesy of 411mania.com:

Fans have not been in attendance at WWE events since March 13. Yesterday, a select number of friends and family were permitted to attend WWE’s TV production. These individuals were required to participate in medical screenings prior to entering the closed set at our training facility, and were kept apart from in-ring performers and production personnel. Attendance was below 20% capacity and social distancing guidelines were adhered to with at least six feet between parties, thus face masks were not required.

Can you see any masks? Check out the show with the fans:

Opinion: I could see either side of this situation being the case, as WWE has shown parts of the crowd being a lot closer than six feet apart. While no masks were shown, it does not mean that the fans were given an option to use one. This is a situation that could make WWE look rather bad if Alvarez’s reports are found to be true, but at the same time, just the visuals alone are not exactly the best.

What do you think of the situation? Which side do you think is more accurate? Let us know in the comments below. 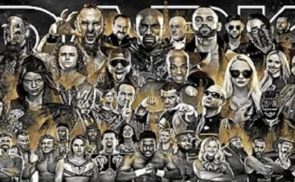