We have an interesting subject this week with Brody King, who is more of a supporting character than a top star. King has been around the company for a little while now as part of Marty Scurll’s Villain Enterprises, but I’m wondering if he has enough to get a full show. Let’s get to it.

We open with a quick look at King, including his family life. King is teaching his son to spend more time outside and teaching himself how to smoke meat. He’s also a gamer, but gets annoyed at them in a hurry. After a look at King doing yoga, we see his debut as part of Villain Enterprises in December 2018.

We’re going to start with King’s first match back from a knee injury on ROH TV, January 29, 2020.

Marty, Flip and Brody King are defending. Brody and Flamita start things off with the masked one being launched into the corner. A shoulder drops Flamita again and his chop just annoys King. Back up and Flamita manages a running hurricanrana, only to get knocked down again. Marty and Bandido come in with Bandido hitting a running dropkick. A running hurricanrana is blocked and it’s a quick standoff, with the fans being behind the luchadors.

Horus and Flip come in to continue the very formalized series of tags. A running kick to the back of the head gives Horus an early two so Flip is back with a kick to the mask. Flip sends him outside so Marty can get in a running shot and we settle down a bit. King comes in to take over on Horus with a splash giving Marty two. Back from a break with Gordon clotheslining Marty by mistake, allowing the hot tag off to Bandido.

The top rope spinning crossbody takes King down again, followed by a moonsault to the floor from Bandido with the other two hitting running flip dives at the same time. Back in and Flip gets beaten down, including Bandido suplexing Flamita into a moonsault for two. Gordon is right back with a springboard spear and it’s King coming back in to start wrecking people. Everything breaks down again and the sunset flip into a German suplex gets two on Flamita.

King kicks Scurll off the apron by mistake though and Horus is back in with his springboard tornado DDT for two. Bandido’s crucifix bomb plants King again and a Spanish Fly does the same to Flip. Horus DDTs the heck out of King again and everyone is down to a VERY warm reception from the fans. Bandido and Scurll are up for the slugout with the X Knee hitting Scurll.

Back up and Scurll tries to fight off all three challengers at once, earning himself a superkick into a moonsault slam for two. Flip and King are back in for the exchange of chops, followed by the Motor City Machine Guns’ Made In Detroit for two on Bandido. Flip and King dive onto Horus and Flamita so a triple kick to the head can get two on Bandido. Marty takes way too long loading up the chickenwing though and it’s a victory roll to get Bandido the pin and the titles at 16:47.

Next up is Cobb’s singles debut from Death Before Dishonor 2019.

They trade the power shoves to start but Cobb can’t get his hand all the way up for a test of strength. Brody is nice enough to lower his hands and they roll around without breaking the grip. An exchange of shoulders goes nowhere so Cobb counters a charge with an overhead belly to belly.

King wins a strike off though and kicks Cobb down for a running backsplash before he just stomps away in the corner. Cobb pops back up for a clothesline though and it’s a double clothesline for a double knockdown. They slug it out from their knees and trade some running shots against the ropes. A Boss Man Slam gives King two but Cobb catches him on top with a dropkick.

That means a stalling superplex for one, followed by a standing moonsault for two. King’s hurricanrana puts Cobb on the floor for the suicide dive, setting up the piledriver for a VERY close two as the announcers aren’t sure about the kickout. They trade snap German suplexes but Cobb is right back with the Tour of the Islands for the pin at 12:59.

It’s David Finlay/Juice Robinson vs. PCO/Brody King with the winners winning a tournament and a future Tag Team Title shot. King headlocks Finlay to start and then runs him over with a shoulder. Finlay gets in an uppercut though and Robinson comes in for a double suplex. Back from a break with PCO shouting at Robinson, whose running shoulders just hurt himself. The snap jabs get the same result but PCO kicks him in the chest to take over.

There’s a backsplash to crush Robinson again and a running dropkick to the back of the head puts him down. A belly to back suplex doesn’t quite work and it’s a double dropkick to put PCO down. There’s a double flapjack for the same but PCO sends them into each other. King comes back in to send PCO into Finlay in the corner, followed by the running backsplash.

We cut to a shot of commentary and come back with King chinlocking Finlay and driving an elbow into his face. PCO’s chokebreaker sets up a clothesline from King as Finlay is in trouble. King lays Finlay throat first across the middle rope and hits a cannonball but Finlay slips out of a powerbomb. The hot tag brings in Robinson to pick up the pace, including his own cannonball, which he insists is better.

Back from another break with PCO hitting a running clothesline in the corner into a DDT. The top rope splash misses though and Finlay gets the tag. The double teaming doesn’t work whatsoever though and PCO sends them both outside for a dive. Back in and a sitout powerbomb gets two on Finlay with Robinson making a save. Juice punches away at both monsters and drops King with a big left.

The same big left just makes PCO freak out and it’s a discus forearm to drop Robinson. PCO misses the Swanton to the apron though and Robinson sends PCO into the barricade. Back in and Finlay spears King down, setting up a clothesline to the back of the head for two. King isn’t having any of that though and gets in a shot to the face, setting up the Ganso Bomb to finish Finlay at 15:27.

We finish up with some quick clips of Villain Enterprises winning the Tag Team Titles.

King wraps it up and promises that the company will be back. 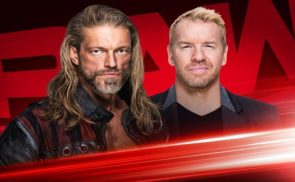