We are on the way to the Cell, which has nothing to do with this show whatsoever. 205 Live continues to be a show that is almost kind of sort of a way to advance the cruiserweights. Granted that usually means the cruiserweights not big enough to make it to NXT, but you can get a few surprises here and there. Let’s get to it.

Kendrick grabs a headlock to start and takes it to the mat as Mansoor tries to find a way out. Back up and Kendrick armdrags him down, only to get caught in a chinlock. That’s broken up and Kendrick is already looking frustrated. Mansoor flips out of a belly to back suplex and scores with a dropkick. A middle rope bulldog gets two on Kendrick but he kicks Mansoor out of the air to cut him off.

They slug it out of the corner until Kendrick pulls him down into an armbar. That’s broken up and Mansoor hits a jumping clothesline into a spinebuster, followed by a Falcon Arrow for two. The moonsault misses but Mansoor is right back up with a sitout powerbomb for two more. A quick facebuster gives Kendrick the same though and another powerbomb is countered with a hurricanrana to send Mansoor into the corner. Kendrick hits a butterfly superplex for two but Mansoor pulls him into a cradle for the pin at 8:50.

The kid is good:

Video on Jordan Devlin, the same one which aired on NXT UK. He’s been wrestling for a long time and finally reached the peak of his career. Now he’s stuck at home and he sees Santos Escobar with the Cruiserweight Title, but that belongs to Devlin. Come take it from him.

Escobar has responded via Twitter and doesn’t seem overly impressed.

We look back at the six man tag from NXT, with Legado del Fantasma beating Ashante Adonis, Isaiah Scott and Jake Atlas.

The Bollywood Boyz (the Singh Brothers) are back and Nigel McGuinness is rather pleased. They’re back and promise to bring the star power and charisma to go with the lights, camera and Bollywood action. And that’s it.

Stallion says he has a second chance to make a first impression and tonight, he’s proving himself to Nese.

The bell rings and here’s Ariya Daivari to offer a distraction so Nese can jump Stallion from behind. Daivari joins commentary as Stallion strikes away and hits a White Noise onto his knee for two. Nese is right back with a kick to the head and we hit the chinlock. That’s broken up so Nese goes with the Lionsault for two instead. The bodyscissors stays on Stallion’s ribs but he has to elbow his way out of a torture rack.

Stallion knocks him into the corner and adds a running basement dropkick. There’s a DDT for two so Nese rolls outside, only to get dropped with a moonsault from Stallion. Daivari starts yelling, so Stallion drops him with a headbutt. Back in and the Running Nese finishes Stallion at 7:25.

Post match Daivari gets in to stand next to Nese but they leave before jumping Stallion. Commentary talks about the two of them being 205 Live originals to end the show. 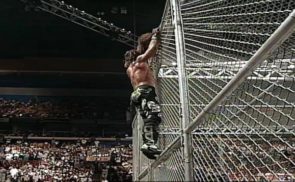 VIDEO: The Tribute You May Have Missed From Hell In A Cell