It’s time to go. The Coronavirus pandemic has changed the way the wrestling world works and that is going to be the case for a very long time to come. WWE has managed to keep Monday Night Raw and SmackDown going for a very long time now and that seems to be the case as we keep going. However, WWE may be needing to make a change sooner rather than later, so it’s time to start making some plans.

One of the bigger moves that WWE has made to deal with the Coronavirus is to move over to the Amway Center in Orlando, Florida. The show had been running out of the Performance Center in the same city and that was only going to be a viable option for so long. Unfortunately that is the case for the Amway Center as well, and now WWE is going to have to find something else.

According to the WrestleVotes Twitter account, WWE will be leaving the Amway Center on December 1, which would make the November 30 Monday Night Raw their final show in the venue. However, according to Jon Alba, the agreement could be up a week later, with the November 23 Monday Night Raw, the night after Survivor Series, being the final show. The company is currently looking at new venues in North Carolina, Texas and Illinois, but they have to find a place with no regular teams playing in the building and sufficient power available for their needs. No new plans have been announced as of yet.

ThunderDome update: source states WWE is set to leave the Amway Center by the 1st of December. Arenas in North Carolina, Texas & Illinois were discussed over the weekend. WWE needs to find a spot where NO team plays + able to house the weight & power requirements of the setup.

The contract itself has not changed between #WWE and Amway Center. With the #NBA looking to start its season in December, and the #ECHL's Orlando Solar Bears beginning play as well on approximately Dec. 11, this appears to be the end of ThunderDome's run in Orlando.

WWE has done well in the building so far. Check out how things have gone there:

Opinion: I’m not sure what WWE is going to do but they have about a month to figure it out. Maybe they can tape some things in advance, but that is only going to be a short term solution. I’m sure there are other places out there which can be used to run television, though the trick is figuring out what works best. It doesn’t have to be a full NBA sized arena, but it can’t be too small either. It’s a complicated situation, but WWE has the time and resources to make it work.

Where should WWE go? Where will they go? Let us know in the comments below.

Marty Scurll’s Future Seems To Be Revealed After SpeakOut Allegations 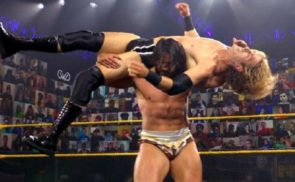