Believe it or not, then everything changed again. This time around, WWE has released almost everyone on the 205 Live roster, meaning the show could look very strange in the coming weeks. This show was taped in advance though, meaning this is going to be a pretty stand alone edition. That’s as opposed to the rest of the shows of course. Let’s get to it.

The fans are behind Ruff, even as Waller powers him to the mat and gets in the hair slapping. Back up and Ruff knocks him to the floor without much effort, meaning it’s Waller’s turn to be annoyed. Waller gets back inside and is knocked into the corner so Ruff hammers away. That takes a bit too long though as Waller reverses into an electric chair suplex for a cool counter. A slingshot double stomp to the back in the corner rocks Ruff again and Waller drops him with a tilt-a-whirl backbreaker. Ruff is sent outside so Waller teases a dive before sliding to the floor for an STO.

Waller spends a bit too much time talking trash though and Ruff flip dives off the steps to drop him for a change. Back in and Waller is fine enough for the torture rack into the Regal Roll, setting up the middle rope elbow for two. Something like a surfboard with knees in Ruff’s back keep him in trouble but he comes back up with a DDT to plant Waller. A springboard cutter gives Ruff two but he misses the frog splash. Waller loads up the fireman’s carry, which is reversed into a quick crucifix bomb to give Ruff the surprise pin at 9:39.

Non-title. They go with a crisscross  to start and it’s an early standoff. Kushida takes him down by the arm and cranks away until Sterling armdrags his way to freedom. A dropkick puts Kushida on the floor but he avoids a springboard moonsault and dropkicks Sterling’s knee.

Back in and Sterling drops him across the top rope for the running flip Fameasser. A bodyscissors goes on but Kushida turns it into a leglock to break things up in a hurry. Sterling is fine enough to break up a handspring with a kick to the back. A running hurricanrana brings Kushida back down off the top but he nails a kick to the arm. The basement dropkick is enough to set up the Hoverboard Lock to make Sterling tap at 6:11. 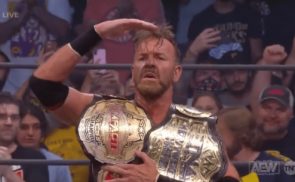