It’s the debut of the secondary show which is actually on television and not full of squashes. I’m not sure what this is going to mean for the company as a whole, but if they can put some stuff on here instead of cramming it all onto Dynamite, we could be in for something good. The card is pretty stacked tonight too so let’s get to it.

Omega, with Don Callis, is defending. They go with the feeling out process to start and Christian flips him off in the corner to start the mind games. It’s too early for both guys to hit their finisher and Omega bails to the floor for an early breather. Back in and Omega chops away but Christian knocks him to the apron for the dropkick back to the floor. Hold on though as Callis offers a distraction, allowing Omega to shove Christian down in the big crash.

We take a break and come back with Christian snapping off a snap suplex but Omega catches him on top. The superplex is broken up with a heck of a sunset bomb and Christian hammers away, setting up the stand on the back while Omega is in the ropes. There’s the right hand to the face but Omega is right back with YOU CAN’T ESCAPE into the moonsault for two. Omega knees him in the face, hits a powerbomb and nails the V Trigger for two more. Henry: “That was a heel factor like Wolverine.”

Christian grabs the rope to counter a German suplex out of the corner and avoids another V Trigger, sending Omega knee first into the buckle. The spear gives Christian two but Omega is back with a pair of snapdragons. Christian manages to snap the throat across the top though and a frog splash gets two. Callis gets on the apron for the distraction so the Young Bucks can bring in a chair. The One Winged Angel onto the chair is countered into the Killswitch onto the chair to give Christian the pin and the title at 15:25.

Result: Christian Cage b. Kenny Omega – Killswitch onto a chair (15:25)

Post break, Christian, with Jurassic Express and Orange Cassidy, is happy with his win but knows what it is going to take to beat Omega for the AEW World Title. He’s in Omega’s head though and that’s all that matters.

Del Sol, with a 1-38 record, is challenging and gets a full time contract if he can pull off the upset. Fuego tornado DDTs Miro before the bell and then does it again after the bell, sending Miro to the floor as Jericho wants to know how a luchador is from Mobile, Alabama. Miro beats the count back in and another tornado DDT gets a close two. Del Sol goes up top again but this time he dives into the Samoan drop. The jumping superkick sets up Game Over to retain the title at 1:59.

Post match, Miro rips up the contract and holds up the title.

Post break, Fuego gets up but Tony Khan (his first time ever on AEW TV outside of being seen in passing in the background) and Sammy Guevara come out. Khan hands Guevara a contract, which he brings to Fuego. Yes Fuego has been around for a long time and is like 1-50, but the people love him and now he is All Elite.

Sting and Darby Allin brood in the rafters.

Mark Henry runs a split screen interview with Red Velvet and Britt Baker. Velvet doesn’t think much of Baker attacking her with a crutch but Baker says she’ll retain the title even with a broken wrist.

Baker, with Rebel, is defending and is crazy over in her hometown. They fight over the wrist control to start, which is not a great idea when Baker has a bad wrist. Velvet takes her down but won’t stomp on the arm, which has Jericho and Taz going nuts. Back up and Velvet hits a leg lariat into a moonsault press for two as we take a break. Back with Baker going for Lockjaw but the band hand won’t let her get it in.

Velvet goes after the glove so Rebel offers a distraction, earning an ejection. A moonsault gives Velvet two but Baker is back with a curb stomp (Jericho: “That’s a real curb stomp!”). The Lockjaw is loaded up so Velvet goes for the hand. That’s fine with Baker, who goes with a reverse Lockjaw for the tap to retain at 10:33.

Post match, Baker lays out Velvet again but Kris Statlander makes the save by dropping Baker. Cue Jamie Hayter (who wrestled here way back in 2019) to jump Statlander and pose with Baker to end the show. 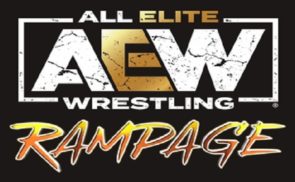 RUMOR: WWE Bringing Back King Of The Ring Very Soon