The show was starting to come together but then they brought back Ariya Daivari and my soul was stabbed all over again. For the life of me I still don’t get why he is treated as such a big deal around here but he is going to be around here no matter what until the end of time. Hopefully the other stuff on here works a bit better. Let’s get to it.

Legado del Fantasma vs. Ever Rise

Santos Escobar is here with Legado and this is the result of an open challenge from Ever Rise. Raul Mendoza and Matt Martel start things off with Martel cranking on the arm. It’s quickly off to Chase Parker to continue the arm pulling but Joaquin Wilde tags himself in for a quick DDT. The chinlock is on in a hurry and Martel starts what sounds like a DEFENSE chant.

Mendoza takes him down into a chinlock and pulls Parker down to cut off a comeback attempt. Parker fights up and shoves him into the corner though, allowing the hot tag off to Martel. Everything breaks down and Mendoza gets a blind tag to snap Martel’s throat across the top. The Russian legsweep/kick to the face finishes Martel at 5:49.

Result: Legado del Fantasma b. Ever Rise – Russian legsweep/kick to the face to Martel (5:49)

Daivari hides in the ropes to start. Atlas grabs a headlock takeover and Daivari can’t get out immediately, even as he flails on the mat. Vic talks about Daivari being a 205 Live original as Atlas keeps cranking away.

Daivari gets in a neckbreaker over the middle rope and hammers away in the corner. We hit the armbar on Atlas, followed by a forearm to cut him down again. Atlas fights up anyway and it’s a German suplex into an enziguri for two. Daivari’s hammerlock lariat misses and Atlas knees him in the face. The Blockbuster connects but Daivari bails to the floor.  That means a suicide dive but Daivari gets in a cheap shot and unhooks the turnbuckle pad. The referee doesn’t allow it so Daivari pokes Atlas in the eye and hits a hammerlock lariat for the pin at 9:21.

Take a look at greatness: 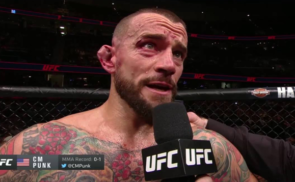