Night one of the WWE Superstar Shake-Up is in the books and now the debating begins. That debating centers on whether or not the company’s trades from SmackDown Live to Monday Night Raw are both sensible and practical.

Of course both of those definitions are subjective, because the Shake-Up is such a huge topic surrounded by many varying opinions. That’s also true now, as many of the moves made during Raw may be seen as a success to some, while a miserable failure to others. So how did it go for Vince McMahon’s company on April 15?

The Miz is back on the red brand, as the most must-see WWE superstar of all time made his presence known against Shane McMahon. Anyone who believed that the feud between these two men was over obviously thought wrong. It now appears that perhaps it’s only just beginning.

That could be a good or bad thing, depending on the point of view. Their match at WrestleMania 35 wasn’t exactly a technical masterpiece. But then again, it really didn’t need to be. It was a nasty fight with hard shots and scary bumps, all of which told the story. Miz took his game to a whole new level of intensity and if that side of him remains at the forefront, then his presence on Raw could indeed be can’t-miss programming.

Watch The Miz make his return to Raw! 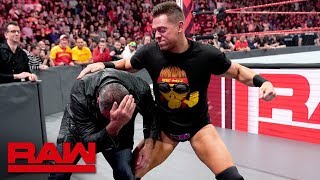 The War Raiders are now The Viking Experience, for some reason. No one really seems to know why and no one really seemed to like the move. But why should they? War Machine became The War Raiders, which was hard enough to accept. But now The Viking Experience, which sounds more like a History Channel reality competition, borders on the absurd. To make matters worse, Rowe and Hanson are now Erik and Ivar. Again, no one knows why.

On the flip side of that is the fact that Ricochet and Aleister Black have finally found a home. The NXT standouts are now officially on Monday Night Raw and their fans are surely anxious to see what happens next. SmackDown Live has historically always been regarded as “the wrestling show,” while Raw was usually just “show business.” Perhaps Ric and Black will change that perception now that they’re on the red brand.

Two men that could be part of that change is Cedric Alexander and Andrade. Alexander will make the move from 205 Live, while SmackDown’s Andrade has already made the jump. Andrade worked a very solid match with Finn Bálor, who ultimately lost in the end. While Finn’s fans are likely none too happy about him losing once again, it’s clear that he now has a much more compelling challenger for his Intercontinental Championship than Bobby Lashley ever was.

Watch The Usos bring the intensity to Raw! 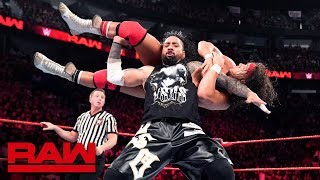 Rey Mysterio is now on Monday nights as well and the same is true of Lars. The former is a legend and future WWE Hall of Famer while the latter is only just beginning. “The Freak’s” assault on Rey is just the latest in a series of attacks that began with Kurt Angle and continued with The Hardy Boyz.

Rey is nearing the final act of his WWE career and the curtain just rose on Lars. But this confrontation could actually lead to a feud between the two men, though that’s not definite. Maybe Lars will continue to keep crushing guys every week until someone tries to step up and stop him. Maybe that someone will come from SmackDown Live?

The Usos received perhaps the best reaction of the night. The brothers came back to Raw and had the crowd ramped up as only they can. They’ve been an anchor on the blue brand and now they will certainly do the same for the red brand. Fans are surely already salivating at the prospect of a rivalry featuring The Usos and The Revival.

Jimmy Uso’s wife Naomi joined the red brand as well, as she partnered with Bayley in a winning effort against The IIconics. Bayley’s tag team partner Sasha Banks was not on Raw, as The Boss reportedly wants out of her contract. But WWE proves once again that when there’s a hole, that hole will not remain empty for long. As valuable as Banks has been to Vince McMahon’s company, it’s entirely possible that the two sides will be unable to reconcile their differences. 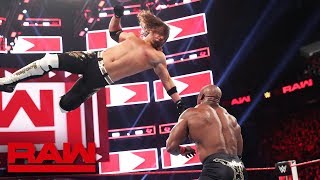 Lacey Evans and EC3 now call Raw home. But while Evans stepped up to Becky Lynch, EC3 was demolished by Braun Strowman. Both situations are indeed curious, as EC3 seems ready for the big time, yet can’t catch a break. But Lacey, who’s not ready, is now the new No.1 Contender to Becky’s Raw Women’s Championship. It’s safe to say that both cases are two of the most bizarre currently in WWE.

But the real highlight of the night belonged to AJ Styles. The Phenomenal One came out as the surprise tag team partner with Roman Reigns and Seth Rollins against Drew McIntyre, Baron Corbin and Lashley. While AJ’s main roster switch was not a surprise to many, there’s no denying that his new home could bring a whole new set of potentially career-defining matches.

While Monday Night Raw did pick up some valuable talents, it could very well be that the brand will now lose some as well. What are the chances that Reigns, Rollins and Styles will all remain on Raw? Why would the red brand need Strowman now that Lars is onboard? Will a tag team from Raw move to SmackDown to get everything back in balance?

The truth is that despite how much effort goes into making the Superstar Shake-Up work, both main rosters routinely cross paths. It happens more often than fans believed it would, but it’s happening all the same. The company wants the audience to care that certain talents change programs and sometimes it does. But until WWE can stop tampering with Raw and SmackDown’s roster and truly leave each one separate from the other, fan expectation is likely always going to be low. But unfortunately for WWE, that’s typically par for the course. 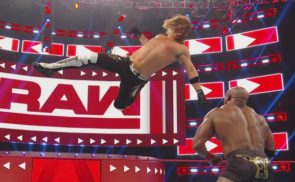 Who Got Drafted To Raw In The 2019 Superstar Shakeup?