We’re on to a big show this week with the first night of the Superstar Shakeup. In this case, that means we have a night of people moving over to Monday Night Raw, though the question is where they will go. WWE has implied that we might be seeing some names moving to shows other than just the two main ones, meaning several more doors are available. Let’s get to it.

Here’s a loudly booed Stephanie McMahon to introduce Shane McMahon. Hold on though as Mike Rome has to do Shane’s big introduction. Shane even does it in French, though he does wait for the fans to get done chanting CM PUNK. Before we get to the first pick, let’s look at some stills of Shane McMahon beating up Miz’s dad. Stephanie goes to introduce the first star but Miz cuts him off, which might be a move over to Raw. The announcers say that Miz is on Raw as Shane beats him up, only to come back with a chair shot. Shane bails as a bleeding Miz stands tall.

We look at Seth Rollins beating Brock Lesnar for the Universal Title at Wrestlemania.

We look at Seth Rollins beating Brock Lesnar for the Universal Title at Wrestlemania.

Black and Ricochet are officially on Raw. The Viking Experience are the War Raiders, now called Ebar and Erik. Hawkins and Ryder work on Dawson to start but it’s quickly off to Black for some kicks to the arm. The Vikings get to take turns on Black until Dash drives him into the corner. Ricochet comes in but it’s already back to Black as everything breaks down. The champs and company clean house and we take a break.

Back with Erick (Rowe) getting slammed onto Hawkins and getting caught in an armbar. Revival gets to take their turns until Hawkins dives over for the tag off to Ryder. Everything breaks down and the middle rope Rough Ryder gets two on Erik and Ricochet misses a moonsault to the floor on Dawson with the camera not being able to hide it. That leaves Hawkins to be launched over the top onto Black and Ricochet, followed by Fallout to Ryder for the pin at 13:25.

Cedric Alexander is coming to Raw.

Andrade is making his Raw debut and has Zelina Vega here for his introduction. After some yelling in Spanish and French, Andrade starts fast with the running knees in the corner. Balor is right back with a faceplant but they head outside with Andrade sending him face first into the apron as we take a break.

Back with Andrade going after his knee but getting caught with a reverse DDT. Andrade hits his cartwheel backflip DDT (with Balor just standing there watching) but the moonsault into a moonsault hits knees. Balor goes up for the Coup de Grace but has to roll through, allowing Vega to offer a distraction. The running flip dive hits Almas anyway but Vega offers a quick distraction and snaps off a hurricanrana. Back in and the hammerlock DDT finishes Balor at 10:19.

We look at John Cena and Undertaker attacking Elias.

Here’s Elias to play Undertaker’s theme and say that he will be ready for Undertaker next time. If anyone interrupts him tonight, it’s the last time they’ll be able to show their face on Raw. Cue Rey Mysterio to chase Elias off without much trouble but here’s Lars Sullivan to beat him up, including the Freak Accident. Rey takes a running sitout powerbomb for a bonus.

The Usos are a surprise, or at least they would be if Roode and Gable didn’t have a graphic underneath them saying THE USOS. Gable takes Jimmy down with an armbar as the fans are behind the twins. The Usos fight back up but Jey gets kneed to the floor where Roode hits a knee of his own. The villains start alternating on Jey with Roode grabbing a chinlock. A jumping chinlock is enough to bring in Jimmy and a Blockbuster/German suplex combination puts him down for two. Back up and everything breaks down with the Usos firing off superkicks, setting up the Double Us to pin Gable at 5:22.

Here’s Alexa Bliss for a Moment of Bliss with Sami Zayn. He gets such a strong reaction that his music plays again so he can soak things in a second time. They do it a third time and Sami calls them fish in a barrel. He turns it up a notch by shouting in French and starting the OLE chants. Bliss says it’s great to have him back on Raw and the fans start a OUI chant.

Sami talks about all the things he’s done in this city over the week and while he loves the place, he can’t stand the people. He hates everyone here and didn’t want to do this show. Alexa: “So rude.” The cheers make him a bit sick so the fans let him have it with a chant in French. This used to be his town but now he’s moved to sunny Orlando, Florida. He chose to leave here before and now he’s choosing to leave here again right now.

Non-title.  Fallout from Bayley not being able to get Sasha Banks on the phone and needing a replacement. Bayley kicks Billie into the corner to start and hands it off to Naomi for the forearms. Peyton’s chinlock doesn’t last long and it’s Naomi kicking Billie in the face. A Bayley to Belly takes out Peyton and the split legged moonsault finishes Billie at 2:01.

Strowman runs him over and beats EC3 up the ramp. That means a toss into the set, which nearly breaks into pieces. A chokeslam off the stage through a piece of wood destroys EC3. No match.

We look back at some of the bigger events from tonight.

Eric Young has been moved to Raw as well.

Non-title. Becky pounds her down to start and pulls Ruby away from the ropes for a crash. A baseball slide puts Riott on the floor for a clothesline from the apron. Back in and Ruby chokes on the ropes a bit and kicks in the corner but Becky is right back with running clotheslines. The Bexploder but gets pulled off the middle rope for a crash. Ruby’s falling backsplash gets two, only to have Becky come right back with the Disarm-Her. After dispatching the rest of the Squad, Becky makes Riott tap at 4:29.

Drew McIntyre, Baron Corbin and Bobby Lashley don’t care about who is teaming with Seth Rollins and Roman Reigns tonight because they’ll run them off Raw.

Post break Becky is still in the ring and here’s Natalya to interrupt. Natalya talks about being a pioneer of the women’s division with Becky, Charlotte and Ronda Rousey getting to make history. Last week Becky talked about having to sleep with one eye open, but Natalya is here to challenge a wide awake Becky for the Raw Women’s Title.

That’s fine with Becky, who has been in the trenches with a lot of talented people. The two of them fought to get here and look at them now. This brings out Lacey Evans, who knows how to be a lady and curry influence. Now that she’s on Raw, she wants the Raw Women’s Title so she’s got a #1 contenders match with Natalya. Becky better watch because a lady can teach a man a thing or two.

Natalya starts fast with her belly to back drop and a botch of the step over dropkick to the back. Lacey is sent outside and we take a break. Back with Natalya fighting out of a neck crank but getting sent face first into the middle buckle. The chinlock goes on and Lacey drops a knee to keep her in trouble. Natalya fights up and grabs the Sharpshooter, sending Lacey to the rope, which she makes on the second attempt. After being rammed into the barricade, Lacey is right back with the Woman’s Right. The springboard moonsault finishes Natalya at 9:35.

Rollins and Reigns say you have to wait to find out their partner tonight.

We get another creepy vignette, this time with a dollhouse and a laughing doll sitting in a rocking chair.

The mystery partner is….AJ Styles. Lashley runs into Seth’s boot to start and it’s Reigns coming in for an uppercut. AJ hits his dropkick and it’s off to McIntyre, which is a heck of a showdown. That sounds a little too fun so here’s Reigns instead, with Drew suplexing him down. Drew sends him outside for a ram into the barricade as Corey talks about Corbin having all the necessary tools.

Back in and Corbin’s chokebreaker gets two as we take a break. We come back with Rollins getting two off a sunset flip to Corbin but it’s too early for the Stomp. Instead the suicide dive is blocked with a right hand and a faceplant gets two. The Blockbuster gets Rollins out of trouble and it’s a hot tag off to AJ to strike away on Lashley. Everything breaks down and some Pele Kicks drop Lashley and Corbin.

The Styles Clash is broken up with a Claymore and McIntyre throws Reigns with a suplex. McIntyre misses another Claymore and falls over the barricade, leaving Lio Rush to catch Styles’ springboard with his spinning Dominator. That’s broken up with the Stomp into a spear, leaving AJ to hit the Phenomenal Forearm to finish Lashley at 12:48.

The winners celebrate to end the show. 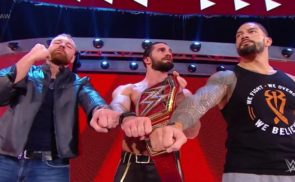 One More Time (For Real). Shield’s Final Match To Air On WWE Network As Live Special, Plus A Bonus Match.