WATCH: Kevin Owens vs. Roman Reigns From Roadblock: End of the Line 2016

A true friend? WWE has posted a new video to their YouTube channel in which they show the full match between Kevin Owens and Roman Reigns for the Universal Championship from Roadblock: End of the Line 2016.

Whether he was torn up about his strained relations with Chris Jericho or just looking to play mind games with Reigns, Owens started the contest by evading The Big Dog. That plan worked for a bit — until Reigns’ fist swiftly met the WWE Universal Champion’s face with a firm punch to the kisser.

From there, The Guy and KO went back and forth in front of the WWE Universe in Pittsburgh, with momentum shifting several times over. KO seemed to have victory in hand when he dished out three vicious Frog Splashes (one onto the announce table, the second crashing him through it and the third in the ring for a near fall), but Reigns would not be derailed.

Instead, The Big Dog rallied back, weathering Owens’ storm and connecting with a big Spear. However, controversy arose when Jericho arrived and, after a few moments of contemplation, delivered a Codebreaker to his best friend Owens. The act led to the official calling for the bell, and awarding the DQ victory to KO.

It seemed that Jericho and Owens’ friendship had reached the end of the line, but it became clear that Jericho, in a clever ruse, had delivered the DQ-inducing blow on purpose so his buddy could retain the title.

This was a great storyline with Chris Jericho and Kevin Owens throughout this time in WWE history. Y2J costing Owens the championship was a sneakily brilliant tactic: was he trying to go after his friend, or intentionally get him DQed to give him the belt back? 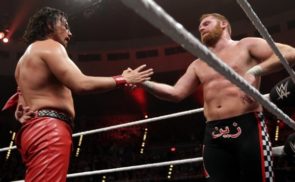