The King of Strong Style has arrived. WWE has posted a new video to its YouTube channel in which they show the full match between Shinsuke Nakamura vs. Sami Zayn at NXT Takeover: Dallas in 2016. This was Nakamura’s debut match under the WWE banner.

Quickly, Nakamura’s Strong Style pedigree shone through as he battered Zayn with hard knees to the midsection and boots to the face. Zayn fought back, diving over the ropes onto Nakamura on the floor, then drilling him with a brutal Michinoku Driver back inside the ring. Once both Superstars were back on their feet, they began trading forearm strikes, one of which drew blood from the nose of Nakamura. Zayn downed his foe with a hard clothesline, but was soon caught in a cross armbreaker, which Nakamura transitioned into a Shining Triangle hold.

The leader of the Zayniacs withstood the punishment, escaped and even managed to lock Nakamura in the Koji Clutch. He misstepped moments later, however, when he went for a DDT through the turnbuckles, only for Nakamura to rock him with a kick to the head. After a fiery exchange that prompted the NXT fans to chant “Fight forever,” The King of Strong Style evaded Zayn’s exploder suplex into the corner and flew off the top rope with a vicious knee to the back of Zayn’s head. Seconds later, he followed up with the Kinshasa knee strike, named after the city in Zaire where George Forman and Muhammad Ali’s famous Rumble in the Jungle took place, and pinned NXT’s longtime ace.

I remember watching this debut match from Nakamura and instantly knew how special he was. He has had a number of ups and downs since his time on the main roster, but if he is ever allowed to go back to this character, he could be the WWE Champion in a heartbeat. What a talent and what a match! 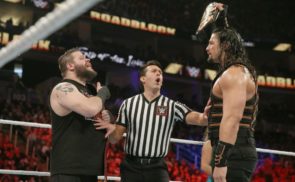 WATCH: Kevin Owens vs. Roman Reigns From Roadblock: End of the Line 2016 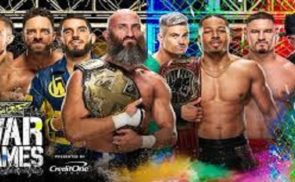