After many months of speculation and rumors, all questions have finally been answered.

Earlier today, WWE broke the following news via Twitter, indicating that Goldberg will face Brock Lesnar at the 30th anniversary of “Survivor Series.”

This will be Goldberg’s first match in a WWE ring in over 12 years. His last match was at WrestleMania XX in 2004, where, ironically, he defeated Brock Lesnar.

Ever since it was announced that Goldberg would be a playable character in the WWE 2K17 video game, speculation has been running rampant that the two were on a collision course for one more match. The reason for this is because in the initial promo for the game, you can see Goldberg staring intensely at a sign that says “Suplex City.”

These rumors picked up steam when “The Man” appeared on ESPN’s “Off The Top Rope” with Jonathan Coachman. He continued to tease a match with Lesnar, saying that if he was going to have one more match, he wanted it to be against “The Beast.”

After Paul Heyman called out Goldberg on “Monday Night Raw” two weeks ago, “The Man” made his long-awaited return to the company, to accept Heyman & Lesnar’s challenge for a fight.

Let the fun and games begin!

Are you excited about this match? Who do you have as the winner? Leave us a comment either below, or on our Facebook page! 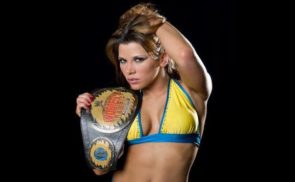