Not so fast. There are a lot of problems with WWE at the moment and they have several things they need to fix. One of those things is their television audience, which has fallen most of the way through the floor in recent weeks. The numbers have gone down further than ever before and it could take a lot of work to get them back up. One thing that could make it work is taking away something advertised, which seems to be the case again.

One of the major attractions at the Extreme Rules pay per view was Dolph Ziggler challenging Drew McIntyre for the WWE Championship in a match where Ziggler got to choose the stipulation. That led to some intrigue about what Ziggler might have up his sleeve and what he might use to try and take the title from McIntyre. It was a nice idea, to the point where WWE was going to try it again on the July 27 Monday Night Raw, but with the roles reversed. However, there is going to be one more big change.

The WWE.com preview for the match is now listing it as non-title, despite previously being announced as a title match last week. There is no word on why the change was made. This time around McIntyre will be the one choosing the stipulation, which Ziggler allowed him to do in order to secure another shot at McIntyre’s title. Just like at Extreme Rules, the stipulation will not be announced until the start of the match.

So how did we get here? Check out their history together, plus the challenge for the match:

Opinion: This is one of those things that I can’t comprehend. Both shows were taped in advance, yet they still need to make a change? That very well may be a big root of WWE’s problems: how can they not have things more together than this? If you want to make it non-title then fine, but don’t tell the fans they will be seeing a title match and then pull it away for no given reason.

Why did WWE make this change? What will McIntyre pick? Let us know in the comments below. 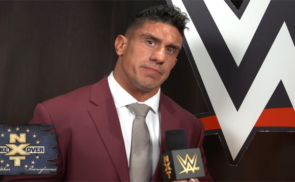