They really need that? WWE has been around for a very long time now and has put on more events and shows than anyone could reasonably count over the years. That means there have been all kinds of moments throughout the years, some of which are all time classics. WWE loves to look back on its own history, and that is what they are doing again, but with a not that normal twist.

According to Wrestlingnews.co, WWE is using old footage for their modern video packages. This includes using footage from John Cena returning as the Dr. of Thuganomics in 2012 as part of a package on Madcap Moss vs. Happy Corbin from WrestleMania Backlash, and footage from the Eddie Guerrero tribute show as part of a Stephanie McMahon segment on WWE Evil. There is no word on how many more times WWE has done something like this.

During the Madcap Moss/Corbin video recap, WWE used crowd shots from 2012 from John Cena’s return as the Dr. of Thuganomics. They have been doing more of this lately. pic.twitter.com/Vg2vd4f3IQ

The crowd shot shown here on WWE Evil is from the Eddie Guerrero tribute show. Nothing to do with Stephanie McMahon. pic.twitter.com/w9R2TqxUUP

Opinion: The fact that WWE’s stories are now requiring the use of old footage to make it seem like fans care about them sounds like quite the problem. If you need to import old clips to make your show work, it might be time to make a change that makes the fans care a little bit more. This is hardly some terrible problem, but it isn’t the kind of thing that makes WWE look great.

What do you think of the move? How can WWE fix their issue? Let us know in the comments below.

Switch Em? SmackDown Star Might Have Been Sent To Monday Night Raw 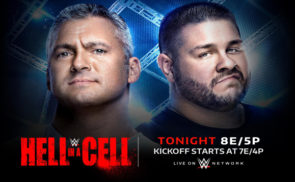 REVIEW: Hell In A Cell 2017: The Shane McMahon Does Something Stupid Show