WATCH: WWE Broadcasters Are REALLY Happy At Money In The Bank

They seem to be fans. There are certain moments in wrestling that get fans’ emotions going. It can be a lot of fun to see someone getting to do something that makes things interesting but they are pretty rare. You know them when you see them though and that seemed to be the case last weekend. It was so good that even the commentary team got excited.

At WWE Money In The Bank, Liv Morgan won the women’s Money In The Bank briefcase and cashed in on the same night, defeating Ronda Rousey to become the new SmackDown Women’s Champion. WWE has released a video from the announcers’ table, showing Pat McAfee and Michael Cole’s reaction, with the two of them jumping up in excitement over the cash-in and title change.

I’d call it a win. Check out how Cole and McAfee reacted: 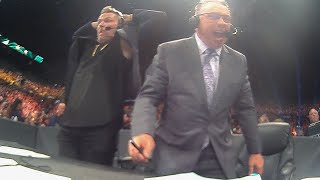 Opinion: Other than maybe a few glimpses, you might not have seen these reactions at the pay per view. WWE putting out the video made for a great visual, even if commentary was likely told to do this in the first place. It was a fun moment and Morgan has been chasing her big win for a long time, though I would hope that WWE has something else planned for her in the future.

What did you think of the title change? What is your favorite commentary team? Let us know in the comments below.

Group Effort: AEW Roster Reportedly Stood Up For Wrestler To Prevent His Departure