You can be eliminated either over the top or by pin/submission. Hall interrupts the ridiculously long entrances with the survey to keep this show going even longer. The NWO factions brawl while Goldberg hides in the corner. That lasts about fifteen seconds before Goldberg goes after Giant, which should have been a regular match tonight in the first place. Again that doesn’t last long and the match breaks down into a regular battle royal.

Hall loads up the Outsiders’ Edge on Goldberg but gets backdropped out. Nash eliminates himself (you can’t make up jokes like this) and goes after Hall as Goldberg spears Hennig down. Things get slow again with no one trying for an elimination. Goldberg finally pounds on Giant but gets headbutted back against the ropes. The fans chant for Goldberg as Giant takes him down with a Russian leg sweep. Norton breaks up a Scorpion attempt on Hennig to keep the crowd bored.

Goldberg spears Konnan and throws him out before getting kicked in the corner by Giant. The NWO keeps fighting and Goldberg goes right back to the corner to wait for the next victim. It’s a short wait this time as he spears and eliminates Hennig before clotheslining Sting and Norton to the floor as well. We’re down to Luger, Giant, and Goldberg but there’s a spear to Luger so Giant can dump him. A chokeslam puts Goldberg down but he does the Undertaker sit up and it’s a spear and Jackhammer for the win.

I have to admit that when I was growing up and I heard that this match was going to happen, I was very intrigued and couldn’t wait for it.  But now, watching it back more than 20 years later, I realized that when the entrances take about as long as the actual match itself, you have a giant (pun intended) problem.

Up And Down: WWE Gets Some Good News And AEW Gets Some Bad News 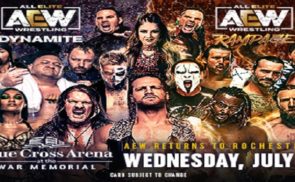