For the first time. Title changes can make a huge difference in a wrestler’s career as you can see them moving up the ladder right in front of your eyes. It can be the kind of thing that reallys tarts a career in a huge way. That might have been the case again this week, as a young and upcoming star finally got his hands on some gold in some pretty impressive fashion.

This week’s AEW Dynamite featured Wardlow defeating Scorpio Sky in a street fight to become the new TNT Champion. The win markes Wardlow’s first title of any kind in AEW. The match came about after Sky cheated to retain the title over Wardlow in their previous match. Sky’s loss ends his second title at seventy days, having won the title on the April 27 edition of Dynamite.

Opinion: Wardlow had to win something and this is as good of an idea as they had for him at the moment. He gets a championship and has officially accomplished something in AEW. I’m not sure where he goes next, but lining up one villain in a row to come after his title should be a good way to start. Sky needs to move on to something else, but a rematch with Wardlow wouldn’t surprise me.

What do you think of Wardlow’s title win? How will his reign go? Let us know in the comments below. 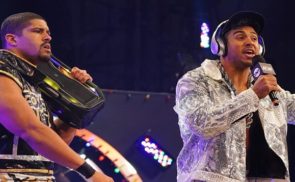