I’m sure nothing could go wrong with this plan. The world is in a very unique situation at this point and the United States is right in the middle of it. With the spread of the Coronavirus basically shutting the world down all at once, it is not clear how things are going to go or when we could get back to normal. The federal government is working on solutions, and it turns out that wrestling is involved.

One of the most complicated parts of the entire situation is trying to find a way to bring the United States economy back to life. At the moment, with the country on lockdown, there is only so much that can be done to bring things back to normal. It is a situation that needs some new ideas and that is where professional wrestling, and Vince McMahon in particular, comes into play.

During his Tuesday press conference, President Donald Trump announced that he would be consulting with a variety of sports figures to discuss reopening the United States and bringing it out of it’s lockdown. These names includes McMahon, plus several other league heads and team owners throughout major American sports. There is no word on how much influence or say these people will have in the final decision making process.

It’s a big list. Check out Trump’s announcement, plus some of the other members being involved in WWE:

Opinion: There are several people on this committee but at the same time, it might not exactly instill confidence in people looking for the best answers. Throw in the fact that McMahon’s football league literally declared bankruptcy the day before and it isn’t exactly looking like the most promising idea. I’m sure the sports figures won’t have a great deal of influence, but if that’s the case, why bring them up in the first place?

What do you think of this? What will happen to WWE in the long run? Let us know in the comments below. 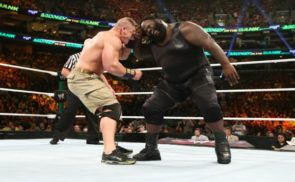 WATCH: John Cena vs. Mark Henry From Money In The Bank 2013