We’re still in Orlando and that seems to be because Vince McMahon is (possibly rightly) scared of the television networks and that means everything is going to be live going forward. I’m not sure what to expect this week but we’re on the road to Money in the Bank because that show will work in the Performance Center. Let’s get to it.

We look at a recap of Drew McIntyre winning the Raw World Title at Wrestlemania.

Here’s Drew for his first appearance on Raw as champion. Drew gets right in front of the camera and says thank you before talking about how the internet can be negative, but even there people have seemed to be positive. He won the title at Wrestlemania and then Big Show came out and wanted a title match then and there. We see a clip of the Big Show title match and Drew says anyone in the back can come get a shot.

Cue Zelina Vega and Andrade, with Zelina saying this is the real champion. She is sorry for cutting off his Braveheart rah rah speech but brings up their NXT Title match where McIntyre lost to Andrade. McIntyre says they can do title vs. title tonight so Andrade promises to win again.

Money in the Bank Qualifying Match: Ruby Riott vs. Asuka

Asuka starts dancing a lot and then pulls on the arm. An armbar into a keylock sends Ruby bailing to the ropes so Asuka sends her shoulder first into the buckle. Choking on the ropes and the hip attack put Riott on the floor and that means the sliding knee to the face. Ruby manages to send her over the barricade but Asuka gets in a kick to the head. Some dancing takes us to a break and we come back with Riott kicking Asuka to the floor for two back inside.

Back up and Asuka kicks her down again, setting up the cross armbreaker. That’s broken up so Ruby tries the Riott Kick, only to get suplexed down. A Shining Wizard gives Asuka two more so Riott hits a running clothesline to the back of the head for the same. Ruby goes up but dives into the Asuka Lock, which is countered into a rollup for two and the break. A Flatliner into the Rings of Saturn with kicks to the face has Asuka in trouble but she reverses into the Asuka Lock at 13:03.

MVP is in the VIP Lounge in the back and explains that next week we will have three Money in the Bank qualifying matches. Next week it’s Rey Mysterio vs. Murphy, Aleister Black vs. Austin Theory and Apollo Crews vs. MVP.

Lorcan grabs a waistlock to start so Black is quickly out with a waistlock. Black moonsaults over Lorcan and we take a break. Back with Black avoiding the half and half suplex but getting hit in the face for two. A full nelson keeps Black in trouble but he pulls Lorcan into a triangle choke. That’s broken up as well so Black kicks him in the face, setting up Black Mass for the pin at 9:36.

We look back at Becky Lynch retaining at Wrestlemania.

Here’s Becky for a chat. Becky talks about getting in Shayna Baszler’s head and how she isn’t going to be messed with like she messes with everyone else. She’s here to challenge the woman in Money in the Bank who wants it most. Whoever thinks they can beat her, she’ll shock the world.

Andrade and Zelina Vega are ready to show what a real dominant title reign is.

Baszler takes her down and hammers away MMA style until the referee drags her off. Baszler stomps on the arm and the referee stops it at 52 seconds.

Post match Baszler is ticked off and storms to the back through the seats instead of through the ring.

A stoic Seth Rollins talks about his career being crucified.

Tozawa fights up and kicks Theory to the floor, setting up the big flip dive off the apron and Theory is in trouble. Lawler: “Like a Ramen Noodle moonsault.” Back in and a missile dropkick gets two on Theory and the Octopus goes on. That’s countered into the ATL (TKO) to finish Tozawa at 7:12.

We look at a clip from Drew McIntyre’s Chronicle special on his way to the main event of Wrestlemania.

Rey Mysterio wants to be Mr. Money in the Bank. He has been cashed in on before but now he’s going to be the one cashing in.

Miles tries a dropkick to start but Garza dropkicks him out of the air in a cool spot. Garza TAKES OFF HIS PANTS and hits a basement dropkick, followed by some Spanish into the camera. A seated abdominal stretch goes on, followed by a kick to the chest and the Wing Clipper to finish Miles at 2:29.

Post match Vega sends out Theory and Andrade for another beatdown, including another hammerlock DDT out of the corner.

The Kabuki Warriors dance in and laugh at the idea of anyone else winning Money in the Bank.

Drew McIntyre looks down at a scar on his arm left by a surgery after his title loss to Andrade. Tonight, it’s a Claymore.

Sane gets thrown around to start as Asuka is VERY excited in the back. Back to full screen and it’s a clothesline into a toss around by the hair. A gorilla press into a Samoan drop (the Annihilator) finishes Sane at 2:36.

Here’s Charlotte to talk about how she got here as NXT Women’s Champion. She (referring to herself as the Queen) won the Women’s Royal Rumble and got to choose an opponent. We’ve seen her vs. Becky Lynch and her vs. Bayley over and over but it was Rhea Ripley coming to the ring and challenging her. That took guts and it reminded her of someone she knows.

Rhea was the next big thing but Charlotte is the biggest thing. Vince McMahon knew that last year when he had her save the main event of Wrestlemania. There is always going to be someone stronger, faster and better and she is going to teach that to NXT, starting with Io Shirai. Everyone bows down to the Queen.

We look at Lana costing Bobby Lashley his match against Aleister Black at Wrestlemania. After the show, Lashley said he thought he needed new management or a new wife.

Bobby Lashley vs. No Way Jose

Lashley elbows him in the face as Lana screams a lot from ringside. With Jose down, Lashley goes outside and asks Lana to shut up. Jose gets in a right hand but walks into an overhead belly to belly. A spinebuster sets up the spear to finish Jose at 2:46.

Rollins says the non-believers have left him no choice. Tonight, he stomps out all doubt.

Ricochet starts fast and hits a dive to the floor, followed by a tornado DDT from Cedric back inside. We settle down to Erik getting caught in a front facelock but he rolls to the floor for a breather. Alexander misses a dive so Erik runs back in for the tag to Ivar. That means Ricochet is thrown at Cedric in a SCARY landing but Ivar dives onto both of them anyway as we take a break.

Back with Alexander taking a bunch of knees to the face, plus Erik slamming Ivar onto him for two. Alexander scores with a cartwheel into a dropkick and a jumping Flatliner really gives him a breather. It’s off to Ricochet to clean house, including a running shooting star press for two on Erik. The Neuralizer misses though and Erik knees Ricochet in the face. Ivar comes back in with the seated senton and Erik drives him into Cedric in the corner for two.

The belly to back suplex/middle rope springboard clothesline gets two with Ricochet having to make a save. That earns him a spinning kick to the face and a Viking Experience (almost a pop up World’s Strongest Slam instead of a powerslam) finishes Cedric at 13:46.

The Street Profits officially introduce Bianca Belair and then give a history lesson on vikings. That gets two thumbs up but Bianca says nu uh because they have never beaten the Raiders. Now stop with the games and get that smoke.

Non-title and Andrade has everyone with him. McIntyre starts stomping away in the corner early on and even catches Andrade with a kick to the chest for trying to jump over him. They head outside with Andrade bouncing on top of the barricade. A Garza distraction lets Andrade pull him into the post though and the chops are on. McIntyre’s arm is sent into the steps and it’s an armbar back inside.

The armbar over the rope keeps McIntyre in trouble and a shot to the arm breaks up a suplex attempt. McIntyre boots him in the face though and hits a top rope shot to the head into a nip up. A spinning back elbow rocks McIntyre but he’s fine enough to backdrop Andrade onto Theory and Garza. Back in and Vega’s distraction lets Andrade crotch him on top but McIntyre escapes the hanging DDT. There’s the reverse Alabama Slam into the Claymore for the pin on Andrade at 5:31.

Post match Garza chop blocks McIntyre and here’s Seth Rollins to superkick the champ. A pair of Stomps to McIntyre ends the show. 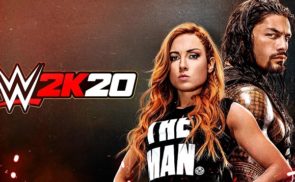 RUMOR: WWE Takes Another Hit Due To Coronavirus