Welcome back. NXT is a promotion unlike almost any other. While it serves as WWE’s official developmental territory, NXT also runs as its own weekly show. That means it is going to have a revolving door of wrestlers, with some being more successful than others. Sometimes a wrestler needs a little change up to make things better and that is what we are seeing this time around.

Back in September, things started to go badly for Austin Theory. After returning to NXT following a quick run on Monday Night Raw, Theory went on a losing streak, often losing matches in just a few minutes. On October 21, Theory lost two matches in a row to Bronson Reed and quit the company as a result. Theory has not been seen since, but that all changed this weekend.

On Sunday at NXT Takeover: WarGames 2020, Theory returned, revealing himself as the Ghostface who has been helping Johnny Gargano in recent weeks. Ghostface attacked Damian Priest during a triple threat match to help Gargano regain the North American Title, revealing himself as Theory after the match. There were several other Ghostfaces during the match but only Theory was unmasked.

You might not remember Theory. Check out what he has to offer:

Opinion: I’m rather glad to see Theory back as he is one of the most naturally talented young wrestlers I’ve seen in a good while. He has the lock, the size, the charisma and the talent to make this work well for him and hopefully he gets a nice push as a result of being associated with Gargano. Anything is better than the losing streak and the surprise return was well done.

What did you think of Theory’s return? What is next for him? Let us know in the comments below. 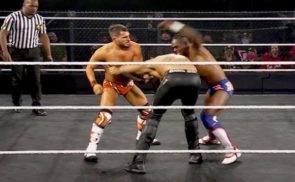