It’s a tag team show this week as the Usos are reuniting to face the Street Profits, marking their first match as a team in about fifteen months. Other than that, the Mysterios are defending the Tag Team Titles against Dolph Ziggler and Robert Roode because this feud must continue due to reasons. Let’s get to it.

The Usos are ready for their first match back but here is Roman Reigns to interrupt. Reigns wants to know their endgame, with Jimmy saying the goal is to win. They want the Tag Team Titles next to Reigns’ Universal Title so they’ll have all the gold. Reigns is behind them and says good luck. Jimmy leaves and Jey looks worried, so Reigns asks if Jimmy is doing the talking for Jey now. Jey says he’s with Jimmy tonight but he’s with Reigns too. Reigns says he should go tell Jimmy, so Jey leaves too.

Before the match, the Profits talk about how they had some fun with the Usos last week but now it’s time to get a little more serious. They were flattered by the challenge but they have been down since day one too. The Profits remember everything the Usos have been doing over the years, but these are some different Usos tonight. They haven’t been together in a long time and now Roman Reigns is living rent free in Jey’s head. Cue the Usos and we’re ready to go.

Well hold on actually as the Usos brag about their accomplishments and say a win here means they’re a step closer to getting the titles back. Angelo Dawkins doesn’t like the idea of being a stepping stone so they make a bunch of Mario references before we go to a break before the match.

Dawkins runs Jimmy over to start and it’s off to Ford, who wants to face Jey. That takes a little time to get going, so it’s a delay before Ford can armdrag him into an armbar. A double suplex lets Dawkins grab his own armbar but it’s off to Jimmy in a hurry. Jimmy hits a jumping forearm in the corner to take over and there’s a headbutt to keep Dawkins in trouble.

Jimmy comes back in and gets armdragged down, allowing the tag off to Ford. A double clothesline puts the Usos on the floor and Jey is sent into the timekeeper’s area. Jimmy goes over the announcers’ table and we take a break. Back with Ford ax handling Jimmy’s arm but Jey makes a blind tag and pulls Ford tot he floor. That means a toss into the barricade and the chinlock back inside as we see Roman Reigns watching in the back. A snap suplex gives Jimmy two and it’s back to Jey for a wishbone.

Ford manages a step up enziguri to send Jey outside so it’s Jimmy grabbing the legs. That’s fine with Ford, who nips up and hits a jumping enziguri to drop Jimmy as well. The diving tag….misses as Jey pulls Dawkins to the floor. Jimmy hits the Samoan drop and we take another break. Back again with Jey’s superplex being broken up and Ford hitting another enziguri. They clothesline each other though and that’s a double knockdown. Dawkins and Jimmy both come in with Dawkins sending him right back to the apron.

This time it’s Jimmy hitting an enziguri of his own but a right hand knocks him onto the top. Ford hits a heck of a running flip dive to drop Jey, leaving Jimmy to superkick Dawkins for two. The running Umaga attack is blocked and Dawkins’ double underhook swinging neckbreaker gets two, leaving him stunned. The spinebuster sets up the Cash Out but Jey pulls Jimmy out of the way. A low superkick finishes Ford at 21:46.

Robert Roode and Dolph Ziggler blame their loss on Rey Mysterio going nuts to protect his son at Backlash. Tonight is going to be different because they are a couple of aces.

Joined in progress with Morgan coming in to….mess up a wheelbarrow toss to send Riott into the corner. Riott sends Natalya face first into the buckle for two and the chinlock goes on, as we see Tamina down on the floor thanks to an attack before the bell. Natalya can’t get a double Sharpshooter but Tamina is back up to break up a cover. The hot tag brings in Tamina, who gets forearmed by Riott. That’s broken up with a shove to send Riott throat first into the bottom rope. Morgan hits a Codebreaker on Natalya on the floor as Riott gets shoved off the top to set up the Superfly Splash for the pin at 3:57.

The Usos come in to see Adan Pearce and get a Tag Team Title shot next week against the winners of tonight’s title match. Jimmy is pleased but Jey looks very unsure.

Non-title. In the back, Carmella says she has this and mocks Kayla Braxton’s dress. She says Bianca won at Wrestlemania in a bit of a shady way but Carmella has won a lot of things over the years. Tonight, it’s time to end Belair’s happily ever after. Hold on again as here is Bayley to join commentary. We get going with Belair driving her into the corner for some shoulders to the ribs. There’s a flying headscissors to put Belair on the floor so Carmella follows, only to get shouldered down.

Bayley keeps talking about Belair’s hair as Carmella is pressed back inside. Carmella gets in a cheap shot to set up an X Factor onto the apron for two. Some elbows in the corner keep Belair in trouble and we hit the chinlock. That’s broken up in a hurry with a backbreaker, followed by a handspring moonsault for two. Bayley rants about Belair’s hair again as a missed charge lets Carmella hit a superkick for two more. The Code of Silence can’t go on so “Belanca” according to Cole (Bayley: “BELANCA??? YOU STUPID IDIOT!”) hits the KOD for the pin at 5:41.

Post match Belair poses with the title and Bayley laughs hysterically (Bayley: “LAUGH WITH ME!”)

The Mysterios promise to win tonight.

Here is a ticked off Seth Rollins to call out Cesaro for a fight right now. There is no Cesaro but Rollins isn’t going to let that ruin his birthday. We see a clip of Rollins attacking Cesaro last week to make his already banged up arm even worse, including when Cesaro was on a stretcher. Back in the arena, Rollins has exclusive audio from Cesaro’s hospital room and it’s…..I believe some kind of bodily function.

Rollins cracks up but then gets serious to talk about how unfortunate last week was. It was a scary situation and some of the blame has to be placed on the people at home. The fans are the people who made Cesaro believe he could disrespect Rollins, whose hands are clean. Rollins sings himself Happy Birthday to wrap this up.

Non-title and Commander Azeez is here with Crews. Owens sends him into the corner in a hurry and hits the Cannonball into a Swanton for a fast two. A superkick looks to set up the Pop Up Powerbomb but he has to settle for the Stunner instead. Azeez nails Owens for the DQ at 1:14.

Commentary makes it clear that Crews is still champion, mainly due to it being non-title. Owens can’t breathe after the Nigerian Nail so referees and agents come down to confirm that he in fact cannot breathe.

Jey Uso comes in to see Reigns, who isn’t happy about the title match. Reigns isn’t pleased as Jimmy is back and the Usos are relegated to the opening match. He doesn’t want Jey to go back to being “which one is he”. Jey seems to like this line of thinking.

Here is Rick Boogs to play play Shinsuke Nakamura to the ring again and McAfee is REALLY happy.

Otis is here with Gable and jumps Nakamura to start, only to have Nakamura kick Gable down. Cue King Corbin to take his crown back as Nakamura can’t hit Kinshasa. Instead it’s a rollup for two and then Kinshasa can connect for the pin at 1:57.

Post match Corbin leaves with the crown but Boogs guitars him in the back and Nakamura gets the crown again.

Kevin Owens can barely talk but manages to tell Adam Pearce that he wants his title shot against Apollo Crews next week. The match is on, with Commander Azeez banned from ringside.

Rey Mysterio is praying before the match.

Ziggler and Roode are challenging and insist that they had nothing to do with Rey being attacked (which makes sense as they were in the ring when we came back from a break). That should mean a forfeit, but Dominik says he’s going to step up like his dad did at Backlash. Ziggler: “THIS IS CHILD ABUSE!” So Dominik goes it alone and is taken down in a hurry to start.

Roode takes him into the corner to hammer away and Ziggler kicks Dominik down as well. A neckbreaker gives Ziggler two but Dominik manages to dropkick him to the floor. The slingshot dive drops both challengers but Roode breaks up the 619. With Roode knocked down, the 619 misses and Ziggler hits a Fameasser for two. A powerbomb/neckbreaker combination gets two but here is Rey, with the distraction allowing Dominik to roll Roode up for the pin at 6:59.

Post match here are the Usos for the staredown. Roman Reigns is not happy in the back to end the show. 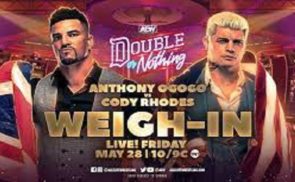