Last week saw a big change of pace as two more names were added to the Fastlane World Title match. Maybe this week we can just add more people until there’s nothing left to do but have one match take up most of the pay per view. I mean, they did the same thing on Raw last night. Let’s get to it.

Renee Young brings out AJ Styles to start things off. Hang on though as AJ has to strike a quick pose for the AJ STYLES chants. AJ explains the idea of a fatal five way and says he could lose the title to someone when he’s not even being pinned. One on one he can beat any of them but here’s Baron Corbin to disagree. Baron has beaten him twice in a row because he has AJ’s number. The difference is Corbin is a fighter instead of an athlete and he can pin anyone to win the title.

This brings out Kevin Owens, who says he can beat anyone at any time. AJ says Owens must have had a boil lanced off his back, meaning Sami. Owens blames all of this on Shane McMahon, who is next to interrupt. Shane makes Corbin vs. Styles and Owens vs. Ziggler for tonight. Actually let’s just do one of those matches right now.

Owens forearms him down to start but eats a dropkick to send him outside. Kevin turns it into a brawl though and sends Ziggler into the barricade. That just means another dropkick off the apron but Owens drops him again. The backsplash misses though and Ziggler scores with a suplex. Owens whips him into the corner though and the Cannonball gets two as we go to a break.

Back with Ziggler hitting a DDT but getting thrown into the corner again. A Vader Bomb elbow gives Kevin two but Ziggler is right back with the Fameasser for two of his own. Ziggler slips out of the Pop Up Powerbomb and the Zig Zag gets another near fall. Cue Sami for a distraction though, allowing Owens to hit a superkick to the back of the head for the pin at 11:19.

Result: Kevin Owens b. Dolph Ziggler – Superkick to the back of the head (11:19)

Here’s Jinder Mahal to talk about Bobby Roode having a secret. Since Mahal is a man of honesty, he has Roode’s Smackdown Top Ten voting list. Roode of course is at #1 but Orton is nowhere to be seen. That makes Roode a glorious egomaniac and a glorious LIAR. Cue Roode to say that wasn’t his list but the truth is Mahal can’t make a top ten list. Roode knows Jinder wants to be US Champion so forget Randy Orton. This of course brings out Orton, who helps send Jinder outside before taking the Glorious DDT. Mahal comes back in with a Khallas to Roode.

Shane and Bryan are in the back with Shane talking down to Bryan again about the same issues with his decision making. As a result, Shane makes Roode vs. Orton (presumably for the title but not specified) at Fastlane.

Charlotte slides around Logan to start and quickly brings in Becky for the rapid fire legdrops. Everything breaks down and the Squad is sent outside as we take a break. Back with Becky holding Riott in an armbar as everything breaks down. Naomi hits a slingshot dive onto Logan and Riott but Morgan sends her into the steps to take over.

Logan comes back in with an Anaconda Vice until Naomi sends her into the corner, allowing the hot tag off to Charlotte. The strut into the neckbreaker rocks Logan but Morgan’s distraction prevents the Figure Eight. Logan chop blocks the knee but Charlotte gets over for the tag to Becky anyway. Everything breaks down and Riott has to be saved from the Disarm-Her. Instead it’s the Riott Kick to pin Becky at 13:13.

Sami comes in to see Owens and says he owes him. Until he joined Owens, he was frustrated all the time and nothing was working. Now he’s where he belongs though and it’s time to be Kevin’s guardian angel. That’s why at Fastlane, Sami will lay down for him so Kevin can become champion. Owens doesn’t know what to say and doesn’t look completely convinced.

Winners get the title shot at Fastlane. Woods is sent into a kick from Shelton to start and a hard slam puts him down again. Back from an early break with Woods hitting a missile dropkick and making the hot tag to Big E. House is cleaned but Gable muscles him over with a belly to belly. Big E. gets caught on the top rope so Kofi gets on the apron for some reason, allowing Shelton and Chad to hit the powerbomb/middle rope clothesline combination. Woods makes a last second save and it’s a Shining Wizard to end Shelton at 6:47.

Post match the Bludgeon Brothers come out and scare New Day to death.

They’re tossed to the floor, Rowan hits a double splash, a sitout powerbomb crushes Jobber #1 and the double spinebuster ends Jobber #2 at 1:29.

Ruby Riott will face Naomi next week but wants Charlotte and the title at Fastlane.

Corbin, with words on the screen, promises to win the title at Fastlane.

Charlotte vs. Riott for the title is confirmed for Fastlane.

Non-title. AJ knocks Corbin outside to start and tries a slingshot dive, only to get caught in a chokebreaker. We take an early break and come back with Corbin hitting a hard clothesline but missing a charge into the post. AJ is thrown outside and having to dive over the announcers’ table to beat the count.

A short range Phenomenal Forearm gets two but one heck of a Deep Six gets the same. End of Days is broken up and AJ gets the Calf Crusher for the near submission to send Corbin bailing to the ropes. A faceplant drops AJ again but he pops takes them both out to end the show. 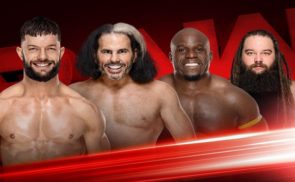 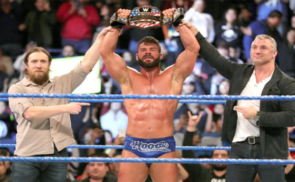