Who was that again? As is the case in almost any other job, wrestlers often move from one employer to another. In this case, wrestlers jump from promotion to promotion, which can make for some interesting moves. Some of these are a lot more interesting than others, but it can be fascinating to see where someone winds up. It can be an even bigger deal to hear them referenced again, and that was the case this week.

This week’s edition of WWE SmackDown featured a confrontation between Seth Rollins and the Bloodline. During the segment, Rollins and Roman Reigns argued back and forth, with Rollins referencing the pair’s time in the Shield. Rollins said that the Usos were holding Reigns up, “just like Mox and I held you up during the Shield.” This was a rare reference to Dean Ambrose under his AEW name of Jon Moxley. In a related note, Moxley returned to the ring for the first time since October this week on AEW Rampage.

Opinion: That is one of those situations that doesn’t mean very much but it certainly gets some heads to snap around. Hearing not just the former Ambrose’s name but also the AEW version of the name is that big of a change. While I can’t imagine Moxley ever showing up in WWE again, there is something odd about hearing his name there again. If nothing else, it is quite the sight to see a former WWE star named, as it doesn’t happen very often.

What did you think of the mention? Will Moxley ever return to WWE? Let us know in the comments below.

WWE’s Recent Comments May Have Gained Them A Strong Enemy 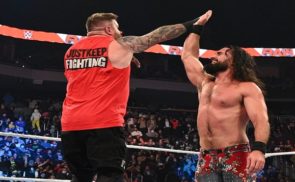 I Know You: Half A Dozen Guest Stars Appear On WWE SmackDown