It’s the first Raw of the new year and we’re starting big with Raw Roulette. The show will basically be a bunch of Spin The Wheel Make The Deal matches and that should make for some interesting options. I say should because it probably won’t, but at least they’re doing something. Oh and there will be a lot about Ric Flair, because we need to do that as often as possible. Let’s get to it.

We open with a recap of last week’s main event with William Regal costing HHH a spot in the Royal Rumble, but Ric Flair’s career was saved again.

William Regal is in Vince McMahon’s office and tells him that the fans are expecting something big from Raw Roulette on the first Raw of the year. Vince goes over some of the options and you can hear the salesman in him, which is where he tends to shine. As for HHH, Vince wants to see him injured so Regal can face him tonight. We spin the wheel and it’s…..First Blood. Regal seems to approve and leaves, only to get jumped by an angry HHH.

We’re joined in progress with Kennedy dropping Haas for two but Shawn tags himself in and throws Kennedy outside. Then Haas goes to the floor as well, puts on a superhero mask, declares IT’S TIME, and gets slingshotted back inside. Murdoch gets in a cheap shot from the apron though and a clothesline gives him two.

Haas comes back in but gets dropped, only to have Kennedy bail to the floor to avoid a tag. Shawn doesn’t seem to mind and rips Haas’ mask off before starting the comeback. Sweet Chin Music knocks Murdoch off the apron but Kennedy tags himself in, just before Shawn superkicks Haas as well. The Mic Check drops Shawn and Kennedy pins Haas.

Rating: C. Haas and Murdoch were little more than props here and that isn’t the worst idea. What mattered here was keeping Michaels vs. Kennedy going and it wouldn’t surprise me to see them have their big blowoff at the Rumble. The wrestling wasn’t the point here and in this case that’s ok.

Trading Places match, meaning they’re dressed as each other, but we don’t even get to see the spin of the wheel, which is the best part of the show. Santino Marella and Cody Rhodes are here too, but hang on as Holly has trouble with his big afro. It doesn’t stay on long but Carlito uses the distraction to stomp away and take over. Carlito hits a chop in the corner but Holly shows him how it’s really done to start the comeback. There’s the dropkick so Santino offers a distraction. Since it’s Santino, that doesn’t exactly go well as Holly intercepts the apple and spits it in Carlito’s face. The Alabama Slam finishes for Holly.

Rating: C-. This was mainly there for the visual gag of Holly in a wig so there was no need to have the match get any kind of time. There isn’t much to the tag division at the moment but would Carlito/Marella be huge underdogs against Holly and Rhodes? Carlito in a blond wig was a bit confusing as he did look like Holly, so they got half of the visual quite right.

Maria spins the wheel for her match and it lands on submission match, but Vince McMahon changes it to a lingerie pillow fight. For some reason, Vince feels the need to explain the concept. This results in Maria making a joke about having natural pillows.

Vince McMahon has Hornswoggle spin the wheel and gives him a talk about….I have no idea as the audio is all screwed up, with JR apologizing for the issues.

Post break we see a repaired version of the video, which saw Vince put Hornswoggle in the Royal Rumble, but first he has to qualify. It’s a Mr. McMahon’s Choice match, so we’ll have a tag match with Hornswoggle getting to pick his partner, with the winning team qualifying. Finlay isn’t here, but Hornswoggle seems confident.

Maria vs. Jillian Hall vs. Mickie James vs. Melina

Lingerie pillow fight, meaning there is a bed with a bunch of pillows on it provided. Lawler: “Why do all of these Divas have all of this great looking lingerie with them every week?” Hold on though as we have a surprise bonus.

Maria vs. Jillian Hall vs. Mickie James vs. Melina vs. Ashley

Jillian and Melina try to hide under the bedspread and get beaten up with the pillows. Maria gives Jillian a Bronco Buster and Mickie tries to powerbomb Melina onto the bed. We get some “vicious” pillow attacks and Jillian is tossed into Melina. Ashley drops an elbow for the pin.

Rating: D-. It’s a good example of a match where the concept is obvious but it’s just so dumb that the charm was lost. Everyone is just oh so happy to be out there with their friends and it comes off as so stupid. There is enough talent in there to get over without this stuff and it’s annoying to have to see.

Super Crazy turns down Hornswoggle’s offer to team up but Hornswoggle sees someone else off camera who gets his attention.

First blood. HHH wastes no time in taking the brawl to the floor but misses a toss with the steps. Regal posts him head first and they head back inside where a turnbuckle pad is taken off. Right hands and a knee drop stay on the face but HHH is back with a facebuster. A kick to the head drops HHH again and the fans are all over Regal. The brass knuckles shot is broken up with a spinebuster, allowing HHH to unload with right hands to bust Regal open for the win.

Rating: C. This was short and to the point but mainly just made me want to see these two have a regular match. You can’t do much in a five minute First Blood match but HHH pounding on Regal’s face until it was busted open was quite the visual. Regal is a good lackey who can fight and he wasn’t squashed here, but a First Blood match needs more time than this.

Santino Marella turns Hornswoggle down too because he doesn’t want Vince mad at him and small people freak him out. Hornswoggle is dejected.

We recap JBL vs. Chris Jericho, which stems from Jericho being annoyed at getting bumped into. Then they yelled at and punched each other a lot.

Chris Jericho comes to the ring and finds out that he is in a handicap match.

Snitsky hammers away in the corner to start but gets caught with the running forearm. Some stomping has Jericho in more trouble but he’s back up with the triangle dropkick to the floor. The brawl with JBL is on outside, at least until JBL hits him with the bell for the fast DQ.

Post match the beatdown continues, with JBL pounding away and choking with a microphone cable. JBL even drags him up the aisle by the cord to make things extra violent.

Jordan is a rather skinny guy but hang on as someone comes out to take his place.

Foley hammers away at Robbie to start and it’s off to Hornswoggle for a running kick to the face. Rory comes in for a faceplant but a slide through the legs allows the tag off to Foley. The Highlanders actually take him into the corner to start up the double teaming. Foley fights him off like he’s Mick Foley beating up the Highlanders, including the Mandible Sock to Rory and a double arm DDT to Robbie. Hornswoggle comes in with the tadpole splash for the pin.

Rating: C-. Nothing wrong with Foley coming in to save Hornswoggle from a low level team. Foley in the Rumble in the Garden will be nice and Hornswoggle has been featured far too much lately to not be around in some way. They kept it quick here and the fans were into Foley so it went well enough. That being said, egads the Highlanders fell fast, despite not even being that high up in the first place.

The cage is lowered, as the stipulation was already set.

Non-title in a cage and Randy Orton is watching from ringside. Umaga runs him over to start but misses a sitdown splash. A jawbreaker staggers Umaga and he misses a charge into the cage in the corner. Back up and Umaga launches him into the cage but Hardy hangs on in an impressive counter. It’s too early to go over the top though as Umaga pulls him back down for a crash as we take a break.

We come back with Umaga working on a nerve hold for a good while. A backdrop into the cage rocks Hardy again and Umaga splashes him up against the cage for a bonus. Hardy manages a few right hands so Orton throws in a bunch of chairs to give Umaga weaponry. A chair to the back has Hardy in trouble but he’s fine enough to crotch a climbing Umaga on top. Springboard Poetry In Motion drives Umaga into the corner but the Twist of Fate is easily blocked.

The running hip attack misses though and Hardy LAUNCHES a chair at Umaga’s head to stagger him again. A DDT onto a chair gives Hardy two but Orton slams the door on his head to cut off the escape. The Samoan Spike is blocked though and now the Twist of Fate connects. Hardy goes up, sees Orton waiting on him below, and dives off the cage with a Whisper In The Wind to knock Umaga silly for the pin.

Rating: B. That’s almost all for the finish as otherwise it was a run of the mill cage match with some good spots. What mattered here was Hardy coming off like a superhero with that Whisper in the Wind and Orton looking scared of what is waiting on him at the Rumble. I remember watching this live and being completely sold on Hardy beating Orton. It had me needing to see the title match because I knew Hardy could win. That’s a nice feeling to have and it worked to perfection here.

Overall Rating: C. The main event is more than enough to carry the show, but the Raw Roulette stuff was only so good. They didn’t even show some of the spins and the matches didn’t exactly blow anyone away. What matters here is Hardy, as Orton is starting to realize he could be in trouble and that feels different for him. I liked parts of the show, but the Rumble itself needs some more build. More on that next week, but for now, it’s all about Hardy and that’s really cool to see.

Substitutions: Motor City Machine Guns Set For All Out As Replacements 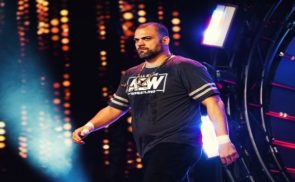 Put It On Hold: AEW Star Suspended, All Out Match In Doubt