He might be in? Retirement is a weird subject in wrestling as a lot of stars have problems finding a way out of the ring. So many wrestlers seem to want to be in the ring one last time for one more match and that can go on for years. It is rare to see someone get out of the ring for good and now another former champion seems interested in getting back in the ring under the right circumstances.

In a new interview with BT Sports, former WWE Intercontinental Champion and current NXT broadcaster Wade Barrett said he could see himself getting back in the ring again. Barrett said you never really retire as a wrestler and while he “doesn’t have some strange itch” if the right opportunity presented itself at the right time, he might wrestle again. Barrett, 42 years old, last wrestled on the April 4, 2016 Monday Night Raw.

He had a lot to say. Check out a clip from the interview:

"If the right opportunity presents itself at my door, we might see a Wade Barrett return

I love my gig in NXT, it's the happiest I've ever been, I don't have an itch I'm trying to scratch, BUT with that being said…"

Opinion: This is the kind of thing that you hear a lot of wrestlers say and it wouldn’t shock me to see Barrett wrestle one more time. He hasn’t wrestled in a long time and if he is still healthy and able to go, why not see what he can still do? Barrett is a five time Intercontinental Champion and that is going to have some value if he gets in the ring and put someone over. I don’t know if it will happen, but it would be nice to see.

What do you think of Barrett? Who would you want to see him face? Let us know in the comments below. 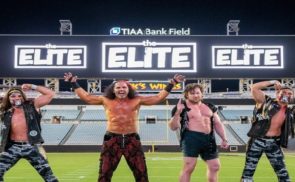