The Backstory: Why CM Punk vs. Jon Moxley Went So Strangely

There’s a reason for that. Every so often in wrestling, you see something that might not make the most sense at first. Something happens and it is so random or out of nowhere that it is almost confusing. That can make for some odd moments, but occasionally an explanation will come out that gives a bit more context. We now have that for one of the odder situations in recent memory.

The featured match from this week’s edition of AEW Dynamite saw Jon Moxley defeat CM Punk to unify the World and Interim World Titles. The match lasted about three minutes and was announced only one week in advance. According to the Wrestling Observer Newsletter, the plan is to hold a rematch between the two at All Out on September 4. The match was held with such short notice for multiple reasons, including a desire to boost ratings, Moxley not liking being called Interim World Champion and an attempt to tell a different kind of story over the title. The rematch has not been officially announced.

Opinion: This does make some sense, but I can’t get my head around the idea of having a title match last three minutes and then a rematch less than two weeks later. If Moxley wins, absolutely nothing has changed, but if Punk wins, there was no point to having the interim title in the first place. Maybe the rematch can be better, though it is certainly a weird way to get there.

What did you think of the match? How would you see a rematch going? Let us know in the comments below. 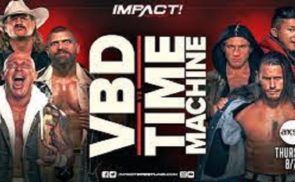 It’s On: Long Awaited Title Match Set For AEW All Out