Bound For Glory is starting to take shape and we now have a main event set for the show. Eddie Edwards won an elimination match last week to earn the spot and now we can begin the build towards the biggest night of the year. There is a lot more to get set up for the show though and maybe we can work on that this week. Let’s get to it.

We open with a recap of Eddie Edwards winning the elimination match last week to earn the title shot.

VXT is defending. Grace and Green start things off with the former grabbing a headlock takeover. With that not working, Purrazzo comes in for a few shots before it’s right back to Green. Grace runs her over again and hands it off to Yim for a dropkick into the corner. The Cannonball gets two but Purrazzo’s cheap shot lets the champs take over for a change. Some clotheslines get two on Yim, followed by a clothesline for two on Yim. Purrazzo misses a charge into the post though and the tag brings in Grace.

Everything breaks down and Yim suplexes Green for two before missile dropkicking Purrazzo. Green is back up with a top rope Blockbuster on Yim, only to get gutwrench powerbombed by Grace. The champs are sent outside for stereo dives but Grace cuts Yim off. The distracted referee misses a neck snap across the top rope to Grace, setting up the Due Collector (that double suplex) to retain the titles at 7:28.

Violent By Design says they’re back and ready for Time Machine.

Vincent comes up to Josh Alexander, who he is facing tonight. Alexander isn’t dealing with the mind games and plans to drop him on his head.

If Anderson wins, Maria, here too, is banned from ringside whenever Bennett and Matt Taven get their Tag Team Title shot. Anderson chops him down to start and stomps away before a clothesline puts Bennett on the floor. We take a break and come back with Bennett working on a chinlock before whipping Anderson hard into the corner.

The big running start sets up the poke to the eye and we’re back to the chinlock. Anderson fights up and hits the Rocket kick, only to get superkicked for two. Maria offers a distraction so Taven can come in with a cheap shot, only to be cut off by Doc Gallows. That’s enough for the Gun Stun to finish Bennett at 10:16.

Post match the Good Brothers go to the back where Scott D’Amore makes the Tag Team Title match for next week.

Savannah Evans is banged up after Killer Kelly beat her last week. Tasha Steelz is ready for revenge but Kelly chokes her from behind.

Brian Myers is on commentary. Gujjar runs him over to start and hits a shoulder in the corner for two. Hotch is back with a rake to the eyes and a kick to the head in the corner, only to roll into a spinebuster. The Gargoyle spear finishes for Gujjar at 2:18.

Post match Myers lays out Gujjar but he comes back with a Gargoyle spear. Gujjar steals the Digital Media Title.

VXT brags about their win to Gail Kim and Deonna Purrazzo thinks she should get a Knockouts Title shot. Gail gives her a #1 contenders match with Masha Slamovich instead.

Gujjar won’t give the title back, saying Myers can come get it.

Non-title. Vincent drives him into the corner to start but gets belly to belly suplexed for his efforts. A Russian legsweep drops Alexander though and Redrum connects for a fast two. The running knee misses Alexander in the corner and he’s right back with a German suplex to send Vincent flying again. It’s too early for the C4 Spike so Alexander grabs the ankle lock instead, sending Vincent straight to the ropes. Alexander is right back with a Falcon Arrow into a C4 Spike for the pin at 4:05.

Post match here is Eddie Edwards to say he is going to be challenging Alexander at Bound For Glory, but they don’t have to be enemies. There is a war going on in wrestling and it has nothing to do with what is going on in the ring. These people in the arena support the machine instead of the wrestlers and Alexander needs to pick a side. Before Edwards can get very far, Heath runs in with the Wake Up Call.

Raj Singh and Shera are complaining about things when they hear Moose and Steve Maclin arguing. Sami Callihan jumps Maclin and Moore, with Maclin being busted open. The villains manages to tie Callihan up in barbed wire and leave him laying.

Rosemary is here with Jessika, who is billed from the Bright Light District. Rosemary gives Jessika some eye black to fire her up and Alisha gets crushed early. A running basement crossbody drops Alisha again and a fire thunder driver finishes her off at 1:56.

Video on Mickie James walking out of Impact.

Time Machine vs. Violent By Design

That would be the Motor City Machine Guns/Kushida vs. Eric Young/Joe Doering/Deaner. Kushida charges at Doering to start but the shoulders bounce off of him. Young comes in so Shelley joins in to double team him down. It’s off to Deaner, who gets kneed in the back as everything breaks down. Deaner gets in a cheap shot on Sabin in the corner though and it’s Doering plants him to send us to a break.

Back with Young’s neckbreaker getting two, setting up Doering’s elbow drop for two. The alternating stomps and choking in the corner ensues but Sabin avoids a charge. That’s enough for the tag off to Kushida so the pace can pick way up. A basement dropkick hits Deaner and it’s right back to Shelley for some kicks to the face. Everything breaks down again and the villains are sent outside, with Sabin hitting a dive onto Doering.

Back in and Deaner rolls through Sabin’s high crossbody for two, setting up Young’s Death Valley Driver for the same. Deaner hits a top rope headbutt to set up Young’s top rope elbow for two but Young can’t hit the piledriver. Sabin gets over to the corner and everything breaks down again, with the villains being kicked out to the floor. Deaner gets kicked in the head by Kushida, sending him into Cradle Shock to give Sabin the pin at 18:42.

Next Up? Surprising NXT Name Discussed For Main Roster Call Up 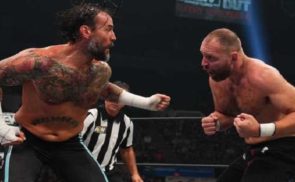 The Backstory: Why CM Punk vs. Jon Moxley Went So Strangely