It’s time to get ready for a title match as the main event this time around is a five woman gauntlet match for a future shot at Kay Lee Ray. This is almost a necessary move as Ray has been champion for the better part of forever now, meaning she is going to need a fresh challenger. On top of that, the Heritage Cup rules are back as Nathan Frazer faces Noam Dar. Let’s get to it.

Xia Brookside is out of the gauntlet match so we have an empty fifth spot.

Heritage Cup rules. Round one begins as Frazer takes him down into a hammerlock and then switches into a wristlock. That’s reversed into the same thing from Dar, who has to avoid a charge against the ropes. They go to the mat with Dar grabbing a headscissors into a standoff as the round ends, with Dar getting in a cheap shot elbow after the bell. Round two begins with Dar going straight to the leg but Frazer is back up with a forearm to the face. A small package finishes Dar at 59 seconds of the second round (4:37 total).

Round three begins with Frazer hitting a dropkick into a running shooting star press for two. Cue Sha Samuels to watch at ringside and the distraction lets Dar get in a shot to the leg to take over. A kick to the arm puts Frazer down but one to the chest is cut off. Frazer goes up top and headbutts him down but time runs out before he can do anything.

Round four begins with Frazer hitting a running dropkick into the corner but Dar avoids a top rope double stomp. Dar strikes him down for two but the Nova Roller is countered into a rollup for two. An enziguri hits Frazer but he gets pulled into an ankle lock to tie it up at 1:14 of the round (10:03 overall). They slug it out to start round five with Frazer grabbing a quick rollup for two. A swinging suplex gets the same and Frazer goes up but Samuels grabs his leg. With that broken up, Frazer misses a springboard and the Nova Roller finishes Frazer at 1:50 of the round (12:27 overall).

Rampage Brown throws away Gallus’ ball and still wants to fight Joe Coffey. He seems to settle for a match with Mark Coffey though.

Trent Seven is giving Jack Starz some advice when Sam Gradwell comes up. Gradwell says Seven is overrated and he sees right through this dad act. The brawl is almost on but it’s broken up in a hurry.

The rest of Subculture is here with Andrews. Muir’s wristlock doesn’t last long as Andres rolls him u for two. Back up and Muir snaps off a powerslam before hammering away in the corner. They slug it out with Muir getting the better of things and snaps off a slingshot suplex. Andrews kicks him into the ropes for a 619 to the back but has to counter another slingshot suplex into a Stundog Millionaire. Muir is knocked outside so Andrews is right there with the suicide dive. Back in and Fall To Pieces finishes Muir at 4:34.

Amale comes up to Sid Scala but can’t get Xia Brookside’s spot in the gauntlet match. Instead, she’ll be facing….to be announced, whenever Brookside is back to health.

Video on Kenny Williams beating Amir Jordan last week to get rid of him.

We get a sitdown interview between Heritage Cup Champion A-Kid and #1 contender Tyler Bate. A-Kid wants the big win to prove himself over one of the big names. Bate says A-Kid may be the master of the Heritage Cup rules but he isn’t the master of him. They don’t seem intimidated but do shake hands.

Five women, with only four known, and the winner gets a title shot against Kay Lee Ray. Isla Dawn is in at #1 and Emilia McKenzie is in at #2. McKenzie takes her down with the waistlock to start and then forearms away. A swinging neckbreaker gives McKenzie two but Dawn kicks her down and gets two off a suplex. McKenzie is right back with an enziguri and running dropkick, followed by a spear for two of her own. Dawn kicks her in the head though and a bridging half nelson suplex gets rid of McKenzie at 3:31.

Dani Luna is in at #3 and kicks Dawn in the face, setting up some rolling suplexes for two. A fall away slam sets up an exploder suplex for two more but Luna misses a charge into the post, allowing Dawn to roll her up at 5:33. Meiko Satomura is in at #4 and is taking Xia Brookside’s spot. Dawn is smart enough to dropkick her on the way in and takes it outside to send Satomura into the barricade.

Back in and Dawn kicks her into the ropes, with commentary being all stunned. Some Saito suplexes into some double knees get two on Satomura but a knee drop misses. Satomura kicks her in the back but gets rolled up for two. Dawn tries another rollup, only to have Satomura reverse into one of her own for the pin at 9:43.

Jinny is in at #5 to give us the final fight and Satomura gets taken down by the arm. A front facelock gives Jinny two and a rollup is good for the same. Satomura kicks her way out of an armbar and then spins out of a headscissors. Back up and Satomura wins a strike off, capped off by a running dropkick. The Crossface is broken up in a hurry and Jinny hammers away with right hands. Satomura has had it with this and hits the Death Valley Driver, setting up the Scorpion kick for the pin at 16:35.

Kay Lee Ray comes out to trade bows with Satomura….and then superkicks her to end the show. 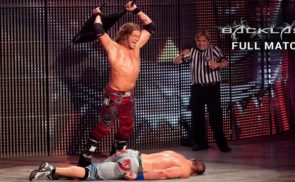 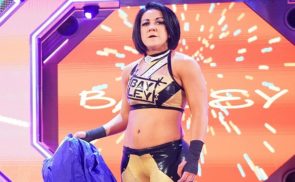