It’s the one year anniversary and that is something that could work very well. WWE knows how to hype up its own history like few others and they could manage to make it work around here. I’m not sure how many highlights there are for this show, but there is at least some potential. Let’s get to it.

Pretty Deadly is defending inside a cage, where thankfully there are no tags. The champs try for stereo escapes to start and are quickly pulled down into some suplexes. Wilson is sent into the cage and Prince gets kneed in the face a lot. The Creeds have to cut them off again, but this time Prince hits a middle rope Codebreaker to drop Julius. Brutus is fine enough to powerbomb Wilson into the cage. Prince and Brutus slug it out on top of the cage until Julius pulls Wilson down with a springboard Spanish Fly.

We take a break and come back with the champs double superplexing Julius. The champs go up but Julius pulls them back, leaving Brutus to hit the Creed Bomb for something like a Doomsday device. Cue Damon Kemp with handcuffs so Julius goes up to cut him off. That leaves Julius handcuffed to the top of the cage so Brutus has to make his own save. Brutus can’t keep up with the numbers though and Spilled Milk gets two. A series of rams into the cage crush Brutus again and another Spilled Milk retains the titles at 14:58.

Wes Lee wins the vote for a North American Title shot and is very pleased. Von Wagner, one of the losers, isn’t and storms off. Joe Gacy says he approves of the vote and wishes Lee luck. Lee seems a bit disturbed.

Video on the last year of NXT.

Legend starts fast and knocks Henley outside hard. A ram into the apron has Fallon’s back in trouble and they go back inside for an over the shoulder backbreaker. With that broken up, Henley ducks the pump kick and hits a running knee to finish Legend at 2:17.

Yulisa Leon has torn something in her knee and will be out nine months. Sanga consoles her as an annoyed Von Wagner and Mr. Stone come in. They rant a lot and Sanga says watch the language because there are ladies present. A fight is teased.

Fallon Henley, Brooks Jensen and Josh Briggs run into Toxic Attraction. After Jensen stumbles over being nice to Mandy Rose, Henley doesn’t think much of what she says back to him. Another fight is teased, with Toxic Attraction mocking Henley a good bit.

Here is Toxic Attraction to say it is appropriate that they are the featured attraction on the anniversary show. They promise to keep dominating and brag about all of their title wins, with Mandy Rose saying she’s better than Bron Breakker and Carmelo Hayes. Cue Alba Fyre to say Mandy knows nothing about her. The bat holds the team off and Mandy has to be saved. She goes back to get the title as the next challenger seems to be set.

Cora Jade talks about how great she is, despite taking her time to rise up. The lack of confidence cost her, until the match with Natalya brought her to the next level. Then she dropped Roxanne Perez like she should have done a long time ago and now the sky is the limit. The change of attitude has allowed her to become a star and this time next year, she’ll be the top star.

Wendy Choo doesn’t think much of Jade and says she may dress weird, but she’s still smart. Lash Legend comes in and is still mad about the loss to Fallon Henley. Glaring at Choo ensues.

Elliott gyrates a lot and Gallagher is shaken. A flip from Elliott makes it even worse so Gallagher hits him, only to get mauled in return. Elliott hits a Banzai Drop to finish at 1:21.

Cameron Grimes is ready to fight the D’Angelo Family himself, because he’s teaming with the one person he can trust. Time to go to the moon.

Carmelo Hayes and Trick Williams jump Wes Lee in the locker room and crush his head in a locker.

Stacks starts for the team and gets dropped with a running shoulder. A knee to the ribs does the same and there’s a running kick to the back of the head. D’Angelo comes in and the numbers game puts Grimes in trouble in the corner. Cue Joe Gacy and the Dyad, with Gacy getting on the apron as Grimes’ partner.

Grimes fights out of the corner and Gacy extends his hand, but Grimes would rather get suplexed by D’Angelo for two instead (probably smart). A backflip gets Grimes out of a suplex and he staggers into the corner, where Gacy tags himself in. House is cleaned but Grimes stops to yell at Gacy, only to have the Family break it up. A Cave In hits D’Angelo and the handspring lariat finishes Stacks at 5:36.

Post match Gacy hugs a confused Grimes, who says he doesn’t need Gacy. The Dyad jumps Grimes and Gacy joins in with the beatdown, including putting the smiley face sticker on Grimes’ chest.

JD McDonagh is getting his beard shaved and says this is a necessity. He doesn’t like Bron Breakker or Tyler bate for that matter, but doesn’t seem phased by the fact that he is bleeding from the shave.

We get a sitdown interview with Bron Breakker, who was scared after his first match but the people made him feel at home. After some issues getting there, Breakker won the NXT Title, which was a big deal for his family. Then he got to induct the Steiner Brothers into the Hall of Fame, which was a great honor for him. Breakker won the NXT Title for the second time and then beat a bunch of people to retain it. We’ll see what’s next.

Tyler Bate respects Bron Breakker but wants a rematch for the NXT Title. As for JD McDonagh, Bate is down to face him to get the title shot.

Stark pulls James into the corner to start and it’s off to Lyons, who blocks a hiptoss attempt and hits a release fisherman’s suplex into a nip up. We take a break and come back with Lyons fighting back again, including a spinning kick to Grace for two. Stark comes in to take Grace down and James gets tagged in, much to her own fear.

James manages to get in a cheap shot on Lyons and takes Stark down in a bit of a surprise. A backdrop kicks Stark out of trouble so Grace comes in, only to get kneed in the face. Since there is no Lyons, Grace kicks Stark in the face for two instead. Stark manages the Z360 (the flipping knee) to Grace and it’s Lyons with the splits splash for the pin at 9:04.

Edris Enofe and Malik Blade are happy with not voting for Joe Gacy. Cue the Dyad for the brawl but security breaks it up. Hank Walker is told to go back inside because he has his own match.

Grayson Waller is sure that he is going to be voted the biggest star of NXT, but the final four were Toxic Attraction, Nikkita Lyons, Carmelo Hayes and….Bron Breakker. Waller goes off on the fans for not voting for him because he is the face of this brand.

Walker is a security guard, doesn’t have music, and comes to the ring in street clothes. Bernal gets caught in the corner and is tossed right back out of it, only to dropkick the knee out. Some kicks to the knee stagger Walker but he tossed Bernal around again. Walker takes him down and hammers away before taking off the shirt to quite the reaction. A running elbow finishes Bernal at 3:20, which is viewed as a major upset.

Some alumni congratulate NXT 2.0 on its anniversary.

Bron Breakker is voted Superstar Of The Year.

Hayes, with Trick Williams, is defending, at least in theory as Lee was taken out earlier. Hayes talks about how he is running over everyone and he has more on him than anyone else. Hold on though as we seem to have a surprise challenger.

Hayes, with Trick Williams, is still defending and the fans are WAY into Sikoa. A whip into the corner sets up a running corner clothesline but it’s too early for the running Umaga attack. Instead Sikoa sends him over the top and onto Williams as we take an early break. Back with Williams tripping Sikoa down to bank up the bad knee and give Hayes control for a change.

The half crab keeps Sikoa in trouble until a rope breaks things up. Hayes’ jumping knee is blocked and Sikoa hammers away. There’s the Samoan drop to Hayes and Sikoa takes Williams out. A swinging Rock Bottom sets up the Superfly Splash for the pin and the title at 10:00.

Shawn Michaels gives us a voiceover talking about what NXT means to end the show, complete with a new, and much less rainbowy, logo, with the 2.0 disappearing. 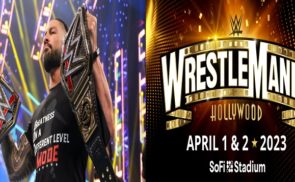 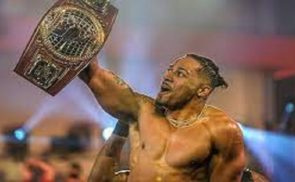