Things got a bit more intense at the end of last week’s show as Carmelo Hayes cashed in his Breakout Tournament contract to become the new North American Champion. Odds are we’ll deal with some fallout, plus we have Halloween Havoc coming up next week. That might mean some spinning the wheel and making the deal so let’s get to it.

Here are Trick Williams and Carmelo Hayes to celebrate Hayes winning the North American Title last week. They aren’t humble, so tonight is the start of the Mellowbration, which seems to please the fans. Hayes talks about how great he is and says that he is holding this title, which is now the A title, for a long time.

Cue Johnny Gargano, who says that he has been busy as of late, but now Candice LeRae is off pregnant and Austin Theory is on Raw, so now it’s time for him to get back in the ring. Gargano issues the challenge, but Trick says that Indi Hartwell has been in their DM’s all week. With that, Dexter Lumis pops up behind them and the Way clears the ring. Lumis scares Williams and Gargano is left looking at the North American Title. Gargano and Lumis share a thumbs up as Gargano holds up the title.

Chase dedicates his win to the student section. We start with an ODYSSEY chant as Jones shoves him down with ease to start. Chase realizes that isn’t going to work so he starts kicking at the legs to take Jones down. The double stomp puts Jones in trouble and there’s a short DDT for two. Jones isn’t having that and shoves Chase away, setting up a big slam and splash for the pin at 2:54.

Malcolm Bivens wants the Creed Brothers to get a chance.

The rest of the Diamond Mine is here with the Brothers. Barthel takes Brutus down to start but Brutus pops up with a belly to belly to escape. Back up and a heck of a big boot cuts Brutus down so it’s off to Julius, who gets hit in the face. Hold on though as Roderick Strong gets in a quick distraction, allowing Julius to plant Barthel and take over.

The chinlock brings Barthel back to life and it’s off to Aichner to start cleaning house. A cheap shot takes Aichner down so Barthel comes back in, only to dive into a gutwrench powerbomb for two. Cue Kushida and Ikemen Jiro to go after the Diamond Mine though, allowing Barthel to grab a rollup for the pin at 5:39.

Post match the Diamond Mine and Kushida/Ikemen Jiro go to the back, allowing MSK to come in and jump Imperium, again drawing the ire of the fans. MSK clears the ring and challenges Imperium for the Tag Team Title match next week.

Kyle O’Reilly was supposed to meet Von Wagner for a bike ride but Wagner didn’t bring a bike. Instead they go to the woods and work out with large pieces of wood/in the trees. Beers are consumed.

Joe Gacy doesn’t like violence or people who make any micro aggression. He will speak for us as a coalition and we will be stronger together. Gacy extends his hand and here is Harland to put his hand there too, with Gacy calling him little snowflake.

Here is Legado del Fantasma for a chat. The first words Santos Escobar ever heard in this business were “may God always bless you with luck”, which was always the case, at least until last week. Carmelo Hayes is a lucky son of a ***** but Escobar and Lady Luck are going to find him. Elektra Lopez is about to speak but Cora Jade and her skateboard interrupt.

The bigger Lopez powers her into the corner to start and whips Jade hard into another corner. A toss out of said corner has Jade in more trouble as this has been one sided so far. Then Jade grabs a small package for the pin at 1:47, though Lopez seemed to be out a good bit before the pin.

The winner gets to spin the wheel for next week’s Women’s Tag Team Title match. It’s a three way slap off to start until Pirotta clotheslines both of them down. Shirai isn’t having that and dropkicks Pirotta down for two as the fans are WAY behind Shirai here. Pirotta is back up to suplex both of them before throwing Jayne in a fireman’s carry. That’s broken up by Shirai’s dropkick, sending Jayne into a Samoan drop.

With Pirotta sent outside, Jayne tries a suicide dive but gets her feet caught in the ropes and faceplants on the floor for a SCARY crash. Pirotta immediately checks on her and Shirai adds a moonsault to send us to a break. Back with Jayne gone and Pirotta kicking Shirai in the face for two. A hard clothesline gets the same but Shirai tries a comeback.

That’s cut off with a Batista Bomb to give Pirotta two more but a kick to the head puts her into the ropes. There’s the 619 into a springboard (with a bit of a slip) missile dropkick to give Shirai two. We hit the Crossface on Pirotta but she powers out, only to get caught in a German suplex. The Moon Over Moonsault finishes Pirotta (ignore Shirai’s shoulders being down too) at 11:21.

Post match, we spin the wheel and it’s going to be a ladder match.

Legado del Fantasma has beaten up Trey Baxter while Cora Jade had to watch. Josh Briggs and Brooks Jensen made the save.

Tony D’Angelo knows everyone is talking about him and it’s time for him to do it again.

Ikemen Jiro and Kushida are ready to go back to the future. The lights turn blue for some reason.

D’Angelo grabs a headlock to start and, after shrugging off a kick to the face, elbows Feng down. A short arm clothesline sets up a northern lights suplex, rolled into a fisherman’s neckbreaker to give D’Angelo the pin at 1:47.

Post match D’Angelo is questioned about Lash Legend’s producer missing so he pays off the interviewer and says forgetaboutit.

We’re in Duke Hudson’s Poker Room where we can hear Hudson’s thoughts about his hand. Hudson wins, then wins again.

Joined in progress with the rest of Legado at ringside. Jensen fights back against Mendoza and hands it off to Briggs to send him flying. Elektra Lopez distracts the referee though and Santos Escobar gets in a cheap shot so Wilde can take over. Briggs gets send into the corner for some running clotheslines from both of them, setting up a double slam to plant Briggs again.

Back up and Briggs manages to toss Mendoza outside and kicks Wilde away, allowing the diving tag to bring Jensen in. Everything breaks down and a powerslam puts Wilde down for two. A backdrop makes it worse for Wilde but Jensen heads outside to deck Escobar. The distraction lets Mendoza jump Jensen from behind though, setting up the Russian legsweep/running kick to the face to give Wilde the pin at 5:17.

The mystery man is still in the graveyard, with a broken mirror, playing cards and a WWE chair. Whoever it is debuts next week.

Trick Williams and Carmelo Hayes are looking for the North American Title. They search through Ikemen Jiro’s locker (Williams: “HOW MANY JACKETS DOES THIS GUY HAVE???”) but find a drawing from Dexter Lumis. It’s an invitation to an open haunted house next week, though Williams is a bit scared. Hayes wants his title back.

The winner is the Halloween Havoc host. Waller rolls him up for two to start but Knight cuts off a jump in the corner. The chinlock goes on but the fans get behind Waller again. Waller tries to fight up and hits the jumping Stunner, only to have Knight hit him in the face. Blunt Force Trauma makes Knight the host at 2:45.

Drake headlocks Breakker to start but gets taken down with a shoulder. Breakker tells Drake to try his own running shoulder, which does not go well for Drake. With Drake in trouble, Ciampa tags himself in, much to Breakker’s annoyance. Ciampa scores with a series of running clotheslines, including a double clothesline to put both Veterans down.

Back with the Veterans working over Ciampa’s arm and cutting off a comeback attempt in a hurry. A double shot to the face doesn’t do much good though as Ciampa chops right back. Drake Downward Spirals Ciampa into the Kofi Clutch but Ciampa slips out. That’s fine with Drake, who pulls on his beard like a real villain.

Ciampa fights up and smacks Breakker for the tag, meaning it’s time to clean house. Breakker isn’t happy with that and teases clotheslining Ciampa but takes Drake down instead. The straps come down but the Breakker Recliner is broke up by Gibson. That’s fine with Breakker, who clears Gibson out and hits the gorilla press powerslam for the pin on Drake at 10:59.

Breakker yells at Ciampa and wants him to come back in to end. Ciampa joins him in the ring for the staredown to end the show. 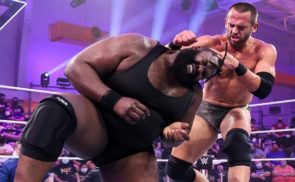 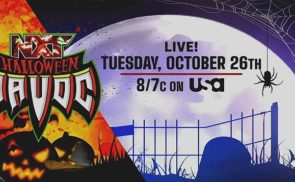