We’re done with Halloween Havoc and now the question is where do we go from here. There is no Takeover scheduled at the moment but it wouldn’t surprise me to see a Survivor Series weekend event. I’m not sure if they have the matches set up for that so far, but we do have a new North American Champion in Johnny Gargano. Let’s get to it.

We open with a narrated recap of last week’s Halloween Havoc.

Raquel Gonzalez is in Kai’s corner. Moon takes her down by the arm to start but gets reversed into a headlock on the mat. Kai armbars her down for a change, which is reversed into a headscissors as the countering continues. A flip over doesn’t work for Kai as Moon grabs a double underhook to hold her down. Back up and the arm twisting continues until Kai pulls her down by the hair. Moon nips up and does the same, meaning it’s time for a shove off.

Moon sweeps the leg and hits a running backsplash and ties her up in the corner. That’s fine with Kai, who pulls her shoulder first into the post and pulls on the arm. It’s time to stomp the arm down in the corner and the short armscissors goes on. Moon gets in a kick to the face to leave Kai’s head hanging over the apron. A running kick to the face rocks Kai again but Moon misses a suicide dive to send us to a break.

Back with Moon getting two off a spinebuster but a victory roll face plant gives Kai the same. Kai hits a good kick to the head, only to have Moon come right back with a Codebreaker out of the corner for two of her own. Moon slaps on a Crossface in the middle of the ring until Kai rolls her up for a pinfall reversal sequence.

Kai finally slaps on the Fujiwara armbar with Moon having to go to the rope for the break. They slap it out again with Moon getting the better of things and sending her hard into the corner. Gonzales gets up to break up the Eclipse though and it’s a fireman’s carry into a kick to the head to finish Moon at 16:21.

Cameron Grimes seems very shaky after last week but insists that he’s fine enough to beat Kushida. A referee comes up to say his match is next so Grimes runs off screaming ZOMBIE.

Shotzi Blackheart talks about how great last week was but now he’s ready to face a star in Toni Storm. This is a huge test for her so welcome to the Ball Pit.

Kushida wastes no time in taking him to the mat by the arm and cranks away. Back up and Grimes sends him into the corner, only to get hiptossed into a failed cross armbreaker attempt. Back up and Grimes uses his leg to crank on both arms before stomping it down for a bonus. Grimes gets up again and hits him in the face before working on Kushida’s arm for a change. You don’t do that to Kushida though as he takes Grimes down and stomps on the arm again.

The armbar doesn’t last long this time though as grimes gets up and hits a shot to the back, only to have his German suplex countered into a victory roll for two. Back up and Grimes drops him throat first onto the top rope. We take a break and come back with Kushida hitting a springboard elbow to the face into a basement dropkick. Kushida grabs both arms but the stomping is countered into a rollup for two. The jumping forearm sets up a sitout powerbomb for two more on Kushida and they’re both down.

Video on Toni Storm, who is ready to use Shotzi Blackheart as a stepping stone to the top of the division. This is the new her and she’s more Toni.

Io Shirai knows that she has to face Rhea Ripley to really be the best. She’s ready.

Killian Dain/Drake Maverick vs. Ever Rise

Dain throws Parker around to start and it’s off to Maverick, who takes Parker down without much effort. A running backsplash crushed Parker but it’s Maverick getting caught in the wrong corner. The armbar goes on but Maverick fights up and sends him outside for a breather. Martel breaks up the hot tag though as we cut to the parking lot where Pat McAfee, Oney Lorcan/Danny Burch and Pete Dunne arrive. Actually hold on as here they are in the arena for the big beatdown and a no contest at 3:52.

Result: Killian Dain/Drake Maverick vs. Ever Rise went to a no contest when Pat McAfee, Oney Lorcan, Danny Burch and Pete Dunne interfered (3:52)

Post match the beatdown is on with McAfee taking the camera to film everything as a proper heel can. Lorcan and Burch even manage the elevated DDT to Dain. McAfee carries the camera to the apron and makes everyone say cheese. Post break McAfee and company are in the ring with McAfee declaring themselves the four best men in the history of wrestling. They are not a bunch of scumbags because they are professionals.

They declare themselves the Kings of NXT and promises to destroy the Undisputed Era. Lorcan pulls out an Undisputed Era banner and we hear about how stupid all four of them were. The Era won a bunch and were over with these stupid, stupid fans. Dunne talks about Roderick Strong teaching him that you need to trust the right people.

Last week, Dunne needed to teach Strong the exact same things. McAfee talks about how big Dunne’s arms are now that he is back and brings up Strong turning on Dunne years ago.

Then the Undisputed Era became the big stars of the promotion and everything was built around them. No one was supposed to become bigger than the Undisputed Era, including Lorcan and Burch. They aren’t happy with the Era being treated than two veterans than them, but it’s time to honor the Era. They’re ready to raise the banner….but decide to put it into a trashcan instead.

They throw it in, declare the Era dead, and light it on fire. McAfee and company head to the back towards their car but Dain jumps them. The beatdown is on again with Dain being beaten down without much effort. They get in the car and leave, with McAfee reminding us that they’re the greatest and you suck.

We go to House Gargano, where Johnny Gargano now LOVES wheels. He is the first Triple Crown Champion in NXT history and now the first ever two time North American Champion. Hold on though as he gets a phone call from Ghostface, who is in his house. Actually he is next to Gargano and playing the Game of Life with him. Johnny talks about how the one big knock against him is that he can’t hold onto a title, so next week he’s defending a title against a worthy opponent. They finish the game, and of course Johnny wins, because Johnny always wins. Dancing ensues.

Shotzi charges in and shoves Storm away before avoiding a charge in the corner. A kick to the face looks to set up a springboard but Shotzi falls on her face to cut off the momentum. Shotzi takes her down by the legs and WELCOME TO THE BALL PIT connects. Storm sends her into the corner though and gets two off a running hip attack. Back up and Storm snaps off a suplex for two before kicking Shotzi down for daring to try a comeback.

The neck crank goes on before Storm switches over to a front facelock to keep Shotzi in trouble. A suplex gives Storm two and we take a break. Back with Shotzi making the comeback, including something like a reverse Sling Blade and some strikes to the face. The running reverse Cannonball hits Storm but she counters an enziguri into the rolling German suplexes.

Storm Zero is blocked though and Shotzi gets two off her own suplex. A headbutt gives Storm a close two but Shotzi catches her on top. Shotzi hits something close to a DDT to drop Storm face first onto the apron. Storm is out of it on the floor but hold on as Candice LeRae, with Shotzi’s tank, pops up on screen. The distraction lets Storm grab a rollup for the pin at 13:50.

Post match Candice says she can’t put up with Shotzi any longer….so here’s a monster truck so Candice can crush the tank. Ghostface is in the back as Candice says that makes them even for last week. Shotzi screams a lot.

Legado del Fantasma tries to jump Jake Atlas in the parking lot but he whips out a pipe to beat them down and drive away. Santos Escobar seems impressed.

It’s time for another live Thatch As Thatch Can, with a lesson on reversals. See, anyone can catch a hold but what matters is that you can reverse anything someone tries. We see how to counter a front facelock into a top wristlock, which makes the student tap quite a bit. The student doesn’t approve and glares at Thatcher, so they switch places next time. However, Thatcher takes him down into an ankle lock for a lot of tapping. Cue Austin Gray to jump Thatcher from behind and knock him to the floor a few times though.

Xia Li is embarrassed by her loss last week and it’s time to turn things around. She gets a letter, which makes her more upset. Xia asks William Regal for a match against Raquel Gonzalez over last week’s dishonor, with Regal reluctantly agreeing.

Rhea Ripley wants to face Io Shirai as well because it’s time to get her title back.

Dream’s hand/arm is still in a cast. Ciampa shoves him down into the corner to start before working on the arm. The threat of a big stomp sends Dream outside with Ciampa following, only to get sent into the barricade. Dream gets dropped ribs first onto the barricade, setting up a running knee to the face to rock him again. Ciampa isn’t done by dropping him onto the announcers’ table for a bonus, meaning now the arm can be sent into the announcers’ table.

Back in and Dream gets sent over the corner and out to the floor, where he crashes into the barricade. Ciampa isn’t about to let Dream leave so it’s back inside for a German suplex into a running knee to the face. More stomping to the arm sets up a face first drop onto the turnbuckle and we take a break. Back with Dream blocking a superplex attempt and getting two off a spinebuster. We hit the chinlock, with Dream driving the cast across the face. Dream goes up top but gets caught in a top rope superplex, triggering the canned THIS IS AWESOME chants.

Ciampa is sent outside but manages to block a dive. Dream tries again and this time takes Ciampa down in a big crash. They head inside again where Ciampa suplexes Dream right back over the top for another fall to the floor. Dream hits a superkick and grabs a chair, which the referee takes care of in a hurry. Ciampa uses the distraction to knee Dream’s top rope cast shots out of the air, setting up Willow’s Bell. The Fairy Tale Ending finishes Dream at 13:34. 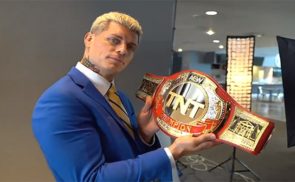