It can happen to anyone. The Coronavirus has changed the way the wrestling world works as you never know when you are going to see someone get knocked out of action for several weeks due to an outbreak or even just a single person possibly coming into contract with the virus. That does not mean you are going to be sick, but it means you might be gone for a bit. That is the case with a talented AEW star.

SCU has been one of the more consistent group of wrestlers in AEW since its inception. That should not be a surprise whatsoever as the three of them are able to have a good match with almost anyone. It is the kind of thing that can open up a variety of options throughout the roster and AEW has done a nice job of capitalizing on the idea. Now though, one of the team will not be around for a bit.

AEW has announced that Scorpio Sky has come into contact with someone who has tested positive for the Coronavirus in the last fourteen days. As a result, Sky’s scheduled match against Shawn Spears on this week’s Dynamite has been postponed. Sky has not been announced as testing positive and there is no word on either when the match will take place or how long Sky will be out.

Through contact tracing, AEW learned @ScorpioSky was exposed to someone with COVID-19 within the last 14 days. An initial test was negative, but AEW has decided to postpone tonight’s scheduled match. pic.twitter.com/5hBTxKoiDN

He’s worth waiting for. Check out what Sky can do when he is healthy:

Opinion: This is annoying but it is the kind of thing that you have to do in this situation. The virus is nothing to mess around with and the last thing you would want to do is spread it to the rest of the locker room. Sky vs. Spears is an intriguing match that has been built up for a long time now but like any other match, it is something that you can wait for. Hopefully everyone is healthy, because that’s all that matters in the end.

What do you think of Sky? How far can he go in AEW? Let us know in the comments below. 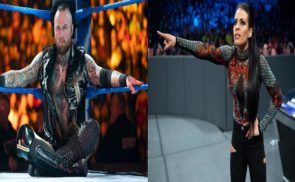 WWE Dropped Plans To Use Real Life Marriage In A Storyline