She’s up next. WWE has been expanding its slate of large scale shows in stadiums, meaning there are multiple events that need big time cards. The most common way to do this is with championship matches and there are several to pick from at any given point in WWE. Another of those was added to the lineup this week, as a new championship match was set for an upcoming major event.

This week on SmackDown, Shayna Baszler won a gauntlet match to become the new #1 contender to the SmackDown Women’s Title. The match featured seven women, with Baszler last eliminating Raquel Rodriguez. Baszler will receive her title shot against champion Liv Morgan at Clash At The Castle in Cardiff, Wales on September 3. This will be Baszler’s first televised shot at a singles title since Money In The Bank 2020.

Opinion: I have long since wondered how Baszler never won a singles title in WWE. While she had the great run as NXT Women’s Champion, nothing ever happened on the main roster for some reason. Hopefully she gets a chance to win a title at some point, as she might not be getting another chance. Baszler has all the tools and may win the title against Morgan, which certainly would be nice to see.

What do you think of Baszler? How will the title match go? Let us know in the comments below. 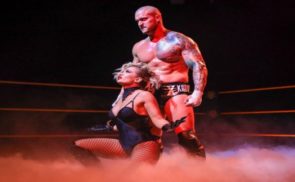