We are well on the way to Slammiversary and that means it is time to build towards the matches that are already set for the show. This includes the World Title match of Josh Alexander defending against Eric Young, which will probably be built up a bit more this week. Let’s get to it.

We open with a recap of last week’s main event, with the Briscoes retaining the Tag Team Titles over Violent By Design. This set up a post match staredown also involving Josh Alexander.

We get a respectful handshake to start until Shelley grabs a hammerlock. Miguel spins out of that in a hurry though and we’re at a standoff. A whip into the ropes doesn’t work for Shelley, as Miguel is right there with a few kicks to the arm. Shelley sends him outside though and there’s the baseball slide to stagger Miguel. The chop hits the post though and Miguel grabs a middle rope moonsault as Shelley grabs his hand.

Back in and Shelley is fine enough to knock him out of the air and start cranking Miguel’s leg around the rope. A dragon screw legwhip makes Miguel scream and the Motor City Stretch makes it even worse. That means Miguel needs a rope for the break and a dropkick has Shelley in trouble for a change. Miguel grabs his leg before firing off the kicks to the chest anyway and grabbing a dragon sleeper.

Shelley slips out so Miguel dropkicks him in the back of the head for two. A Downward Spiral into the middle buckle drops Miguel as well though and they grab hands for the slugout. Miguel gets the better of a strike off but misses the top rope Meteora. Shelley grabs a scoop brainbuster for two before Miguel counters Shell Shock into a crucifix for the pin at 12:26.

The Briscoes and Josh Alexander are ready for Violent By Design. The Good Brothers come in and want a Tag Team Title shot, which is cool with the Briscoes.

Rosemary is here with Havok. They slug it out to start with Havok sending her into the corner, only to miss a charge. Slamovich hits a heck of a spinwheel kick in the corner, followed by a hard kick to the head. Something that is supposed to be the Snow Plow (closer to a suplex slam) finishes Havok at 1:28.

Rosemary isn’t sure what to do.

Trey Miguel is fired up about his win but Kenny King comes in to say the title is coming his way at Slammiversary. Black Christian doesn’t think much of King and challenges him for the Ultimate X spot. Deal.

Rich Swann thinks Matt Cardona is ducking him so Swann is coming for him. As for Matthew Rehwoldt, if he wants to throw Swann out of Gauntlet For The Gold, come see him face to face.

Green gets her to give chase to start and then pulls her down by the hair back inside. Commentary explains the idea of the Queen Of The Mountain match, which even they admit is pretty complicated. Grace fights back up and hits a backbreaker but Green knocks her to the floor for a flip dive off the apron.

We take a break and come back with Grace being sent face first into the middle buckle for two and then gets four more for a bonus. The hard spinebuster gets Grace out of trouble and she grabs a sleeper in the corner. With that broken up, Grace hits some shots tot he face and a torture rack spun into a powerbomb gets two. The MuscleBuster is broken up so Green hits a facebuster, with Grace bridging up for the kickout. Grace’s electric chair is broken up but she’s fine enough to hit the Grace Driver for the pin at 11:26.

Honor No More complains to Scott D’Amore about the unsafe working environment that caused Maria Kanellis to get hurt. They want the Good Brothers at Slammiversary but they’re taken with the Briscoes instead. Eddie Edwards issues threats.

Deonna Purrazzo doesn’t want Mia Yim coming in and making a name off of her but Tasha Steelz and Savannah Evans come in. Steelz offers to let Purrazzo at ringside for Evans vs. Yim next week.

Kazarian runs him over with a shoulder to start and grabs a headlock on the mat. Back up and a headlock takeover puts us in about the same spot so Sabin goes after the arm as we hear about Kazarian’s history in the company. The headlock takes Sabin back down but he fights up in a hurry and tosses Kazarian outside in a big crash. Back in and a high crossbody hits King, setting up a hard clothesline for two.

The crossarm choke goes on for a bit, followed by a quick German suplex. Kazarian is right back with a shot to the face, setting up a springboard spinning legdrop. The slingshot DDT gets two more on Sabin but he’s right back with a running boot to the face. Kazarian tries to go up but gets belly to back superplexed back down. Back up and stereo crossbodies put both of them down but Honor No More runs in and decks Kazarian for the DQ at 10:25.

Result: Frankie Kazarian b. Josh Alexander via DQ when Honor No More interfered (10:25)

Post match the big beatdown is on so Honor No More poses.

Post break Honor No More rants about how Impact has no respect. Heath and Rhino come in for the yelling and likely match setup.

Singh and Gujjar start things off with Gujjar hitting a dropkick followed by a Sling Blade. It’s already off to Morrissey for a shot to the face before it’s right back to Gujjar for the slingshot elbow. Shera gets in a shot from behind though and Gujjar is in trouble for the first time. Gujjar belly to belly suplexes his way to freedom though and the hot tag brings in Morrissey to clean house. The powerbomb is broken up by Shera as everything breaks down. Morrissey chokeslams Raj and the middle rope spear gives Gujjar the pin at 5:17.

Moose is ready for his tag match next week, whether or not Sami Callihan is out to get him. He knows what Sami is doing but here is Steve Maclin, Moose’s partner next week, to tell him to be ready. The lights flicker but no one is here.

Here is what’s coming next week.

Briscoes/Josh Alexander vs. Violent By Design

Alexander and Deaner start things off with an exchange of arm control until Deaner grabs a headlock. That’s reversed into an armdrag into an armbar before Jay comes in to stomp away in the corner. Mark comes in and gets taken into the corner though, allowing Young to choke away. That earns him a backdrop and everything breaks down, with Jay hitting a big flip dive to the floor. Mark adds the Bang Bang Elbow and we take a break.

Back with Young elbowing Jay in the back but Jay gets over for the tag to Alexander without much trouble. That lets Alexander hammer away on Young in the corner but a Deaner cheap shot puts Alexander down again. Alexander’s neck gets caught in the corner for a dropkick to the back, leaving his nose busted.

A backbreaker/neckbreaker combination gets two on Alexander but he fights out of trouble without much effort. The hot tag brings in Mark to clean house and the Froggy Bow gets two on Young. Jay gets to clean house and there’s Redneck Boogey for two on Deaner. Young gets in a flag pole shot to Mark so the Deaner DDT can get two. Everything breaks down and Deaner gets in a hockey mask shot to Mark, setting up Young’s piledriver for the pin 17:09.

Result: Violent By Design b. Briscoes/Josh Alexander – Piledriver to Mark (17:09)

Move On: WWE Officially Moving Money In The Bank To New Venue 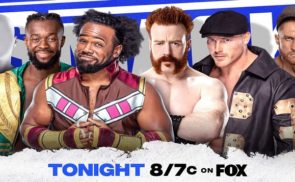