Any information would be appreciated. There are a lot of wrestlers under the WWE umbrella and while some of them are bigger names than others, each one of them has something going on, either in or out of the ring. Some of these things might not be the most positive situations in the world and you don’t know what someone is going through behind the scenes. Now we might have gotten a bit of a look behind someone’s curtain.

There are not many people in today’s WWE who have come from nothing and become something like Naomi. Starting as a glorified cheerleader, Naomi turned herself into one of the more popular stars in the women’s division. Naomi is a two time SmackDown Women’s Champion and the husband of Jimmy Uso, but she has not appeared very much as of late. So what is going on?

Naomi made a post to Twitter on Thursday, saying that she has not been as active on social media as of late due to the current situations in the world and trying to help her husband through his knee injury. She said that she is looking to figure out her next step forward in her career but she is feeling hopeful. Naomi’s most recent match was on the May 15 SmackDown when she lost a Money in the Bank qualifying match against Dana Brooke.

I haven’t been posting much of myself lately bc I’ve just been down about all that’s going on in the world, helping my husband through his injury, and trying to figure out my next step (work)…it’s been a lot to process but today I woke up feeling HOPEFUL ?and ready to rock pic.twitter.com/XwtpDqxlmU

Naomi is a very talented wrestler. Check out some of the things she has done in the ring:

Opinion: Naomi is the kind of person who can offer a useful service. While she might not ever be the focal point of the division, she can have a good match against just about anyone and has the charisma to make a lot of things work well. Hopefully she is able to come back to the ring sooner rather than later because she is someone who could be helpful on either brand.

Where should Naomi go? What do you want to see her do in WWE? Let us know in the comments below. 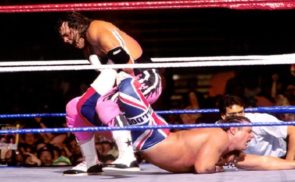