So we’re coming off Tables, Ladders And Chairs where the Fiend was burned alive to end the show. That’s kind of intense, but it’s cool because he sent out a tweet about twenty minutes later just in case there was any emotional impact built up. Last week’s numbers were an all time disaster and there is a chance we’re in for a shakeup (it’s been long enough since they’ve, ahem, fixed the problems around here) tonight. Let’s get to it.

Here’s Charlotte, now billed as a thirteen time champion because of the Women’s Tag Team Title, to get things going. We look at Charlotte returning last night to help Asuka against Nia Jax and Shayna Baszler, with Charlotte saying that she’s always willing to help a friend when asked. Charlotte introduces Asuka, who comes out to rant in Japanese, before switching to English to say she’s a double champion.

Charlotte brings up the Raw Women’s Title, friend to friend of course, but here are Baszler and Jax to interrupt. Nia says Charlotte took six months to heal up her broken arm but that voice is still just as robotic. Charlotte mocks her for losing last night but Nia says the two of them have a naughty or nice list. They just hand out beatings, like the one they gave to Lana.

Cue Mandy Rose and Dana Brooke, who are scheduled to face Jax and Baszler later tonight. Mandy thinks something looks different about Dana. She can’t figure it out, but she knows Baszler looks like Rudolph with a nose job and Jax is a reindeer without antlers. Then they get it: they aren’t the champions anymore. Charlotte says get a referee out here and the champs will sit around and watch.

Charlotte and Asuka are on commentary as Baszler takes Rose down to start. Rose tries some grappling of her own and Baszler has not time for any of that, kicking her away without much trouble. A kick to the head gets two on Baszler though and it’s off to Brooke for a double suplex. Jax comes in and gets taken down with a very spinning headscissors. An ax handle to the knee and a knee from Rose put Jax on the floor.

The double dives take out Jax and Baszler but Rose and Brooke stop for a staredown with Charlotte and Asuka. Jax sends Rose into the barricade though and we take a break. Back with Rose slugging away on Jax but getting taken down by Baszler. Jax and Baszler stomp away on the leg but Jax misses the legdrop.

Baszler gets knocked off the apron though, leaving Rose to clothesline Baszler and hammer away in the corner. It’s off to Brooke for the cartwheel splash and a step up enziguri drops Baszler. The Swanton gets two with Jax making the save so Brooke takes Jax down on the floor. Baszler kicks Rose down though and hits a spinning backbreaker on Brooke. The stomp onto the arm misses but Baszler Kirifuda Clutches Brooke for the tap at 12:56.

We look back at the Hurt Business winning the Tag Team Titles last night.

Here’s the Hurt Business for the VIP Lounge. MVP brags about their success and says the VIP Lounge is for people better than you. Shelton Benjamin and Cedric Alexander brag about their win last night and Bobby Lashley says no one can beat him for the US Title. MVP thinks it’s a special occasion so he has a professional photographer for a photo. R-Truth photo bombs them though and the merry band of idiots chases him off.

Cue Riddle and Jeff Hardy to interrupt, with Riddle saying the Hurt Business should be chilling instead of being worried. Maybe listen to the Joe Rogan podcast or watch a Dave Chapelle special and escape the existential nature of life. After all, we’re all carbon based lifeforms living on a rock hurdling into space. MVP: “Nobody knows what you’re talking about. Nobody cares about your hair brained concepts. Why are you here?” Hardy says there is more to life than status and they would rather die with pride than live a life of greed.

Before the match, Garza gives the backstage interviewer a rose and offers her a post match interview under the mistletoe.  Garza TAKES OFF HIS PANTS and throws them at Gulak to start, meaning it’s time to hammer away early on. A backbreaker gets Gulak out of trouble but Garza chops him in the corner. Garza hits a running knee to the ribs for one but the Wing Clipper finishes Gulak at 2:13.

We look at Drew McIntyre successfully defending the WWE Title last night against AJ Styles and Miz, who cashed in Money in the Bank.

AJ Styles blames Miz for costing him the title. Now he’s going to be on MizTV to hear an explanation and it better be good.

It’s time for MizTV. Miz apologizes for losing last night and brings out AJ for another apology. AJ yells at Miz for costing him the title by failing at a cash in but Miz snaps, saying he successfully cashed in ten years ago. Now he can’t do it again, because he has been here for fifteen years and no one respects him. Maybe becoming champion again would make people respect him but now he won’t have the chance.

Miz apologizes to AJ because they were both robbed last night. He even has a peace offering: AJ Styles can co-star in the next Marine film! We see a poster, which features Miz and Omos front and center, with a tony AJ on the head. Omos grabs the mic and says Miz screwed up last night but Morrison defends him. AJ talks about how Omos was about to have a peanut butter and Morrison sandwich last night but AJ called him off. Hang on though as Miz thinks that because he didn’t lose the match, he should get the contract back.

Miz demands it back RIGHT NOW but here’s Drew McIntyre to say he had a little celebration after he won the match last night. There was a little celebration and he, Keith Lee and Sheamus had an idea for a sequel to last week’s Night Before TLC. Sheamus and Lee pop up to read their part of the poem, which is all about tonight’s six man street fight. Drew thinks we should just do it now, but AJ dropkicks Lee into Sheamus, meaning Drew has to separate them.

We recap Retribution trying to recruit Ricochet over the last few weeks.

Drew has to keep Sheamus and Lee apart in the back. Sheamus leaves and Drew tells Lee that the three of them can do some damage together. Lee eventually agrees.

Retribution is at ringside as Ricochet kicks away at T-Bar to start. The springboard spinning crossbody is pulled out of the air though and the standing backbreakers let T-Bar toss him around. T-Bar blasts him with a clothesline for two and we hit the chinlock. Back up and Ricochet low bridges him to the floor but has to deal with Shatter and Mace. That’s enough for T-Bar to get in a boot from behind, but Mustafa Ali stops T-Bar to yell at Ricochet. T-Bar saves Ali from Ricochet and Feast Your Eyes gives T-Bar the pin at 2:43.

New Day says they’ll be back after last night’s loss.

Bobby Lashley/MVP for the Hurt Business here with the rest of the team at ringside. Hardy jumps the Business to start and hands it off to Riddle in a hurry. Riddle doesn’t do so well as Lashley takes him into the corner, meaning MVP can come in for the choking. A neckbreaker gets two on Riddle but he gets in a shot of his own, allowing the tag off to Hardy.

The legdrop between the legs into a basement dropkick gets two on Lashley, who powers out on the kickout. Broetry in Motion hits Lashley and the assisted Floating Bro keeps MVP in trouble. We take a break and come back with Hardy being knocked off the top and onto the steps on the way to the floor. Lashley starts going after the arm and MVP adds an armbar with an elbow into the shoulder.

The Ballin Elbow gets two but MVP misses a charge in the corner, allowing Hardy to hit the Whisper in the Wind. The hot tag brings in Riddle to clean house, with Alexander’s distraction not slowing him down in the slightest. A fisherman’s suplex connects but Lashley makes a very fast save. Riddle takes out Alexander and Benjamin but Lashley avoids the Swanton. The Twist of Fate is countered into the Hurt Lock and the tap at 11:50.

Here’s Elias for a song. He talks about how rough of a year it has been but he has discovered someone who understands the Universal Truth in Jaxson Ryker. Now get his opponent out here.

Ryker throws him around to start as Elias sits on the turnbuckle for a song. Metalik avoids a charge into the post and hurricanranas Elias, but Ryker runs him over. The sitout chokebomb finishes Metalik at 57 seconds.

We recap last night’s main event, including the post match burning of the Fiend.

Here’s Randy Orton for a chat. He has been called sick, twisted, deranged and demented and last night, he showed he was all of those things when he burned the Fiend alive. Orton is not a normal man and he enjoyed every single second of what he did. He kneels down to look at the exact spot where it happened and says he can smell it if he closes his eyes. Orton: “Burning flesh has a tendency to linger.” Last night he couldn’t sleep because the voices in his head were gone.

All that he could hear instead was the Fiend gasping for breath and the flames got hotter. Orton says the Fiend is no more and he is the evil son of a b**** who took him out. Speaking of out, the lights go out and Alexa Bliss, on a swing set is in the ring. Bliss says he built this for her and now it’s Alexa’s Playground. Orton is probably wondering where He is. Maybe He is at a tanning salon or at the beach or maybe he’s at his favorite restaurant, eating his favorite food (Bliss: “Barbecue!”).

But Orton is right: it was right here where you can still see and smell what happened to the Fiend. It’s almost like Fiend was absorbed into the mat and now he’s home in the earth. But if he ever leaves home, he’ll come back to Alexa’s Playground and it’ll be like nothing Orton has ever seen. The lights go out again and…..we look at commentary.

We look back at Charlotte returning to win the Tag Team Titles last night. 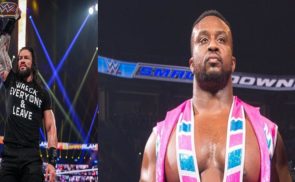