We’re almost to the biggest Ring of Honor show ever and that means we should be getting an update on it in just a month or so because ROH can’t figure this out to save their lives. In other words, this is another lame duck show in a series of them, meaning we could be going in a variety of ways. Let’s get to it.

They’re Young Lions from the New Japan Los Angeles dojo, meaning black trunks and boots with a limited moveset. Dalton takes Conners down with ease to start but Conners says bring it on. The amateur wrestling goes to Castle and an airplane spin sends Conners over for the tag to Alex. Both Boys tag themselves in at the same time and Coughlin has to deal with both of them at once, meaning a dropkick from #1.

Coughlin isn’t having any of the chops and drops #1 with some of his own. Back from a break with everything breaking down and the hot tag bringing in Castle to slug away at the Lions. Suplexes drop all three of them as Aldis can’t remember which Boy is which either. Castle is alone in the ring and says to BRING HIM A BOY, both of whom are thrown onto a Lion, with both of them getting three turns each.

Back in and Conners gets powerbombed for two with Fredericks making the save. #2 gets the tag but is sent straight into the post, leaving Castle to take a double flapjack. Conners knocks #1 into the corner and a hard chop sets up the Boston crab. Castle makes a save of his own and pulls Conners outside, allowing #2 to take #1’s place. The small package finishes Fredericks at 10:08.

We look at Bandido beating PJ Black in January.

Black calls the loss an eye opener that made him see that the cheating wasn’t working for him. The rematch is in two weeks.

That would be Chris and Patrick (twins). They’re rather small and have lights in their hair as they seem very excited to be here. Aldis things the Twins, who don’t shake hands and offer a double thumbs down, are a little intoxicated. Patrick gets run over to start so Chris offers a failure of a distraction.

Another attempt lets Patrick chop block Bruiser down but the fans chant for beer. Since the Twins aren’t all that great, they allow Bruiser to roll over for the tag to Milonas so the big splash can connect in the corner. One heck of a clothesline puts Patrick on the floor and it’s the Last Call to Chris at 3:20.

The Briscoes are ready for Jeff Cobb and Willie Mack.

Young’s headlock takeovers are countered with headscissors so he rakes the eyes instead. A test of strength goes to Young as well, with the boot to the ribs helping things out. They head outside for the exchange of chops with Gresham holding his own until they have to dive back in to beat the count.

Back from a break with a series of standing switches until Young realizes he’s in over his head. They head outside again with Gresham hitting a dive, only to miss the high crossbody back inside. A suplex sets up a double arm crank on Gresham, who gets out of it as easily as something that is easy to get out of. Young tosses him to the floor in a heap and a hard whip into the corner keeps Gresham’s back in trouble.

We take another break and come back with Gresham getting two off an O’Connor roll and spinning into a DDT to drop Young again. Gresham hits a running basement dropkick in the corner before bridging up into a failed backslide attempt. Young’s rollup gets two and it’s a double clothesline for a double knockdown. A Death Valley Driver into a bad looking double stomp gives Young two more and they’re both down again. The hanging swinging suplex gets two more but Gresham starts in on the leg.

For some reason Gresham is fine with a slugout, with some running forearms getting two each. Young gets sent into the ropes for a snap German suplex into another forearm for two more. Gresham sends him outside for a suicide dive and a shooting star press….only gets two again. It’s straight into an ankle lock until Young rolls him into the referee. A low blow into a rollup gives Young the pin at 21:50. 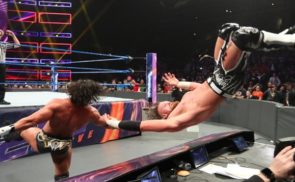 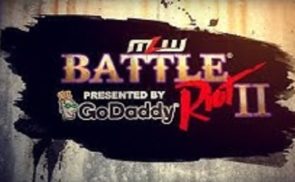