It’s time for another one of these and I’m not sure what there is to think about it anymore. These empty arena shows are draining me of any reason to care and this is my least favorite time of the year. We’ll be seeing a lot of Money in the Bank build and that isn’t exactly thrilling stuff. Let’s get to it.

You may remember Catalina from her short term run on Raw. Asuka takes her into the corner for a grab of the mask and it’s time to walk around a bit. Catalina grabs the arm to send Asuka face first into the mat but Asuka is right back with an armbar. An armdrag sends Asuka outside and Catalina hits a running boot to the face.

That’s about it for Catalina though as Asuka hits her in the face on the floor and kicks her in the head back inside. An armbar and the running hip attack in the corner have Catalina in more trouble and a bulldog gets two. Catalina fights back with a clothesline but misses the twisting Swanton. A kick to the head sets up the Asuka Lock for the tap at 7:04.

It’s time for A Moment Of Bliss to start things off. After bragging about being two time Women’s Tag Team Champions (I completely forgot their first reign, which isn’t a good sign for titles that are fourteen months old), Nikki Cross brings out Braun Strowman. They congratulate Braun on being the new Universal Champion but bring up the fact that he is officially defending against Bray Wyatt (not the Fiend) at Money in the Bank.

Strowman knows Bray and the games he plays so Bray is going to get these hands. There’s a present on the mat though and it seems to be for Braun. Inside is….the old mask he wore as part of the Wyatt Family. Braun looks upset and we hear Bray’s laughter as a picture of Braun in the mask comes on the screen.

We see some men qualifying for Money in the Bank.

Money in the Bank Qualifying Match: Rey Mysterio vs. Murphy

Rey headlocks him down to start and it’s an early standoff. Murphy takes over with an armbar but has to duck an early 619 attempt. Some forearms put Rey on the floor and Murphy drives him into the barricade. Back in and Murphy stays on the arm until Rey armdrags him to the floor.

That works fine for Murphy, who catches a dive and stomps on the arm on the ramp. Back from a break with Murphy still on the arm but Rey snaps off a hurricanrana on the floor. They get back in with Rey hitting a tornado DDT and heading to the apron again. A dropkick sends Murphy into the barricade but he’s right back with a spinning facebuster onto the knee. Murphy’s brainbuster gets two so he goes up top, only to get caught with a super Destroyer. The 619 into the frog splash finishes Murphy at 15:09.

Shelton quickly wrestles him down to start as MVP gets on Phillips for not acknowledging his great point about Shelton’s career. Back up and Carrillo sends him into the ropes, setting up some rapid fire forearms to the face. They wind up on the apron for stereo big boots and we take a break.

Back with Carrillo slipping out of a suplex and kicking away, only to get caught with a running knee in the corner. Another suplex lets Shelton chuckle a bit and we hit the chinlock. That’s broken up and Carrillo grabs a running hurricanrana. Shelton powerbombs him out of the air but is quickly small packaged for the pin at 10:41.

Miz is defending the titles on his own. The challengers waste no time in sending Miz outside before Big E. runs Jey over. Big E. talks about having a plan but the other two are back up to suplex him through the announcers’ table. We take a break and come back with Jey hitting back to back suicide dives.

The running Umaga Attacks in the corner make it worse but Big E. catches Jey with the Rock Bottom out of the corner. Miz even goes aerial with a springboard ax handle, allowing him to start the HEY HEY HO HO. Miz can’t Figure Four Jey, who kicks him into Big E. for two instead. The Skull Crushing Final gets two on Jey and now the Figure Four goes on. Big E. breaks that up with the Big Ending to Miz for the pin and the titles at 9:45.

That’s one way to do it:

We cut to Kofi at his house for an AND NEEEEEEWWWWW for a nice smile inducing moments.

Xavier Woods throws in a bunch of plugs.

Big E. rolls around on the floor shouting EIGHT TIMES to end the show.

Non-title and Vega and company are at ringside again. McIntyre goes straight for the knee to start and there’s the overhead belly to belly to send Garza rolling to the floor. Some chops against the barricade have Garza in trouble and Andrade’s posting fails. So does Garza’s suicide dive and McIntyre headbutts him, only to have to deal with Theory.

That allows Garza to hit a posting, followed by a missile dropkick for two back inside. McIntyre fights out of a half crab and kicks Garza in the face. Garza tries to escape so McIntyre PULLS OFF GARZA’S PANTS as Garza gets to the floor. The big flip dive connects and McIntyre takes out Andrade and Theory. Back in and the Claymore finishes Garza at 5:02.

Post match McIntyre gives Garza another Claymore. Theory comes in and gets one of his own for good measure. McIntyre chases Andrade up the ramp and strikes the Tranquilo pose to end the show. 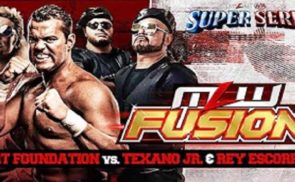