It’s a heck of an endorsement. There may be no star in the world of entertainment as big as the Rock. He has gone from being a top name in professional wrestling to an A-list movie star who still dabbles in wrestling every now and then. That gives his voice a big impact when it comes to wrestling and that voice has picked something else again.

We are living in a time where wrestling is getting more mainstream attention than ever before. Wrestling stories are being shown at a much more frequent pace both in fiction and non-fiction forms. That is some very good news for wrestling fans, who do not get to see their sport presented this way very often. There is one option that is above most of the others and it has caught the Rock’s eye.

The Rock has tweeted out an endorsement of next week’s episode of Dark Side of the Ring, which he has seen in advance. The episode will focus on Schultz slapping 20/20 host John Stossel and leaving wrestling soon thereafter. Rock mentioned that he had been a fan of Schultz since the two met in Hawaii when Rock was twelve years old. The show airs Tuesday night at 10pm EST on Vice TV.

This man was one of my all time fav heels (bad guys) in pro wrestling and an influence on me when I first shook his hand in Hawaii when I was 12. I’ve seen an early cut of this episode and highly recommend you watch, if you have any squared circle DNA in your blood. #DrD https://t.co/duvkZgeSJ2

You might not be familiar with Schultz. Check out some of his time in the ring:

Opinion: That’s quite the endorsement and there’s nothing wrong with more fans getting to watch a wrestling show. The series has been rather enjoyable since the beginning and I’ve had a good time with this season. Schultz is one of those people who a lot of fans have heard about but might not know many details about them. That’s where this show can fill in the gaps and it can be incredibly entertaining as a result.

What has been your favorite episode? What else would you like to see on the show? Let us know in the comments below. 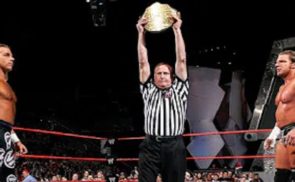 Tags: Dark Side Of The Ring, News, Other, The Rock