And then there were two. We’re down to what seems to be the final two shows for Major League Wrestling and I’ve been liking these shows from Mexico. If nothing else, it’s been hilarious watching the Dynasty as they are some of the best things going in this company at the moment. Hopefully the matches can live up to their standards. Let’s get to it.

We open with a recap of the MLW vs. AAA Super Series, which is currently tied at 2-2. There are two more matches this week.

Holliday is defending and anything goes. Before we get going, Holiday speaks some broken Spanish to brag about his Air Pods. Cue Chessman with a chair and we’re ready to go. Hold on though as Holliday holds up the title himself and makes sure to use some hand sanitizer. Chessman hits him in the face and dropkicks him to the floor but Holliday blocks a dive with the chair.

More chair shots stagger Chessman and give Holliday a VERY slow two as the referee doesn’t seem to think much of Holliday. Some shots in the corner connect as we hear about MLW officially complaining about the AAA refereeing. Holliday stomps away even more but a quick chase lets Chessman stomp him down.

That sends Holliday back to the floor for the big suicide dive into the barricade. Now it’s Chessman’s turn to use the chair and it’s time for a strike off back inside. A double clothesline puts them both down but it’s Holliday up first with a superkick. Holliday grabs 2008 for two so Chessman is right back up with a running boot to the face. The moonsault gives Chessman two but a second attempt misses, meaning the Market Crash can finish Chessman at 6:23, even with the referee not wanting to count the pin.

We look back at Mance Warner and Alexander Hammerstone fighting last week, with Hammerstone going into the birthday cake.

Warner understands that Alicia Atout is upset at him for messing up the birthday party so he apologizes. She can even have a light beer! Alicia is just glad that the a****** MJF is gone. Warner is glad too and now he needs some gold so how about a title shot at Hammerstone?

Douglas James will be out for at least 180 days unless he can get clearance.

And now, Pillow Talk With LA Park. Park is laid next to his wife, who complains that he is asleep while she says goodnight over and over. The laugh track certainly seems to approve as she yells at him. Technical difficulties take us out.

Pagano thinks you can’t have a party without a clown.

Alexander Hammerstone doesn’t understand how society has been turned upside down. People like him are booed and alcoholics like Mance Warner are cheered. Hammerstone should be rocked to the top but he has to deal with speed bumps like Warner over and over. So now Warner wants a title shot? Well Hammerstone will wreck him.

Colonel Robert Parker has been trying to hold unsanctioned wrestling shows on barges outside of Tampa. This didn’t go well, thanks to the US Coast Guard.

The Von Erichs are ready for Team Filthy and jump off a cliff into a river.

Vikingo will be part of the Super Series.

MLW has complained about the AAA referees.

Low Ki staggers around a parking lot but promises to take care of Team Filthy and American Top Team, even if he has to call the King.

That would be Texano Jr. and Rey Escorpion Jr. Before the match, Texano shouts at the crowd in Spanish and they don’t seem happy. Given my limited Spanish abilities, I can see why. It’s a quick brawl to start until Pillman grabs a wristlock on Texano. Pillman has to spin/flip out of Texano’s wristlock and there’s a running slap in the corner. A poke to the eyes gets on Davey’s nerves, allowing the villains to double team Pillman down. He’s right back up to take Texano into the corner for a double suplex but Pillman lets Davey hit the delayed single instead.

That gets a very delayed two so Davey goes back to the arm. Injustice pops up in the crowd as Escorpion comes in to slam Davey, setting up a double superkick for two. An AA backbreaker gets one on Pillman but the referee stops to yell at Davey some more, allowing some double kicks to the face to keep Pillman in trouble.

Escorpion grabs the chinlock but Pillman gets up for a slugout. That just earns him a pull down by the hair so Davey comes in, earning ANOTHER long rant from the referee. Texano gets two off a slingshot hilo and the bull rope to the knee has Pillman in even more trouble. A powerbomb gets two with Davey making a save so Pillman finally hits a jawbreaker and dropkick.

The referee doesn’t see the blind tag though and the stomping continues. Pillman gets over to the corner and crossbodies both of them and NOW the tag brings in Davey to pound away. Texano gets backdropped onto Escorpion and Pillman hits a big no hands flip dive to the floor. Back in and a springboard Hart Attack finishes Texano at 10:27.

We preview next week’s show but Contra pops up to say the war is coming. If this isn’t the same promo from a few weeks ago, it’s close enough that it doesn’t make a difference. 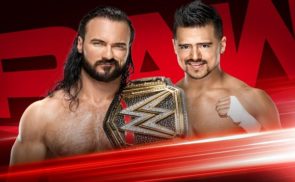 WWE Releases Another Legend After 35 Years