We are about five weeks away from Double Or Nothing and that means it is time to start setting up the show. The good thing is you can probably guess a good chunk of the card from here so it isn’t like they need to do a ton of work on the way there. We also have Blood & Guts coming up in two weeks and it needs one more push. Let’s get to it.

Starks has Hook with him and promises to take care of Page, who has poor interview etiquette. Taz joins in on commentary as they trade headlock takeovers to start. Page counters a leapfrog into a slam and stomps Starks down into the corner. A springboard clothesline puts Starks on the floor and there’s a slingshot dive to drop him again. Back in and Starks sends him throat first into the middle rope to take over. Some choking ensues but Starks has to stick the landing on a belly to back flip suplex.

Starks’ springboard is clotheslined out of the air to give Page two and a brainbuster gets the same. An Alabama Slam out of the corner is countered though and Starks’ sitout powerbomb gets two. The fall away slam sets up a running clothesline for two more on Starks but the Buckshot Lariat misses. Starks spears him down for his own near fall and escapes the Deadeye. Instead, Page pulls him down into a bulldog choke and pulls back on the leg to make Starks tap at 8:56.

Post match Taz tells Page to watch his back and Hook takes him down with a chop block. Page tries to fight them off but Brian Cage comes in to keep up the beatdown. The Dark Order runs in for the save.

Trent has the question mark behind his name again and commentary isn’t sure why it’s there. Trent starts fast by taking Penta down for a running Meteora and then knocks him outside for the big flip dive (thankfully not injuring his leg when it crashes into the barricade).

Back in and Penta hits a quick Sling Blade into the Canadian Destroyer and we take a break. Of note: during the break, an ad for Rich Swann vs. Kenny Omega at Impact’s Rebellion on Sunday aired. Aside from a throw away line here or there, that might be the first mention of the match on AEW TV.

We come back with Penta hitting a Backstabber for two and the Pentagon Driver is good for the same. They head to the apron and Trent drops Penta to the floor, but Penta’s translator says that Penta has a message for him: Trent sucks, but not as much as Trent’s mom! Trent grabs a chair to go after him but walks into a microphone shot to the face into the package piledriver to give Penta the pin at 10:37.

Earlier today, Jim Ross sat down with the Pinnacle for a chat. MJF talks about having his scarf for years, but Tully Blanchard has sent him a gift: a new scarf! Wardlow brings up JR calling Chris Jericho’s recent statements the immortal promo. Jericho cut a great promo (not as great as MJF’s of course) but he stumbled a bit on Wardlow.

That’s because he knew he was doing something wrong, because you don’t mess with Wardlow. MJF accuses Jericho of standing around a bunch of B’s so you look like an A and wrestling a bunch of B’s so you don’t look like an A. Jericho has tried to latch on to a bunch of popular stars like Jon Moxley and Orange Cassidy, which worked well until he got to MJF. Jericho likes to say that MJF is great for 25 but that is BULL S***!

MJF is great for any age and he finds it interesting when Jericho says go beat some low level people. See, he remembers beating Jericho, which means that MJF is better than him and Jericho knows it. The one thing Jericho got right was saying that MJF is a mark, but it is for Jericho’s spot. At Blood and Guts, MJF is taking it.

Video on Hikaru Shida vs. Tay Conti for Shida’s Women’s Title. Shida respects her, but it is time to fight.

Conti is challenging and the Dark Order goes to the back to let her do this on her own. A hard forearm doesn’t do much to Shida to start and it’s time for the slugout. Conti judo throws her over and grabs a chickenwing with a bodyscissors. Shida gets to the ropes for the break and heads to the floor for a needed breather. Conti tries to follow but gets tripped down, setting up a running knee to the face.

An enziguri catches Conti again and a suplex drops Conti hard. Back in and the surfboard goes on but Shida switches into a reverse chinlock to keep Conti in trouble. We take a break and come back with Shida hitting a superplex but Conti pops up to kick her in the face. A German suplex drops Shida again and some running kicks to the face in the corner put her down again.

Shida is laid across the top rope and Conti adds a top rope backsplash for a near fall. The DDTay is broken up and Shida hits a running knee to the face. The Falcon Arrow gets two and Shida drops her hard to the floor. Back in and Conti nails another pump kick, setting up the TayKO for two. They strike it out again until Shida drops her with a slap. A fireman’s carry into a backbreaker sets up the Katana to retain the title at 12:18.

Post match here’s Britt Baker, who shows us the updated rankings….with her at the top.

Miro is sick of Kip Sabian not being here and he is ready to beat people up.

Here is the Inner Circle for a chat. After we reaffirm Jericho’s rock star status with the fans singing Judas back to him, Jericho talks about how Mike Tyson knocked Shawn Spears’ teeth out. Jake Hager has straws for the Pinnacle because they are going to be drinking meat through straws after Blood & Guts. Santana finds it interesting that MJF is only doing his talking when he has people behind him. They have seen the color of their blood and now they are going to see the size of their hearts.

Jericho talks about MJF singing show tunes on Rosie O’Donnell so Jericho has written a show tune of his own. The song recaps the Inner Circle returning and MJF’s head going into a toilet but Jericho drops the singing rather quickly. It is great to make jokes but next week, the teams are having a parlay, meaning a meeting to discuss battle plans, before Blood & Guts. Jericho gets serious and says that MJF better own his soul because on May 5, they own the Pinnacle’s a**.

Gunn goes after Marshall and company before the bell to take over early. A suplex into a tilt-a-whirl slam sends Marshall outside so the referee checks on him. That lets Anthony Ogogo jump Gunn so the Gunn Club dives out of the crowd to take care of them. Back in and Marshall punches him down and mocks the SUCK IT. You don’t do that to Gunn, who is back up with some right hands. The Fameasser and Diamond Cutter are both avoided so Gunn is sent to the ramp. Cue Anthony Ogogo again to hit the gut shot to drop Gunn, allowing Marshall to get the pin at 4:18.

Result: QT Marshall b. Billy Gunn – Punch to the ribs from Anthony Ogogo (4:18)

Post match Ogogo hands Marshall a chair but Dustin Rhodes runs in for the save. Nock Commarado comes back in so Dustin breaks the wooden chair over his head to no avail.  Referees break it up.

The Elite is in the back and talks about how they are the reason business was up in Japan. They are the reason for the Bullet Club shirt exploding and the revolution that became AEW. Kenny Omega is sick of Jon Moxley but we keep hearing a horn….and Omega demands it be taken care of. It’s Moxley in his truck, which he rams into the side of the trailer the Elite was in. Eddie Kingston gets out of the truck and they go inside the trailer, armed with pipes. The Elite is gone, which Moxley describes as “b**** AF”. He throws the pipe through the window anyway, with Kingston asking if Moxley could wait until he is out of the way.

Taz is on commentary again and Hobbs powers Christian into the corner to start. A waistlock works a bit better, or at least it does until Hobbs slams him down. They head outside with Hobbs hitting him in the back of the head, setting up a toss over the barricade. Hobbs grinds his face against the barricade and we take a break. Back with Hobbs stepping on Christian’s chest but the Vader Bomb is countered with some raised boots to the face.

The pendulum kick connects in the corner and a top rope back elbow gives Christian two. Hobbs is back with a heck of a spinebuster for two (not powerbomb JR) but gets powerbombed out of the corner. The frog splash gets two but Hobbs sends him into the corner for the running hip attack. Hobbs has to power out of a sleeper so he sends Christian into the corner, only to have Christian come back with the Killswitch for the pin at 10:20.

Here is what’s coming next week.

Jade Cargill talks about how every manager wants her and we hear from Matt Hardy and Vickie Guerrero about why she should sign with them.

Allin is defending and Sting and the rest of the Jurassic Express are here. They go technical to start with both of them grabbing a rollup for two each. Boy works on the wristlock and armdrags him into an armbar. That’s broken up with Allin’s springboard armdrag and they start getting in each others’ faces. Allin takes him down and hammers away so they head to the floor to keep up the fight.

Some chops have Boy staggered but he tackles Allin over the barricade as we take a break. Back with Allin charging into an elbow in the corner, allowing Boy to grab a bridging German suplex for two. A tiger suplex gets the same but Allin is back with the flipping Stunner. Boy sends him outside for the back to back suicide dives into the flip dive over the top. Back in and Allin stomps away, setting up the Coffin Drop back to the floor.

Luchasaurus has to help Boy back in, which gets Sting in his face. They fight to the back, leaving Boy to blast Allin with a clothesline. The brainbuster into a running elbow to the back of the head gets two on Allin and the Snare Trap goes on. Allin has to go to the eyes for the escape so Boy forearms away out of desperation. They get back up and Allin pulls him into the Last Supper to retain at 14:45.

Post match Ethan Page and Scorpio Sky run in to beat Allin down. Lance Archer runs in for the save but gets beaten down as well, drawing out Sting with the baseball bat for the save to end the show. 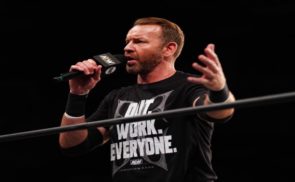