As has been the case for the better part of two years, we are in the Roman Reigns reign in WWE, as Reigns has held the Universal Title since August 30, 2020. That is more than enough to make his time as champion an all time great, but despite some great matches and an aura that no one else has, things might be getting a bit tiresome. Today we are going to look at the problem with Reigns’ reign, plus another champion who has been presented in a much better way.

To say Reigns has dominated SmackDown, and WWE in general, in the last twenty two months is an understatement, as Reigns has been presented as the biggest star in the company with no one coming close to taking the title from him. There is a good chance that we are coming up on the actually epic showdown of Reigns vs. The Rock at WrestleMania 39 next year in Los Angeles, but that brings up more than a few problems.

Reigns has beaten all kinds of challengers during his time with the title and at the moment, it does not seem like there is anyone who is going to give him a real run for his money. Sure there are people you could put in there against Reigns to go after the title, such as Randy Orton or Riddle, with Drew McIntyre around as the major challenger, but outside of them, who is there? That doesn’t leave many options for serious challengers and that is where the problem begins.

When you get down to it, there is no one who is a serious threat to Reigns, meaning there is little reason to believe that he is going to be losing anytime soon. Barring some kind of an injury or a problem, there is nothing to make you believe that anyone but Rock is going to take the title from Reigns. That doesn’t leave much in the way of drama, and that is where the problem lies.

As a fan who is supposed to be drawn in by the main event of a show, how am I supposed to be interested in a match where the World Title isn’t likely to be changing? You can do that every now and then (ala the Jey Uso matches), but when there is no reason to believe the title will change hands, the interest goes away in a hurry. That is the case with just about every Reigns title defense these days, which is quite the problem. At the same time though, there is a title reign out there which shows how things can go in a very different direction.

We are less than two weeks away from NXT In Your House and the show’s card is mostly set. This includes a main event of NXT Champion Bron Breakker defending the NXT Title against Joe Gacy in a rematch of a showdown that took place a few weeks ago. Breakker has already successfully defended the title against Gacy so some of the drama is gone, but at the same time, there is one thing going for the match that makes it more interesting in a way that Reigns’ matches just don’t have.

It isn’t that much of a surprise that Breakker is clearly someone who is going to be pushed as a major star in WWE. You do not see a prodigy like him very often and it opens up all kinds of possibilities for what you might get out of him in the future. That being said, Breakker is still pretty new at the whole wrestling thing, having only debuted back in September. That means there are still holes in his game and some opponents are going to be able to take advantage of them. Dolph Ziggler did just that to Breakker, which is why he beat Breakker for the NXT Title back in March.

Heck if you want a less serious version of the same problem, look at the 24/7 Title. Yes the title changes hands almost every week, but does it really matter if the same person wins it back ten seconds later? If the end result is the same every time, there is no drama and therefore no stakes, meaning there is no interest in what is being presented. When fans don’t care, why are you even doing anything in the first place?

At some point, a title match has to have the slightest sliver of doubt. If you have an unbeatable champion, there isn’t much of a point to watching the match. While the point of the buildup to a title match is to make you believe that something could happen, that doesn’t mean it is something that is going to work every time. I haven’t bought any of Reigns’ opponents as a real threat to him for a LONG time now and that has rapidly become a problem.

I know that WWE won’t do it because it would waste a lot of their time, but one of the best things that they could do is having someone take the title from Reigns. Even if he gets it right back a few days later (or even the same night), it opens up the possibility that any future title match could be the one where he loses. Granted that might not be the strongest possibility, but it is better than anything else they are doing at the moment.

Sometimes you just need to shake things up a bit and it can make all the difference in the world. WWE even knows how to do this as they will occasionally have a title change at a live event. After a long stretch of NOTHING happening at live events, the Tag Team or United States Title might change hands. Sure it is a little ridiculous to think that it is going to be happening again at any time in the near future, but being able to point to something so recent is a heck of a lot better than wondering how many years it has been since the last title change.

Now of course WWE isn’t likely to have Reigns drop the title anytime soon, certainly not with WrestleMania 39 starting to come into the distant view, but it might be just what the title reign needs. Reigns has been WWE Champion for the better part of two years now and that is going to get dry at some point. I know the Riddle and Orton matches are likely coming up, but how interesting are those really going to be? How many people are actually going to buy either of them as a real threat to end the title reign after all this time?

So maybe McIntyre is the next big hope? Well maybe, but how much has McIntyre cooled off in the last few months? He spent the first part of 2022 feuding with Happy Corbin and Madcap Moss so it isn’t like his stock is all that high. There isn’t anyone else to come after Reigns other than maybe (with an emphasis on that word) Bobby Lashley but it isn’t like that is a match people are banging down the door to see. Reigns needs something else and a loss might be it.

Reigns has been champion for a long time now and odds are he is going to continue to be the champion for a very long time to come. That might sound good on paper, but eventually something needs to be shaken up. Until that happens, we are in a title reign that isn’t going to draw the most interest, meaning a lesson could be learned from….Gacy? 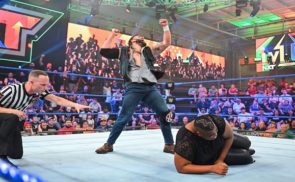