We are a month away from Bound For Glory and it seems that we have a main event. At Victory Road, X-Division Champion Josh Alexander announced that he was using Option C to cash in his title for a shot at Christian Cage’s World Title. This has been teased for a few weeks now and is the absolute best idea that they have at the moment. Alexander feels unbeatable and that comes from months of putting in the effort. Let’s get to it.

Here is Scott D’Amore to get things going. He explains Option C and brings out Josh Alexander, but reminds him that once he hands over the title, a tournament begins to crown a new champion. Therefore, make sure this is what you want. Alexander talks about having neck surgery six years ago and having doubts about his future. He has no doubts this time though, because he knows he can be the face of this company.

This brings out Christian Cage, who says Alexander almost lost his career but Christian DID lose his career for seven years. Cage tells him to think about this, because right now he is the face of the X-Division, but he won’t be the face of this company. Instead, he’ll just be a face in the crowd. Alexander says that makes his decision that much easier and hands over the title.

D’Amore leaves but here are Ace Austin and Madman Fulton to interrupt. Austin doesn’t go away quietly after a loss at Victory Road and calls out Alexander for being a quitter. He would never give up the title like that….but Alexander says that wasn’t an option because Alexander took the title from him. The fight is on but Austin’s cane shot hits Cage by mistake.

Rich Swann and Willie Mack aren’t happy with losing their Tag Team Title shot at Victory Road but they want their next shot. Mack wants in the X-Division Title tournament and Swann wants in the Call Your Shot gauntlet match. Cue Brian Myers to say he’s in the gauntlet as well, but he whines so much that a tag match is set for later tonight.

Josh Alexander complains about Ace Austin so Scott D’Amore makes the match between them for later tonight.

Chris Bey and Juice Robinson are the seconds. The massive Hikuleo drives him up against the ropes to start but can’t hit a shot to the face. Instead he hiptosses Finlay into the corner, making Finlay pause for a second. Finlay’s crossbody is countered into a slam and Bey tripping him from the floor makes it worse. Hikuleo kicks him in the face for two and we take a break.

Back with Hikuleo getting two off a powerslam and grabbing a chinlock. Finlay fights up and grabs a jumping neckbreaker, setting up a middle rope crossbody for two. The sleeper slows Hikuleo down for a bit until he powers his way out and hits a heck of a clothesline for two of his own. The chokeslam is countered into a Stunner though and Finlay avoids a charge, setting up a rollup for the pin at 11:14.

Post match the brawl is on again with FinJuice getting the better of things, but El Phantasmo, also Bullet Club, runs in to help with the beatdown.

Violent By Design says what happened to Rhino last week was necessary. Violence is the only cure for the sickness and while Rhino can apologize, he needs to decide and do the right thing. They need an answer next week.

Matt Cardona is done with Rohit Raju and Shera but Chelsea Green is ready to take out Raju herself.

Matt Cardona is here too. Raju shoves her into the corner to start but she’s back with a pair of kicks to the face for two. That earns her a hair takedown and a snap suplex gives Raju two of his own. Green Thesz presses him for some right hands to the face and a snap German suplex makes it worse. The jumping knee connects for Green but she can’t get the Unprettier, allowing Raju to grab a rollup and the ropes. Cardona breaks up the latter but here is the returning Raj Singh to send him into the steps. Raju grabs a small package for the pin at 4:07.

We look at W. Morrissey taking out Alisha Edwards at Victory Road.

Eddie Edwards swears vengeance but doesn’t want to hear from Sami Callihan. That doesn’t work for Sami, who wants revenge of his own. Moose comes in for the brawl but gets beaten down as Eddie wants to know where W. Morrissey is.

Myers says his learning tree isn’t ready to team with him in this match so he has a surprise partner: VSK, another of Myers’ students. Swann and VSK start things off with the latter hitting a surprise dropkick to take over early on. Back up and Swann nails his own dropkick, setting up a double flapjack with Mack’s help.

Myers comes in and gets flattened with a flying shoulder but a Zicky Dice distraction lets VSK score with a sliding German suplex. Mack fights up and forearms the heck out of Myers, allowing the double tags to Swann and VSK. The rolling splash gives Swann two but VSK grabs an elevated DDT for the same. Swann superkicks him out of the air though and a high crossbody (possibly due to Dice’s mistimed shove) is good for the pin at 5:16.

Johnny Swinger is worried about Impact going to Las Vegas and putting him out of business. He writes a letter to Scott D’Amore, who he thinks has just bought the company from Bob Carter’s daughter (Swinger: “Babe.”). Therefore, D’Amore needs to come to Swinger’s Palace next week and talk about this. Signed, JJ Dillon.

The Good Brothers are still on vacation because they have beaten every team around. They are on the top of the mountain and the only thing to do is knock any other team off the mountain.

Video on the Good Brothers.

Here is Mickie James for a chat. She is rather touched by her reception and talks about how awesome Empowerrr was, but Deonna Purrazzo has changed everything. Mickie calls Purrazzo out for a face to face chat so here is the champ. Purrazzo doesn’t like Mickie even saying her name after attacking her last week, which Mickie doesn’t buy.

Mickie throws out the Bound For Glory challenge, but Purrazzo isn’t interested in giving Mickie a boost with nothing in it for her. It’s a no, but the brawl is on anyway with security breaking it up. Cue Scott D’Amore to make the match for Bound For Glory.

Flashback Moment of the Week: Mickie James wins the Knockouts Title on Impact, May 23, 2013.

Eddie Edwards and Sami Callihan go after W. Morrissey, but get cut off by security. Scott D’Amore makes the street fight for next week.

Gail Kim announces a tournament for Knockouts Knockdown, featuring an eight woman tournament with four Knockouts and four from elsewhere. The winners get a Knockouts Title match, but here is the Influence to interrupt. Madison Rayne thinks they should get a Knockouts Tag Team Title shot, but Kim says they have to beat Rachael Ellering and Jordynne Grace next week.

Madman Fulton is here with Austin, who bails into the corner to start. Austin drives him up against the ropes for a clean break but Fulton trips Alexander from the floor. That doesn’t seem to bother Alexander, who snaps off a suplex to send Austin outside. Austin jumps up to the apron, where he gets caught with a quickly broken ankle lock. Back in and Alexander gets two off a delayed vertical suplex but a Fulton distraction lets Austin get in a kick to the head.

We take a break and come back with Austin grabbing the chinlock with a bodyscissors. That’s reversed into a quickly broken ankle lock so Austin hits a belly to back slam. Alexander pops up with a German suplex and Austin is rocked again. A running big boot drops Austin but the C4 Spike is broken up. Instead, Alexander rolls some German suplexes until Austin grabs the rope for a break.

Another C4 Spike attempt is broken up and Austin grabs a neckbreaker for two. Alexander knocks him to the apron for a suicide dive to the back, sending them both outside. Back in and Austin hits a heck of a superkick to knock Alexander off the apron and outside onto Fulton. The Fold is countered into a powerbomb onto the knee though and the C4 Spike finishes for Alexander at 15:12.

Post match Fulton comes in to stomp on Alexander and the beatdown is on. Christian Cage comes in for the save and helps clear the ring but Alexander isn’t pleased. Fulton and Austin come back in to jump the good guys….until Christopher Daniels of all people makes a surprise return for the save. Everyone is stunned as Daniels clear the ring to end the show. 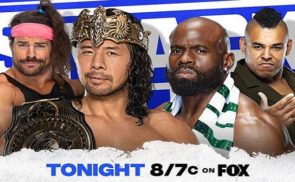