We’re still in New York and still pretty fresh off of Bound For Glory, with the big story being Killer Kross laying out World Champion Johnny Impact last week. There’s a lot going on at the moment and I’m actually wanting to see where some of it goes. Now if only they can keep that going for a bit and then pay it off. Let’s get to it.

The opening recap covers most of last week.

They were partners at Bound For Glory and they’re still cool here as Mack requested his friend for his singles debut. Mack headlocks him to start but Swann speeds things up and starts flipping around. Both guys try dropkicks at the same time so they nip up at the same time, meaning it’s a handshake. Mack picks up the pace with a hard shoulder and some knees to the back to set up a seated Blockbuster. A running vertical suplex gives Mack two and he cuts Swann down again with a spinwheel kick.

Swann gets tied in the Tree of Woe and Mack goes Coast to Coast. Mack sends him outside for a slingshot down and a pop up Downward Spiral gives Mack two more. A faceplant cuts Mack off though and Swann gets two off a middle rope 450. Mack is right back up with some running shots to the face in the corner and there’s a Samoan drop for good measure. A standing moonsault and Stunner get two each so Mack goes up, only to miss a frog splash. Swann pops up to the top and hits a Phoenix splash for the pin at 9:49.

OVE’s feed keeps messing up before they talk about being in Dayton, Ohio to call out Brian Cage for the beating he deserves.

The announcers preview the rest of the show along with talking about next week’s Final Hour show.

This is the NEW Squad, with Rohit Raju and Gama Singh’s son Raj. Raju clotheslines TJ Crawford down to start and the stomping begins. Raj comes in for a Cannonball in the corner so it’s off to Freddy Ivey, who gets kicked in the face. With Ivey in trouble, Raju pulls him up at two so the Squad can take turns stomping in the corner. A Samoan drop/jumping knee to the head finishes Ivey at 3:21.

The OGz are ready to take care of Konnan’s friends the Lucha Bros because the war isn’t over.

LAX is drinking in a bar where Konnan doesn’t think much of Matt Sydal and Ethan Page. Why Ortiz is bartender isn’t clear.

Video on Eddie Edwards vs. Moose, who have their big showdown next week (as opposed to Bound For Glory, where we got a Tommy Dreamer match instead). They used to be friends but Moose turned his back on him, saying that Eddie wasn’t a real friend. Eddie has gone insane and it’s time to fight so someone can get hurt.

We go to Rockstar Pro Wrestling in Dayton, Ohio where OVE (VERY popular here) calls out Cage. They get a fake Cage, complete with a fake title belt. Sami makes fun of his size and the fake Cage does the claps, but the beatdown is on. Callihan gets a pin with Dave Crist putting on a referee shirt to count the three.

Eli Drake goes to a law office….and it’s a broom closet with Joseph Park eating lunch. Park offers to represent Drake’s lawsuit against Impact Wrestling because they could own the company. Drake seems to agree before leaving.

Gama Singh praises the new Hit Squad but run into Scarlett Bordeaux. Gama hits on her and speaks his language. Raju says that means he’s been married 45 years and is a happily married man.

Tessa is defending in a Bound For Glory rematch. Taya runs her over to start and sends her into the corner but Tessa is out of the way before the running hip attack can hit. Instead Tessa drops her on the floor and that means a suicide dive to knock the barricade all over the place. Back from a break with Tessa cranking on both arms and putting a boot on the back of Taya’s head. Tessa kicks her in the ribs to cut Taya down again and there’s a running knee to the back for two more.

Magnum misses though and Taya takes her into the corner for a kick to the head. Taya gets two off a spear and a suplex is good for two more. A cutter out of nowhere drops Taya but she’s right back with a curb stomp. The moonsault hits perfectly for two and Tessa bails to the floor. Taya takes her down with a high crossbody so Tessa punches the referee for the DQ to save the title at 13:41.

Result: Taya Valkyrie b. Tessa Blanchard via DQ when Blanchard punched the referee (13:41)

Video on Johnny Impact vs. Killer Kross for the World Title next week. Impact knows Kross is a different kind of challenger because he seems more interested in hurting people than anything else. It’s going to be harder for Kross when Johnny is staring him in the face though.

Classic Moment of the Week: Candice LeRae vs. Gail Kim on Impact in 2013. They actually show the finish for once.

The Lucha Bros aren’t scared of the OGz. Cero miedo you see.

Cage says he never got an invitation to Ohio but he’ll come next week and bring the real X-Division Title.

Page and Sydal are challenging. Ortiz starts with Sydal and that means a lot of talking/shouting at each other. It’s time to get violent though so Ortiz throws him into the corner for some stomping and brings in Santana for the assisted moonsault. Page comes in and gets armdragged down but catches Santana with a gutwrench faceplant. It’s off to Sydal to talk about showing LAX the way and stare at Konnan. The trash talk is enough for a running flip dive from the apron from Santana to take out both challengers as we take a break.

Back with Santana in trouble as Page holds him for a knee to the ribs from Sydal. Page gets smart by knocking Ortiz off the apron but takes too long, allowing Santana to send him into the corner and dive over for the hot tag. Everything breaks down and Ortiz hits a rolling clothesline (shades of Konnan) on Page, followed by a northern lights suplex for two. The challengers hit stereo kicks to Ortiz’s head for two but it’s a suplex/backbreaker combination (started like a Magic Killer but Ortiz shoved Sydal up and Santana suplexed him onto Ortiz’s knee) for the pin to retain at 13:11.

Allie’s reflection if flickering when she stops to apologize to Kiera Hogan for snapping last week. Kiera doesn’t believe there’s nothing wrong with her and a mini argument breaks out. Allie finally admits that there is something wrong because she’s been losing it since they went to the undead realm. Kiera assures her that they’re together until the end.

I don’t think there was a bell but Pentagon knocks him to the floor to start anyway. Back in and some more kicks have Homicide in more trouble until he snaps off some clotheslines. A Backstabber out of the corner sends Homicide outside and there’s the superkick from the apron. Homicide is fine enough to run back inside for a flip dive into the apron and there’s a middle finger to the crowd.

A tornado DDT gives Homicide two but Pentagon slips out of a superplex attempt and ties Homicide in the Tree of Woe. That means the Alberto double stomp, followed by more kicks to rock Homicide. Back up and Homicide tries the Gringo Killer but gets reversed into a rollup for the pin at 5:51.

Post match the big beatdown is on with Hernandez running in, followed by Fenix and King to leave the Lucha Bros laying. 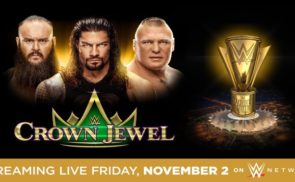 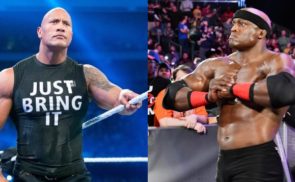 Rumor: Bobby Lashley vs. The Rock Penciled in For WrestleMania 35