Tonight is the first night of a double week Genesis special. There are a lot of matches set up for the next two weeks but it’s not clear which are tonight. We’ll be getting some combination of Ethan Carter III vs. Sting, Kurt Angle vs. Bobby Roode in a cage, James Storm vs. Gunner for the Feast or Fired case and Bully Ray vs. Mr. Anderson. TNA usually nails these Clash of the Champions style shows so let’s get to it.

We open with a very nice tribute to Mae Young with Tazz saying some kind things about his time with her. Nothing wrong with that.

Recap of the unification match from last week.

Spud is in the ring to insult Alabama and introduce Dixie Carter, in case you didn’t get enough of her last week. We get the usual don’t cross the boss speech before Dixie gives us our second recap of last week’s events. The fans want AJ but Dixie says tonight is about the new champion. Magnus comes out to do the same speech you’ve heard a dozen times about how this is a new era and calls it the Reign of Magnus. He hands Dixie one of the titles because we wouldn’t be here without her.

Dixie says there are some others to thank and brings out the BroMans, Zema Ion, Gail Kim, Lei’D Tapa, Bad Influence and Bobby Roode. Tonight is the beginning of Dixie Carter’s TNA, but for that to happen, everyone has to stand tall and united as one. The only amusing part of this: as Dixie talks about winning tonight, Spud can barely hold the TNA title belt because he’s so small. That guy continues to entertain me. Dixie brings out Ethan Carter III in pink ring gear, making him look like Rick Martel. Before Ethan can say anything, the lights go out and Sting is in the crowd, pointing the bat down to the ring as we take a break.

Back with Sting in the same place, asking if this is the future that Dixie is talking about. There are a lot of people in the back that can’t be bought no matter what. They have a thing called honor which is something Dixie can never have. Another amusing note: Sting is standing in front of a No Standing sign. Sting talks about bringing Magnus into the Main Event Mafia because he’s the future of wrestling.

No one thought he would sell out though, and that’s part of why this is a house divided. Sting says “we” will fight back tonight but Dixie says she only sees him. Samoa Joe, ODB, Eric Young, James Storm and Joseph Park hit the ring for a fight, soon to be joined by Gunner. Eventually the ring is cleared out except for Sting and Carter with Sting holding the bat up to Carterh’s chest and blasting him in the ribs as we take another break.

Back with the good guys ruling the ring and the heels cowering on the ramp. Joe says they’re here for a fight and not leaving until they get into one. Spud, in pink pants no less, brings out Brian Hebner, saying Joe might just get what they want. We’re getting a twelve man tag RIGHT NOW.

Joe pounds away on Zema Ion to start as everyone else fights on the floor. We get the always cool sidestep from Joe to avoid a middle rope cross body. ODB and Tapa get into the ring for a few moments until Storm and Daniels come in instead. There have been no tags and only now are a handful of people getting on the apron. Gunner throws Kaz to the floor and now there’s no one in the ring.

Eric and Robbie get into the ring as Joe is now on his third corner of the match. Young and Park double elbow Jesse but Robbie breaks up Eric’s top rope elbow. Zema sends Eric to the floor but turns around to see ODB grabbing her chest. A fall away slam sends Ion flying but Tapa runs ODB down, knocking her to the floor. Daniels comes in to work over Young and gets two off a leg lariat.

Young comes back with a belly to belly suplex and it’s off to Joe for some fat man power. The backsplash gets two on Daniels with Kaz making the save. Joe dives through the ropes to take out the Bro Mans as a lot of things break down. Kaz breaks up an attempted Park dive but busts Park’s lip open in the process. For the first time ever, Park goes after his partners by taking down Gunner and Storm, leaving Joe to put Daniels in the Clutch for the tap out at 7:32.

Velvet Sky is seen talking to Austin Aries until Chris Sabin comes up and demands to talk to her in the ring.

Kurt Angle arrives and is looking for Dixie and/or Al Snow, the latter of whom told Angle that he had a family emergency.

Sabin is in the ring to yell at Velvet for having secret meetings with Austin Aries but the man himself interrupts. Aries calls Sabin the worst boyfriend ever and says that even though he’s a vegan, he might make an exception for a piece of pigeon pie. Velvet looks flattered and Aries keeps up the charm by calling Velvet an extremely hot woman.

Chris cuts Aries off by saying he tells Velvet what to do, but Aries says he’s been telling Velvet to do what she wants to do. Sabin says she’s his and gives her a little spank to prove it. Austin wants one more match with Sabin for the title and Velvet locked in a small cage at ringside. Sabin says no, but Velvet takes the mic and says she’ll do it. She goes off on Sabin by saying she never wanted to be involved in this. Sabin has treated her like garbage lately, so if he loses next week she might be looking for someone else.

Angle has already changed into his wrestling gear and is still looking for Dixie.

Ethan Carter practices his catchphrase when Magnus comes in to say believe in yourself. Magnus got to the top by himself and Ethan can do the same.

Bully Ray comes to the ring for his No DQ match with Anderson but Ken jumps him from behind as we go to a break before a bell.

No DQ. We come back from a break with Anderson ramming Ray (back in his old pre-Aces attire and music) into the announcers’ table and heading back inside, only to have Ray block the Mic Check. A double clothesline puts both guys down as Tazz talks about Anderson wearing the hospital wristbands for his newborn twins. Both guys bring in chairs but it’s Anderson getting in the first shot.

Ray comes back with a spear to put both guys down again and grabs his chain for a whipping. An elbow drop with the chain wrapped arund the arm gets two on Anderson but Ray stops to yell at Earl, allowing Anderson to knock Ray’s chair into his face with a chair of his own for two. Anderson pulls out a piece of a barricade that is clearly made of plastic, only to have it kicked into his face.

Ray misses a splash, allowing Anderson to go up for the Swanton. He hits the barricade as well but comes back with a Mic Check onto the “steel” for two. Anderson sets up a table in the corner and hits a Regal Roll through the wood for another two count. These kickouts are getting surprising. Another table is set up but Ray comes back with a Rock Bottom for two of his own. Bully pulls out the lighter fluid but takes too long to yell about Anderson’s newborns. A Mic Check puts Ray down but Anderson gos to light the table on fire instead. Ray hits a quick low blow and piledriver for the pin 9:40.

Angle finds Al Snow and demands to know what happened last week. Al says he was just following orders and gets thrown down.

Post break Angle is in the ring to demand that Dixie come face him right now. She went too far by bringing his family in and here’s Dixie to respond. Kurt goes on a rant about how Dixie isn’t the same person she used to be and how wrong it was to bring Kurt’s wife and kids into this situation. Dixie says she did it to protect him because he would have gotten hurt out here last week, meaning he couldn’t make her any money.

She doesn’t want him to be like AJ or Jeff Hardy and did what she did because it was best. Angle says he isn’t on her team but says he’ll be out here for the main event. Dixie postpones the match until next week and has Angle taken out by security. Roode comes in off the distraction and lays him out with the Death Valley Driver (dubbed the Roode Bomb).

Madison is challenging but is still beaten down from the attack from before the break. Kim beats her down even more by stomping away in the corner but Madison comes back with a rollup for two of her own. Madison can’t shake off all of the punishment from earlier though and staggers down off a forearm to the head. A shoulder block sends the champion to the floor but Tapa runs Madison over and chokes her down. Tapa is finally ejected but Gail does just fine by putting on the Figure Four around the post. The referee breaks it up and Rayne comes back with a flapjack and the Rayne Drop for the pin and the title at 4:00.

Dixie is with The Wolves (Eddie Edwards and Davey Richards of course) and offers them a tryout match next week. However, they’ve already signed contracts offered to them by a TNA investor. Eddie hands her an envelope, saying it’ll change everything. Oh dear.

We run down the card for next week’s show.

Spud is guest referee to really keep the deck stacked. Sting takes Carter into the corner and is immediately warned for his actions. Carther does the same and nothing happens as you would expect. A dropkick sends Carter to the floor and Sting rams him into the steps for good measure. Back in and Spud gets in the way of a Stinger Splash attempt, allowing Ethan to take over with right hands of his own.

Sting avoids a splash and puts on the Scorpion but Spud jumps on his back. Instead Sting hits the Death Drop but Spud still won’t count. Sting tries to force Spud’s hand down but Magnus pulls Spud to safety. The champion takes his shirt off to reveal a referee’s shirt. Ethan uses the distraction to roll up Sting and Magnus makes a fast count for the pin at 4:58.

Post break Sting says he wants one shot at the title and will do anything to get it. Magnus says Sting lost at Slammiversary and can’t get a shot, but Sting appeals to his pride, saying Magnus must want to earn the title. He says men wear belts, so Magnus needs to stop being a boy. Magnus gets in the ring and says it’s not going to work, but offers Sting a deal: next week it’s Sting’s contract vs. the title. Sting accepts to end the show.

This concludes our live coverage for Impact Wrestling.  Make sure to join us tomorrow night at 8pm EST for Smackdown. 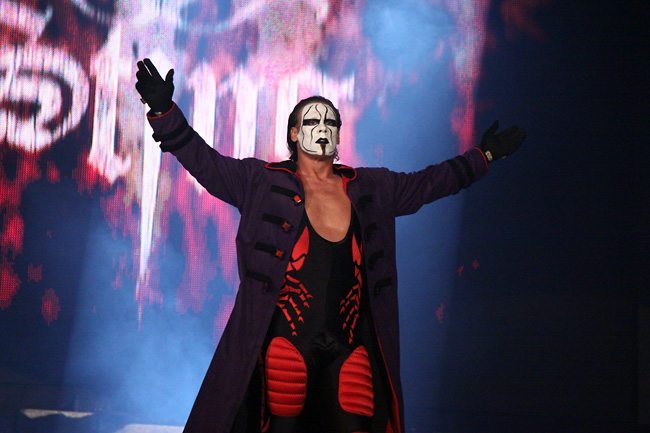