We close out the year tonight with the fallout from last week’s Final Resolution which saw Magnus (in theory) join up with Dixie as the new corporate champion. This should mean the imminent return of AJ Styles and the unification match for the two titles. It should also be interesting to see if TNA starts having more matches during the show or sticks with around three plus a lot of talking. Let’s get to it.

After the usual recap of last week’s events, here’s Spud in the ring to get things going. He gives a very elaborate introduction for someone very important to all of us: Dixie Carter. She talks about how great the last seven days have been and talks about how Santa didn’t deliver the title to Jeff Hardy like the fans wanted him to. That doesn’t matter though because the right man wanted. The fans sound like they want AJ.

Dixie has a major announcement that she’s been hyping up all week on social media but Jeff Hardy cuts her off. Jeff has some complaints to make but Dixie cuts him off. The fans aren’t interested in what Jeff has to say so he threatens Spud for what he did to Jeff last week. Spud goes all pompous Brit on Jeff and orders him out of the ring. Spud is sent into the corner but EC3 runs out to jump Hardy, knocking him to the floor. Dixie loads up the announcement but here’s Sting to interrupt as well.

Carter and Spud roll to the floor like proper cowardly heels should and Sting grabs the mic. He’s tired of entitled pipsqueaks getting everything they want, so Sting isn’t leaving until both he and the fans get what they want: Sting beating the tar out of Ethan Carter. The Icon wants Carter/Spud vs. Sting/Hardy but Dixie says no way. Dixie says she’ll give Sting a tag match but doesn’t say who is in it. Her music comes on but she wants to make her announcement. The music keeps going as we take a break.

Back with Dixie trying to make the announcement again but this time Gunner interrupts. Gunner wants his title shot right now but Dixie turns him down because Magnus is in England. Gunner grabs the mic from Dixie and says to let Magnus know that the cash-in is coming sooner rather than later. Dixie tries for I think the fourth time to make the announcement but here’s James Storm to interrupt this time. James thinks Gunner owes him something but Gunner disagrees.

Storm talks about Gunner costing him the match against Bobby Roode when Storm asked him to. Gunner says he did it for Storm’s own good because Storm was in a bar fight the night before. Storm says that may be true but he wants to know who told Roode about the bar fight. James thinks Gunner is the stooge and wants a match for that case tonight. Dixie says ok because Gunner interrupted her. She’s not ready for the announcement though so everyone has to wait for later.

For the Feast or Fired case. They shove each other to start until Gunner sends Storm into the corner but walks into a headlock takeover. Gunner shoves him into the corner again but Storm hits a quick enziguri from the apron. A running forearm gets two on Gunner and a facebuster gets the same. Gunner gets in a knee lift to the ribs and puts on a quickly broken chinlock as the announcers talk about the announcement. Storm comes back with a tackle/spear to send both guys out to the floor…..for a VERY fast double countout at 4:58.

Result: James Storm vs. Gunner went to a double countout (4:58)

They fight to the back as referees fail to pull them apart.

Brooke is annoyed at Bully Ray for annoying her since he doesn’t seem to want her anymore. That’s fine with her as she’ll just go air all his dirty secrets in the ring. Bully says her name but that’s it.

Magnus talks about all the bad characters he’s been given over the years which counts as paying dues. He talks about being called the future, meaning he’s not ready yet “because some people weren’t ready to hang it up yet, BROTHER”. This felt like part of a shoot interview.

Here’s Brooke to demand answers from Bully. She understands that he’s mad at her for throwing the hammer, but she’s not accepting full blame for everything. Here’s Ray in a hoodie and sunglasses as Brooke insists that this can be fixed. It’s neither of their faults that Aces and 8’s ended but Ray turns his back on her. Brooke yells at him for not respecting her and reminds him that Ray said throw the hammer. Ray was supposed to be her ticket to the big time but now he’s that weird high school kid that has no friends.

Brooke says she’s no one’s property and that she’s done but Ray grabs her arm. Ray says she’s done when he’s done with her but he doesn’t blame her for anything. After all, she’s not the smartest girl in the world but she was there for certain uses. She wasn’t even that good at those things thought and sometimes he would close his eyes and think of Brooke #1.

He could piledrive her right now but instead he’s going to use her to spread his word. She knows how evil he can be, so she can let everyone know what’s in store for them. Ray takes off the glasses and says it’s going to be a lot worse as ominous music plays. He’s done with her.

Joseph Park is scared to have a Monster’s Ball match.

Magnus thinks being in the Main Event Mafia was the way the Mafia kept him on a leash.

Park is scared but Young says believe in himself. Eric says hit the music and it’s the old Abyss song. He gives Park Janice to make him feel better.

Monster’s Ball, meaning anything goes with weapons at ringside. Park has Janice while the team grabs a kendo stick and crutch. Bad Influence surrounds Park but he swings Janice…and drops it, allowing the heels to score with shots to the ribs and back. Park gets taken down and Kaz hits a backsplash before more weapons are thrown inside. Kaz throws in a trash can which hits Park in the head but there’s no blood yet. Daniels stomps on Park in the corner and chokes him with a cord.

Kaz loads up a chair shot but Daniels stops him to prevent blood. Park comes back with his usual basic offense and picks up a kendo stick. Kaz gets in a cheap shot with a trashcan lid though and Bad Influence takes over again. They head outside and send Park into the steps but have to stop and check for blood again. Back inside and Park backdrops Daniels over the top before splashing a trashcan lid into Kaz.

There’s a Boston crab on Kaz’s damaged ribs but Daniels comes back in with a crutch to break the hold. Eric Young finally comes out for some moral support but Park says he needs help. Young loads up some right hands to Park’s head but Bad Influence makes the save. Kaz tries a kendo stick shot but Park shoves him out of the way to take the shot to the forehead. We’ve got blood, kendo stick shots, Shock Treatment to Kaz, Black Hole Slam to Daniels for the pin at 10:24.

Jeff Hardy is on the phone with his wife. He’s had a plan for a few weeks and it goes down tonight.

Magnus talks about the BFG Series being proof he could hang with anyone. The loss to AJ was what changed him because he never wants to feel that again.  The win over Sting at BFG was the biggest night of his career.

Before the match Gail tells Madison to stay out of her business. ODB can’t slam her so she chops at Tapa instead. Tapa sends ODB into the corner and slowly pounds away before kicking ODB in the face. ODB avoids a middle rope seated senton (which would have missed if she hadn’t moved) but still can’t drop Tapa with shoulder blocks. Gail throws the title belt into the ring and pulls ODB’s hair to distract her, allowing Tapa to hit the TKO for the pin at 4:16.

Gail says that was a lesson for Madison.

Sabin and Velvet have a nice moment in the back. Chris has an X Title match next week and he blames Velvet for losing the title in the first place. She doesn’t think she can help him so he says he’ll find a girl that can.

Magnus talks about having Dixie in his corner and how their partnership will last for years.

Carter and Spud want nothing to do with Sting so they both tag out with Jesse eventually getting the start. Sting hiptosses him down but Zema Ion grabs Sting’s leg to get an advantage. Carter comes in but Sting gets up so it’s off to Robbie before any contact is made. Jeff comes in with a middle rope splash for two and a backdrop to send Robbie out to the floor. Carter accidentally tackles Godderz to the floor, setting up a dive (with Sting as a springboard) to take out all four heels at once.

The four of them pull Jeff down and stomp away for their first advantage as we take a break.

Back with Godderz getting two off a knee to the ribs. A powerslam gets the same and it’s back to Robbie who gets two off a clothesline. Jesse comes back in for a half crab and Sting is suckered in, allowing a four man beatdown on Hardy. Carter mocks Sting with a Stinger Splash but Jeff comes back with a jawbreaker. Sting comes in and cleans house, even with Spud on his back in an impressive feat. Sting keeps beating everyone up but Carter grabs a rollup for the clean pin at 13:30. Taz said he had tights but I didn’t see them.

Post match Hardy gets on the mic and thanks Sting for getting him into the business. Last week he was the better man but lost because of the politics. The fans chant for Hardy but he says the fight’s all gone. This was his last match in TNA and he’s leaving until the sun shines on this dark kingdom. Hardy says he loves the Creatures, takes off his shirt, and leaves. 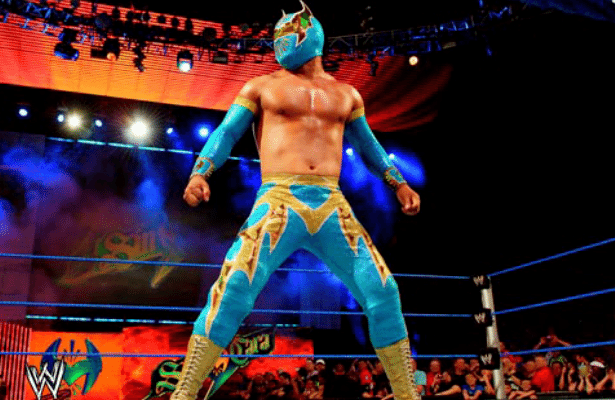 Update on the Status of the Original Sin Cara 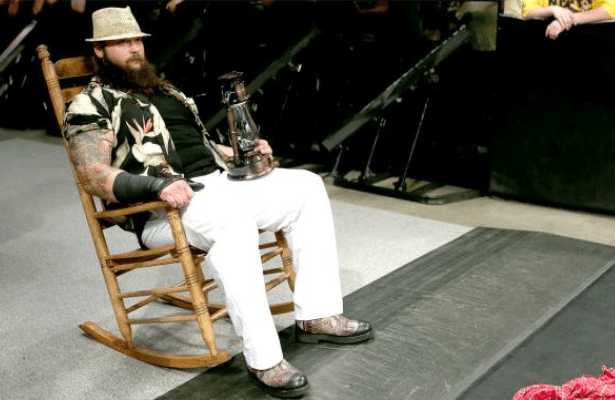