Tonight is the Final Resolution special with a double main event. The main stories are the Dixieland match with Magnus facing Jeff Hardy in the world title tournament final and Kurt Angle vs. Bobby Roode in a 2/3 falls match which might be the blowoff to their feud. The other question is where AJ Styles fits into this whole picture, assuming he still has a job in this company. We also get the Feast or Fired reveals tonight.  Let’s get to it.

We open with a recap of the AJ fiasco which set up the tournament.

Magnus is looking for Jeff and Dixie but neither are here. That’s fine with him as he’s got something to say that will get everyone’s attention.

Here’s Magnus to talk about how much he loves this business just like everyone else in the back. That’s why they’ve all worked so hard to get where they are today. He’s made his living as a wrestler here for five years and has learned one thing: money is power. Magnus understands all that but thinks the respect is what really matters. However, he isn’t sure if Jeff Hardy feels the same. Jeff might have slayed his demons, but maybe there’s one little demon coming back in: greed.

Magnus wants an explanation for why Hardy was seen having drinks with Dixie Carter last week, so here’s Jeff to respond. The Brit says Hardy has the fans fooled but Magnus remembers 10-10-10 when Jeff sold out to become world champion. Fans: “WE DON’T CARE!” Jeff basically tells Magnus to mind his own business and drops the mic.

We recap Roode vs. Angle with Roode getting the better of Angle every time since BFG.

Chavo Guerrero is excited about his chances in Feast or Fired. Zema Ion comes up and makes annoying noises.

2/3 falls. Aggressive feeling out process with both guys countering everything the other one has until an ankle lock attempt sends Roode to the ropes for a break. A belly to belly sends Roode tot he floor but Angle throws him back inside for the rolling Germans. Roode avoids the Angle Slam and hides behind the referee to hit Angle low. A Death Valley Driver gives Bobby the first fall at 4:10 and we take a break.

Back with Roode missing a knee drop and Angle coming back with forearms and a release overhead belly to belly. Roode sidesteps a charge to send Angle’s shoulder into the post but the Crossface is countered into the Angle Slam for the pin at 10:00 total. Roode tries to leave but Angle throws him back inside for more rolling Germans but Bobby snaps on the Crossface. Angle counters into a rollup but Roode puts him right back in the Crossface.

Kurt escapes again but Roode DDTs his arm down and puts the hold on for the third time. Angle rolls out one more time and puts on the ankle lock. Roode is about to tap so Angle switches over to a Crossface. Bobby fights out and tries another Death Valley Driver, only to have Angle slip behind the back and hit the Angle Slam for two. Back to the ankle lock but Roode rolls through and grabs the rope for the pin (just like Angle did to Roode at BFG 11) at 14:55. Kurt even puts his face in his hands like Roode did two years ago.

Angle looks shell shocked in the back and is terrified by the idea of Roode having his number.

Ethan Carter III isn’t worried because he knows the boss. His phone rings and he walks off, but the camera follows him. It’s Dixie who can’t fix things if Ethan gets fired. Thankfully he has it on speaker and up to his ear.

Eric Young has a gift for Abyss.

After a video recapping Eric telling Park he’s Abyss, Young calls out Park for a chat. Park thinks Eric is wrong, but Eric has made him a match next week with Park facing Bad Influence. Joseph rightfully freaks out but Eric makes it even worse: it’s Monster’s Ball. Park says that’s Abyss’ match but Eric has gifts for Park. Park gets a chair, a bag of thumbtacks, and barbed wire. He’s still not convinced, but Eric has saved the best for last. Park is sent under the ring to find….Janice, the 2×4 covered in nails. Joseph gets very serious and says he’ll do it.

We look at Magnus accusing Hardy earlier before going to Hardy in the back. He looks upset when Samoa Joe sits down and asks if there’s any truth to what Magnus suggested. Hardy is offended and leaves.

It’s time to reveal Feast or Fired in a room backstage. Dixie comes in and talks about how amazing an idea this is before going to Ion for the first reveal. Zema gets an X-Division Title shot. Gunner goes next and says Storm will be his partner if he gets the Tag Title shot. Instead it’s the World Title shot and Storm is MAD. That leaves Chavo and Carter with Chavo saying no matter what happens, he’s still a Guerrero. Carter says he’ll never lose and never be fired.

Before we get the reveal, Sting comes in and is thrilled that Ethan might be fired. The dramatic music actually works here for a change. Sting offers Ethan a deal: he’ll take the case and whatever it contains in exchange for one match with Carter. Ethan takes the case and gets the Tag Title shot, meaning Chavo is fired.

Magnus says he’ll win the title and all questions will be answered.

Tapa throws Madison down to start so it’s off to ODB for the power showdown. ODB gets slammed with ease and it’s off to Gail as the announcers talk about a kickboxing show. The champion lays in some kicks before it’s back to Tapa for some choking. Tapa misses a charge in the corner and it’s off to Madison for some house cleaning. ODB is sent to the floor but Madison counters Eat Defeat into a backslide for the pin at 5:50.

Sting tells Jeff that he’s been where Jeff is before and to play it cool.

Dixie has assigned Spud to get a new World Title belt made.

We recap the tournament.

Jeff Hardy comes out for the match and addresses the accusations. Three years ago he made a mistake but he’s a different man now. Yeah he met with Dixie, but he thought about his family and his fans so Dixie’s offer is rejected because nobody owns Jeff Hardy. This brings out Dixie who says Hardy owes everything he has to her. She’s the one who stood by him and all that matters is her company, not Hardy’s family. Jeff needs Hardy more than she needs him so she’s going to watch from ringside.

This is Dixieland, meaning it starts in a cage and the winner has to escape and climb a ladder at the top of the stage to pull down the title. Magnus sends Hardy into the corner to start but gets caught in a headscissors. A running forearm in the corner has Magnus in trouble and Jeff rains down right hands. Magnus comes right back with a running clothesline but Hardy avoids the top rope elbow. Hardy tries to leave but shoves Magnus down and misses the Swanton. EC3 is watching at the ramp as we take a break.

Back with Hardy being pulled back through the camera hole before kicking Magnus in the chest to put him down. Hardy goes to climb out but drops a Vader Bomb from the middle of the ropes to keep Magnus down. The Twist of Fate looks to set up a second Twist of Fate but Magnus shoves him off and chop blocks Jeff’s knee. The Texas Cloverleaf has Hardy in trouble and a Snow Plow sets up the top rope elbow from Magnus.

Hardy fights up and hits a quick Whisper in the Wind before climbing up for a HUGE Whisper from the top of the cage to put both guys down again. They both climb over the top but EC3 goes to stop Magnus. The Brit fights him off but Hardy goes after Carter anyway because he wants to win fair. Magnus and Hardy slug it out on the floor but Hardy hits another Twist of Fate on the ramp. Jeff goes to the ladder but Dixie begs him to not go up. Hardy goes up anyway but Spud shoves the ladder down, sending Hardy down the ramp in an ugly crash. Magnus goes up to win the title at 17:43.

The Author….Dixie and company celebrate to end the show. 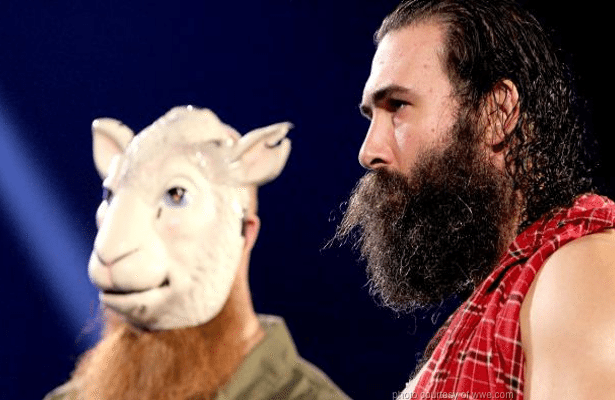