There aren’t many moments in wrestling history where you can say one word and have fans know exactly what you’re talking about. While there are a few here and there, none of them mean more than a night that changed wrestling forever and took place at “Survivor Series 1997”. You know where we’re going today.

We’ll start earlier in 1997 as Bret Hart began an amazing heel turn. For months and months, Hart complained about being screwed over and held back for wanting things to be like they were in the old days. At the same time, people like Steve Austin and Shawn Michaels were rising up the ranks with a new style known as attitude. It was a much more in your face time with everyone acting like tradition meant nothing and people like Hart were obsolete. 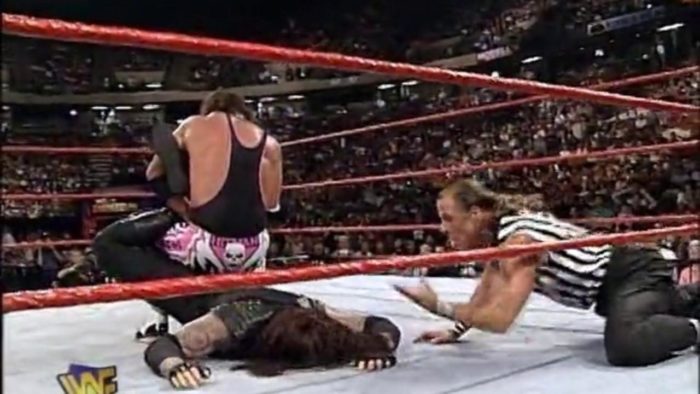 This led to the formation of the Hart Foundation with Bret drawing his closest friends and family together to help him fight off all these horrible, disrespectful forces. Eventually at “Summerslam 1997”, Hart won the WWF World Title from the Undertaker, thanks to an accidental assist from Michaels. Michaels would become #1 contender and the title match, as in Hart vs. Michaels II, was set for “Survivor Series 1997” in Bret’s home country of Canada.

At the same time, behind the camera, things were changing in a big way. Hart’s contract was coming up and, with Vince McMahon’s blessing, he was about to head over to WCW to make a fortune on a huge contract. At the same time though, Hart was still the reigning WWF World Champion. Now usually this wouldn’t be a problem but there was a major issue: Hart and Michaels hated each other. Like REALLY hated each other.

Depending on who you believe, the majority of the issues came from Michaels revealing a real life affair between Hart and Sunny (which both still deny). Due to their issues, Hart refused to drop the title to Michaels, or in Canada in general. This led to a major, major problem: how do you get the title off of Hart and onto Michaels in Canada on Hart’s last night in the promotion?

The ideas started going all over the place with ideas ranging from a DQ where Hart could hand over the title the next night on “Monday Night Raw”, losing the title at a house show in America over the weekend or some kind of a wacky finish to the pay per view match. Nothing could be agreed to though and time was running out with no decision in sight. 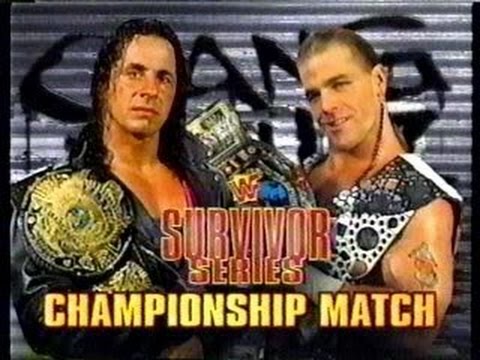 That brings us to the night of the show. As the match went on (Yeah there was a full match, not counting a long brawl before the bell rang. People tend to forget that it was actually going along really well beforehand.), the question was how could they get out of this. Near the end of the match, Michaels tried putting Hart in the Sharpshooter, Hart reached around to counter….and the bell rang.

McMahon, at ringside for no apparent reason, had demanded that the bell ring and Michaels was the new WWF World Champion. Hart spat at McMahon and wrote WCW in the air before destroying a lot of equipment to end the show. The tirade continued as Michaels was bailed out of the arena as fast as possible.

So what happened? The original finish was something like Hart countering into the real Sharpshooter and D-Generation X running in for the disqualification. However, McMahon screwed Hart over and went against their agreement. You could argue the reason why, but the likely answer is he didn’t believe WCW would take care of the title belt and were likely to trash it live on “Monday Nitro”. Fair enough, especially when you consider what happened with Alundra Blayze back in 1995 or Ric Flair back in 1991.

Neither went well and it was clear that Hart needed to lose the title somehow so this was what McMahon came up with. Hart would leave that night (after punching McMahon in the jaw, resulting in him tripping and breaking his ankle) and wasn’t seen again in the company for over twelve years. Eventually the two sides would get back on the same page but it didn’t seem possible for a very long time. I’ve never really been able to see Hart’s side of this. Hart’s contract allegedly gave him “reasonable creative control” over what would happen to him but refusing to lose the title in a certain country really doesn’t come off as reasonable to me. Yeah he was a big deal in Canada, but I can’t bring myself to feel sorry for him here. If they absolutely couldn’t change the title in Montreal, change it ANY TIME before then and go out in peace.

On the other hand though, if McMahon knew something like this was coming up, why put the title on Hart for as long as he did? Hart was easily the top star in the company at this point (you might be able to argue Austin but he wasn’t there yet) and there was good reason to put the title on him, but GET IT OFF OF HIM BEFORE SOMETHING LIKE THIS CAN HAPPEN! Why is that so complicated?

As important as the Montreal Screwjob was to Hart and Michaels, it was infinitely more important to the company as a whole. The incident allowed for the creation of the Mr. McMahon character with his famous “Bret screwed Bret” line which turned him into the biggest heel of all time and eventually set up the Austin vs. McMahon feud which had a hue hand in saving the company.

Over the years, the Montreal Screwjob would be referenced over and over again in multiple wrestling companies, including WCW the following month at “Starrcade 1997” (what a horrible mess that turned out to be), the WWF at “Survivor Series 1998”, WWE on their “ECW on SyFy” show in 2006 and multiple times by TNA. If nothing else it’s certainly become famous for how many times it’s been imitated.

If there’s a more infamous night in wrestling history than this one, I have no idea what it is. The ending to “Survivor Series 1997” changed wrestling forever and will never be approached in importance again. Its impact would be felt for years and the ending would be used on WWE pay per views all the way until “Breaking Point” about twelve years later (the fact that it was in Montreal was just a coincidence I’m sure). If the Survivor Series wasn’t made a big deal in 1996, the following year certainly did the trick. Since everything else after this pales in comparison, we’ll be back on Tuesday with a more general look at the series. 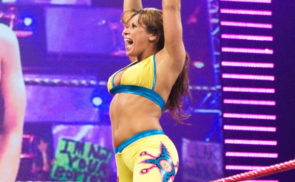 Triple H: “Mickie James Was Not The Consolation Prize” 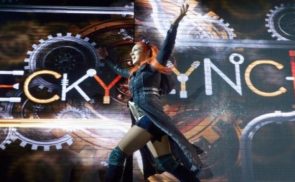 Could Becky Lynch Turn Heel in Near Future?