That might not be good. You never know when you are going to see someone get injured in wrestling. It is one of the worst parts of wrestling but there is no way around the possibility. With wrestling being a physical sport, the threat of an injury is always there, no matter how safe a wrestler may be. Somewhere along the lines, almost everyone gets hurt and it might have been the case again this week.

In its still rather brief existence, AEW has had few greater success stories than Britt Baker. It is an idea that sounds perfectly simple: Baker is a young, talented wrestler who also happens to be a practicing dentist. That is the kind of story that writes itself, but Baker never really took off until she turned heel and then it was off to the races. However, that race might be delayed due to an injury.

During this week’s Dynamite, Baker seemed to be injured during a tag team match. While teaming with Nyla Rose against Hikaru Shida and Kris Stadtlander, Rose was slammed on Baker’s leg in the corner. Baker was instantly in pain and eventually tagged out without returning. She was checked on by the ringside doctor during the match and was later helped to the back after the match. Baker is currently scheduled to face Kris Stadtlander on Saturday at Double Or Nothing.

It was a nasty landing. Check out the match where Baker was hurt and one of her better days:

Opinion: This would be a horrible situation as Baker is starting to find her footing as a heel, which seems to be the big answer that she has been looking for. I’m not sure how bad the injury is but hopefully it winds up being something short term rather than serious. A knee injury can be horrible, but the most important thing here are the details, which might take some time to find. Odds are she is out of the pay per view at the moment, and that is probably for the better.

Have you been enjoying Baker so far? When will she be Women’s Champion? Let us know in the comments below. 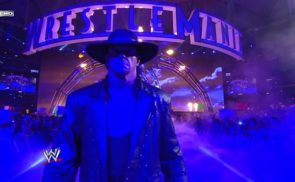