And there it is. With all of the changes taking place about the status of WrestleMania, one of the biggest things that has gone under the radar is WrestleMania itself. The show is still taking place and that means we have to get ready for the actual event. With less than three weeks to go before the show, they have a few things left to set up and that was the case with this week’s Monday Night Raw.

We are coming up on WrestleMania and a lot of the stories have already been set up. There are still some matches that need to be set in stone though and one of them is Undertaker vs. AJ Styles. Last week on Monday Night Raw, Styles made things a lot more personal by talking about Undertaker’s personal life, including Undertaker’s wife Michelle McCool. That was not going to go well and things are now official.

It’s a long time coming. Check out how we got here:

Opinion: This is one of the matches that you knew was coming and it makes sense to finally set things up. Undertaker is all but destined to be a part of WrestleMania most years and you know he isn’t missing back to back events. The match has some potential and it is nice to see a match take place for the first time ever. They could have a heck of a match and it wouldn’t shock me to see such a thing happen.

How do you expect the match to go? Who do you see winning? Let us know in the comments below. 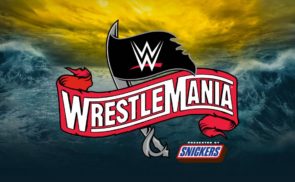 EXCLUSIVE: WrestleMania 36 Could Be Having Some Major Format Changes

Another Big Match Added To WrestleMania